" She'll get the house. Doesn't matter. I could never find it anyway."

Hey pallies, found this cool retellin' of this Dinostory as part of the prose "Marriage Hollywood Style" at the blogg "TV show channel, tv guide, tv links, tv online." (To checks out the whole blog post on Hollywood marriages clicks on the tagg as usual)

It's the familar Dinotale how our Dino never wanted to have parties at his pad while married to the Jeanne. Loves how our Dino called the cops to get the partiers outta his place.

But this story always gives me Dinopause, 'cause after our Dino cuts the ties with the Jeanne he took to the disco scene 'specially The Candy Store Discotheque where he was seen with his young amores...specially Cathy with the candified K. So am includin' the recently found Dinopix of our Dino and Miss Cathy dancin' away at The Candy Store.

Gotta 'fess up that I does loves to see the changes in our Dino's lifestyle once in freed himself from the Jeanne....he became more and more his cool, hip, and swingin' self. Dinodelighted, DMP


"Sometimes even a little partying is too much. When Dean Martin announced that he was divorcing his wife Jeannie he joked," She'll get the house. Doesn't matter. I could never find it anyway." One sore point during their union was Dean's unwillingness to have any company over, his main concern was getting up early to play golf. One time Martin reluctantly acquiesced to his wife's request to have a social gathering at their house. At ten pm Dean excused himself and went upstairs to his room. A half hour later Jeannie knocked on his door," Dean come out! The police are here." An apologetic officer explained that they had received several calls about another loud obnoxious party at the Martin household. "But we never have parties," said Jeannie. "Never mind that Jeannie. You heard the officer. OK, everybody out." The next day after rising early and playing a nice round of golf, old Dino confessed to her that he had made the phone calls using several different voices." 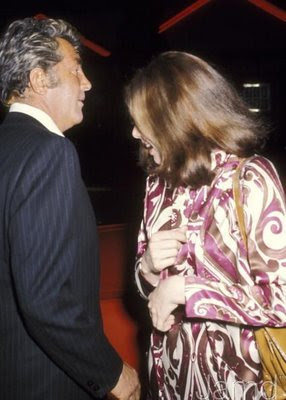 Hey pallie DMP. I know what you mean. I love Dino of any era, but this is the time period that is my favorite. He is definitely the coolest, hippest & randiest.

Hey pallie Keith, glads to know we are of like Dinomind on this..loves to see our Dino swingin'...