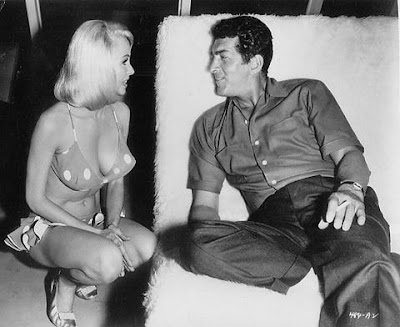 Hey pallies, like it took me Dinoforever to make a Dinodecision on the Dinopix to use for the March entry in the Dinocalendar...but here is it. March signals the start of spring on the calendar and spring reminds me of chicks....ever heard the term spring chickens....anyway....I decided to select a cool pix of our Dino with a very lovely young chick who seems to love our great man very, very much...and Dino seems to be pleased with her as well. Pallies, let me know what you think of this Dinochoice...and I like make a Dinopromise that I will post an April Dinopix early next Dinomonth.
Posted by dino martin peters at 4:15 PM 8 comments:

Dylan Jones on Dino: the true leader of the Rat Pack

Hey pallies, Dylan Jones, editor or GQ has written this wonderful tribute to our Dino in UK's Daily Mail. If you wanna read it in it's orginal form, just click on the link to this Dinopost. Loves to find others who loves our Dino like we do!!!!

Dylan Jones on Dino: the true leader of the Rat Pack
By DYLAN JONES

Now, you might think you're cool. You might be standing there in front of your full-length, bulb-framed, lava-lamp-shaped mirror, in your one-button, peak-lapel, rope-shouldered mohair midnight-blue two-piece feeling enormously pleased with yourself.

You may have just been given a pair of Thomas Pink gold-bullion cuff-links by your significant girlfriend, managed to approximate a fairly convincing spotted pocket handkerchief (the right way up this time) and treated yourself to a new watch with a face the size of Belgium, and therefore be thinking all is well with the world.

But let me tell you, my friend – you have nothing on Debonair Dino.

Dean Martin invented cool. For 20 years, from the late Forties to the end of the Sixties, he was the epitome of louche sang-froid, a singer, actor and genuine star who conquered Hollywood, television and Tin Pan Alley.

He was the first man to ever enjoy stardom on all four fronts of stage, records, television and film.

He liked a drink – indeed, towards the end of his career it was his defining characteristic, and he was rarely seen on television without a drink of some sort in his hand (his personalised numberplate read DRUNKY). And he liked his women.

But most of all, he liked breezing through life without a care in the world. He was a star not just because he could sing well or act appealingly, but also because he was the embodiment of relaxed, funny sexiness.

In a word that first came into vogue during his rise, he was Cool. With a capital C.

He dropped out of school because he thought he was smarter than the teachers. He delivered bootleg booze, served as a blackjack dealer, worked in a steel mill and boxed as a welterweight.

And then he became one of the biggest stars in the world.

Other Italian-style singers of the time worked hard to seduce the women in the audience. To him, that came naturally – sometimes too naturally.

He worked to seduce the men, winning them over, gaining their approval through the illusion of camaraderie.

And his uncaring air of romance reflected the flash and breezy sweet seductions of a world in which everything came down to broads, booze and money, with plenty of Amarone and linguine on the side – living high in the dirty business of dreams.

During the Sixties he refused to rehearse at all for his ridiculous TV show, instead showing up for the taping after a round of golf and winging his way through it, reading off cue cards and pretending to be drunk (sipping apple juice instead of JD). Happy days indeed.

I suppose my infatuation with Dino stems from the fact that I grew up in an environment in which he was rarely off the turntable.

From England's 1966 World Cup victory through to the first Moon landing, my early memories revolve around listening to Return To Me, Volare, Under The Bridges Of Paris, You Belong To Me and In Napoli on the American air force bases of East Anglia.

For me, these songs still define a certain kind of imported homespun sophistication, however ersatz it may be.

Also, while the whole Rat Pack ethos endures because it represents adolescence in perpetuity, Martin was more adolescent than most.

Among his Rat Pack buddies, Martin was always the joker, the Martini-drinking lounge lizard with the laissez-faire attitude and an ever-ready excuse.

What's more, he was the author of some of the best-remembered Hollywood bon mots. "I've got seven kids, and the three words you hear most around my house are 'Hello', 'Goodbye' and 'I'm pregnant'."

"You're not drunk if you can lie on the floor without holding on."

"I feel sorry for people who don't drink. They wake up in the morning and that's the best they're going to feel all day."

"It was a woman who drove me to drink, and come to think of it, I never did hang around to thank her for that."

"Hey, lady! Do I look all blurry to you? 'Cause you sure look blurry to me."

So next time you go shooting your cuffs, rolling your shoulders or pumping out your chest, think again.

Don't get above yourself, buddy, because in the grand scheme of things you're about as 'hip' as a Kula Shaker tribute band.

And when you're next about to venture out on the town, be sure to do the decent thing and put on some Dino before you leave the house.

You might never look like Dino, you might never have his luck with wine, women and song, but at least you can brush up on your karaoke.

Dylan Jones is the editor of GQ
Posted by dino martin peters at 4:29 PM 6 comments:

Hey pallies, here is a cool little Dinohistory Dinolesson on "That's Amore.' If you woulda like to view it in it's original form, just click on the link of this Dinopost. So great to be learnin' more 'bout our great man Dean Martin.


“That’s Amore” is a 1952 song by composer Harry Warren and lyricist Jack Brooks. It became a major hit for Dean Martin in 1953. Amore means “love” in Italian.

The song first appeared in the soundtrack of the Martin and Lewis comedy film The Caddy, released by Paramount Pictures on August 10, 1953.

The track that was used for the single released by Capitol Records was recorded on August 13, 1953 (Session 3098; Master 11694-6), with the orchestra conducted by Dick Stabile, at Capitol Records’ studios at 5505 Melrose Avenue, Hollywood, California. On November 7, 1953, Martin’s record of the song, with “You’re The Right One” (which was recorded at the same session as “That’s Amore”) on the flip side, peaked at #2 on the Billboard charts. The song was kept from the #1 spot when Les Paul and Mary Ford’s Capitol Records single “Vaya Con Dios” returned to the #1 spot after being knocked out by Stan Freberg’s Capitol Records single “St. George And The Dragonet”, which had been #1 for the past four weeks, after “Vaya Con Dios” had been #1 for the nine previous weeks.

The song remains closely identified with Dean Martin; That’s Amore was used as the title for a 2001 video retrospective of Martin’s career, and his son Ricci Martin entitled his 2002 biography That’s Amore: A Son Remembers Dean Martin. As an iconic song, “That’s Amore” remains a secondary signature song[1] for Dean Martin (second only to “Everybody Loves Somebody” of 1964).[1]

The arrangement of the 1953 hit was scored primarily for mandolins. The lyrics affectionately ridicule the Italian-American ethnic stereotype, with lines like “When the moon hits your eye/Like a big-a pizza pie/That’s amore”, “When the world seems to shine/Like you’ve had too much wine/That’s amore”, and “When the stars make you drool/Just like pasta fazool’/That’s amore.” Martin did not attempt to deliver the lyrics in an authentic Italian accent, but used the accent of an American trying to mimic Italian pronunciation.

Since the verse starts “In Napoli/where love is king,” the setting of the song is Naples, Italy. That is evident in the lyrics (cited, above) that contain what may be called jocularly either the best or the worst rhyme in the history of popular music–that is, the bilingual rhyme of “drool” and “fazool,” the Neapolitan dialect word, fasule, for the Italian fagioli–beans.


dino martin peters Says:
March 3rd, 2008 at 10:43 pm
Hey pallie, what a great bit of Dinohistory on one of our Dino’s greatest songs of amore. I so love the Dinoversion contained in “The Caddy”…so full of Dinolive! Thanks for sharin’ this…hope it draws even more to knowin’, lovin’, and followin’ our great man. Never was, never will be anyone as cool as the King of Cool…oh, to return to the days when Dino walked the earth.
Posted by dino martin peters at 3:34 PM 8 comments: