This Swinger Is Dean Martin's Son, Dorothy Hamill's Man and Maybe the Next Robert Redford

Hey pallies, and here is an earlier article from People 'bout Dino's beloved boypallie Dino Jr. In this piece of Dino prose we read some cool insights into our Dino by Dino Jr. includin' the one shared by Nick Tosches in his stellar Dinobio..."I don't know him very well. We have never had a tremendous heart-to-heart conversation." And there is so much more here as well such as Dino Jr.'s perspective on smokin' grass..."It thuds me out, and tennis means more to me than getting high."

So enjoys learnin' more 'bout our great man's great boypallie. And, as Dinousual, just clicks on the tagg of this Dinogram to go to the original site. Dinodevotedly, DMP 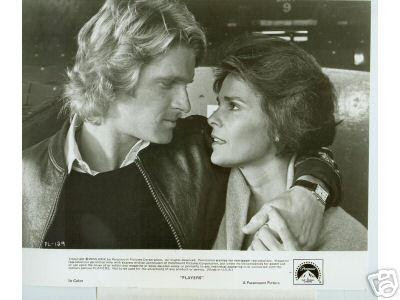 
If Dean Paul Martin, 26, has a fantasy about proving himself to the old man, it would be to wind up on Dino's TV dais—but as a tennis star rather than showbiz roastee. In fact, young Dino is so gone on the game that when producer Bob (Love Story) Evans asked him to star opposite his own ex-wife Ali MacGraw in the upcoming tennis film Players, Dean hesitated. "I'm just starting to cook with my game, and I've waited years for this," he explained. "This" was a two-year contract to play in the World Team Tennis league and a global ranking of about 250th at best. Actually, he's probably won more clippings for dating skating star Dorothy Hamill than for his skill on the courts, and Evans, a onetime actor himself, persuaded Martin to test. "They liked my look with Ali," allows Dean, who then accepted the role as long as he could stay for at least half the WTT season. "Dean would rather be Björn Borg than Robert Redford," puzzles Evans, "but I think he will be Redford."

"People assume that because of my father I would naturally fall into the entertainment world," says Dean. Raised in Beverly Hills, he is the oldest of three children from Dino Martin's second of three marriages. Dean got his blond, blue-eyed looks from his mother, Jeanne Biegger, and his footwork from Pop (who boxed at 15 as Kid Crocetti and later played baseball). "He taught me smoothness, a nonpanic, play-deliberate attitude," says Dean. "He is not as out-to-lunch as his image makes him. The truth is that he is very complex. If he drank as much as everyone says he does, he would be dead." Then Dino's son adds ruefully: "I don't know him very well. We have never had a tremendous heart-to-heart conversation."

Early on, the boy suffered the trauma of being a celebrity brat, and sports became his way to prove himself to his peers. By 11, he was being coached by tennis ace Pancho Segura, now Jimmy Connors' mentor. At 13, Dean abandoned the junior tourney trail to form a teenybop rock group—Dino, Desi and Billy—with Desi Arnaz Jr. and Billy Hinsche (later with the Beach Boys). They, incredibly, had several hits (remember I'm a Fool?), but Dean still regrets the interruption. "When I was out there rocking and rolling, Connors, Gottfried and Stockton were in the semis and quarters," he laments. Later at UCLA, Dean was on the same NCAA championship squad with Connors. Then, at 19, Dean dropped out of college to marry British actress Olivia (Death on the Nile) Hussey. They were divorced within four years. "If you have to go through such a thing, we did it the best possible way," he reflects. "There is no bitterness."

A versatile jock, Dean along the way played wide receiver ("extremely wide") on the semipro Las Vegas Casinos football team. "We weren't good, but we were real dirty," he laughs. Later he was recruited by the now defunct World Football League but instead returned to college, this time at USC, for premed and more tennis. "Pancho told me in tennis I had a chance, albeit slim," he says. "In football I could be over and done in one game."

In 1974 Dean was arrested for possession of unregistered World War II guns. He pleaded guilty, explaining that he started his $30,000 collection when he was 12 but failed to keep up with registration laws. "Patty Hearst was running around then," he recalls. "They tried to link me to subversive groups. They got me because they wanted someone with a name." The collection, most of which he got back, is now crated in his mother's cellar. "There was a lot going down in Beverly Hills when I was growing up. A lot of kids didn't make it through the drug era," observes Dean, who credits athletics with saving him. Nowadays he won't even smoke grass. "It thuds me out, and tennis means more to me than getting high."

Home is a one-bedroom apartment in Phoenix, where his WTT club, the Racquets, is based. When back in L.A. he shares a Beverly Hills cliff-hanger with Desi Arnaz Jr., who introduced Dean to his lady of the last two years. "I didn't really mean to get involved with Hamill," Dean admits, "because the less distraction the better." Nevertheless, she has visited him on his Players location once for a week, and he waxes smitten. "To be No. 1 you have to have a fanatical attitude. Dorothy will be up and at the rink at 5:30 in the morning." Not exactly his father's son, Dean doesn't drink and practices tennis six fevered hours a day.

Though Bob Evans has signed him to a five-picture deal, Dean insists, "I've got to concentrate on tennis now, films later." But there are times he mulls the not-so-harsh reality: "I'm not thrilled with movies," he says, "but I can make more in a year acting than either Connors or Borg did playing."
Posted by dino martin peters at 7:55 AM

Hey pallie DMP. It's always great to read more about Dino Jr. Thanks for sharing all of this with us.

Hey pallie Keith, does hope that you took the time to read all the great details 'bout our Dino's beloved boypallie Dino Jr....very cool thoughts on the King of Cool's up and comin' swingin' son...