Hey pallies, likes I have been doin' some more googlin' of our Dino and was so thrilled to find two more articles 'bout our Dino's beloved boypallie at People Mag.

This one is 'bout the upcomin' marriage of Dino Jr. to Miss Dorothy Hamill. Lots of cool details 'bout Dino Jr. and his relationship with Miss Dorothy...loves learnin' more 'bout our Dino and Family Martin...especially Dino Jr....the apple of our Dino's eye.

As usual, to read this in it's original form, just clicks on the tagg of this Dinogram. Dinolearnin', DMP 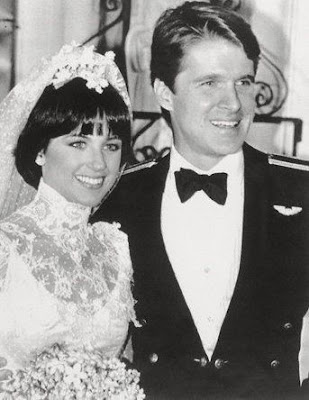 Famous skater Dorothy Hamill, 25, and famous son Dean Paul Martin, 30, have been going together longer than many people in Hollywood stay married—five years. But until now their romance has seemed so quiet it has left gossip columnists grasping for items. He's nice, she's nice. He's handsome, she's pretty. He's pensive and shy, she's giggly and shy. About the worst you can say about them is that Dorothy went through a brief temperamental period in 1976 trying to cope with success after the Winter Olympics in Innsbruck, and Dean has already had more careers than his father has had wives.

This Friday, though, the ice princess from Connecticut and her beau are scheduled to make news in a big way—a grand old-fashioned Hollywood wedding at All Saints Episcopal Church in Beverly Hills. Besides family, the guest list features names like Frank Sinatra, Kenny Rogers, Lucille Ball, Desi Arnaz Sr. and Jr., Milton Berle, Rod and Alana Stewart, Vitas Gerulaitis, Jimmy Connors and Ali MacGraw. About the only famous friends not invited are Ronald and Nancy Reagan, who were Dorothy's former neighbors in Pacific Palisades. "On the one hand, we felt it would be impossible for him to attend," she explains, "and on the other, if he did, it would ruin the whole thing—all that publicity and security."

Dorothy and Dean are, in short, as close as Hollywood can come to a royal couple. After a 10-day honeymoon—"near the ice," Dorothy reports, "somewhere like Sun Valley or Lake Tahoe"—she will be off to the New Jersey Meadowlands with Ice Capades, while he will plunge into talks with ABC execs in L.A. about a possible TV series. "I've made a commitment to concentrate on my career as an entertainer," says Dean. "I want to be home-based now." Their new home is an enviable base: a dazzling two-bedroom wood-and-glass house on a hill in Benedict Canyon. Dean is also committed to one weekend a month with the California Air National Guard, having earned his pilot's wings last year. Both he and Dorothy hope to minimize the chronic schedule conflicts that have plagued their relationship from the start. "I once gave us only a 50-50 chance of making it," Dean says. "But the bottom line is that we've always wanted to be together. And I hope and believe that will stay true for us for a long time."

Their first date was a classic example of what movie scripters call "meeting cute." His best pal, Desi Jr., had read that Hamill, fresh from the '76 Olympics, was in L.A. Knowing that Dean was interested, Desi called her, got a date for dinner and asked if he could bring a friend along. Midway through dinner he went table-hopping, leaving Dorothy and Dean staring into each other's eyes, though not in rapture. "There Dean and I sat, two painfully shy people twiddling our thumbs and not knowing what to say—especially me," Dorothy recalls. "I thought Dean was so handsome and funny and sweet and I said to myself, 'He can have any girl he wants, so I know this won't lead to anything.' " But then a dance together broke the ice, and the next night they dined without Desi.

Dean and Dorothy grew up literally and figuratively a continent apart. She was born in wealthy, conservative Riverside, Conn., where her father, Chalmers, is a Pitney Bowes executive. She has been concentrating on skating since she was 8 years old. She won the U.S. Novice Ladies Championship at 12, and at 15 she and her mother, Carol, moved to Denver to be near her coach. At 19, she soared into the world's hearts with her winning smile and form at the Olympics and immediately turned pro. The pressures that followed were so intense she wound up with a bleeding ulcer. In all those years of training, almost her only nonskating interest was boys. "I was always falling in and out of love," Dorothy says. "I was engaged when I was 16 to the first guy I ever dated, but my father told him I was too young."

In contrast to her single-mindedness, Dean has tried at least six callings. At 13, he, Desi Jr. and Billy Hinsche formed a teenybop group called Dino, Desi and Billy and almost immediately hit the rock music charts. Later, as a student at UCLA, he played on the NCAA championship tennis team with pal Jimmy Connors, then dropped out and eventually turned pro, working his way up to 115 in the circuit rankings. In 1979 he starred in a tennis movie, Players, with Ali MacGraw. Along the way he was a semipro football player and auto racer who dropped into and out of premed and aeronautical engineering programs at USC. His first marriage, at 19, to actress Olivia Hussey ended amicably after four years; their son, Alexander, now 8, lives with Olivia and her second husband. That experience is one reason Dean was in no hurry to try again. "When you go through a failed marriage," he says, "you're wary about getting involved again."

His romance with Dorothy had more rough patches than most people knew. "We had rocky moments not being able to be together," Dean says. "I became an Ice Capades groupie when I was off the tennis circuit. And it was difficult for Dorothy because my tour was in Europe and the Orient for months at a time." She agrees: "I'd get so lonesome, especially in the summer. That was my slack period and he was always off somewhere. I was mad and bored and upset." Her parents, moreover, were wary of him. "You see what he looks like—not too shabby, huh?" says Dorothy. "And he had this reputation as a Hollywood playboy." But Dorothy's parents have long since come around, and Dean Martin Sr. is delighted. "I'm crazy about her," he cracks. "Look how close she is to the ice."

In Dean Jr., caution seems almost a matter of principle. "He thinks too much," says Dorothy. "That's the thing that bothers me most." In fact, he never did pop the question exactly. "It was a quiet evening in his apartment in West Hollywood," she recalls. "He had his wallet and keys and sunglasses and appointment book in his usual neat pile on his dresser and I saw this little black box. He said, 'That's for you,' and I said, 'Little black boxes frighten me.' But he made me open it and there was a ring and then I said, 'I guess I'm getting married, huh?' He's the most unromantic person in the world." (The ring, though, was extravagant—four baguette diamonds in a gold setting.)

Hey pallie DMP. It would have been cool to have been at that wedding.

Hey pallie Keith, yeah, and I loves so much learnin' all 'bout Dino Jr. and Dorothy's amorin'...