Hey pallies, now here is one stellar Dinotrib to our great man. So grateful that cartoonist Pete Emslie put me on to his wonderful Dinotoon and this wonderful celebration of the life and times of our Dino at Pete's amazin' blogg Cartoon Cave (clicks on tagg of this Dinogram to goes there).

Loves not only how Pete has captured that Dinocool with his artistic ability, but also for his lovin' words 'bout our Dino. And I am indebted to pallie Pete for his kind words 'bout this here ilovedinomartin Dinoblog as well..."For the ultimate Dino site, check out Dino Martin Peters' blog."

So hopes all you pallies will takes the time to view this heartwarmin' trib to our great man and enjoys the Dinodifference for Dinosure. Dinodelightedly, DMP 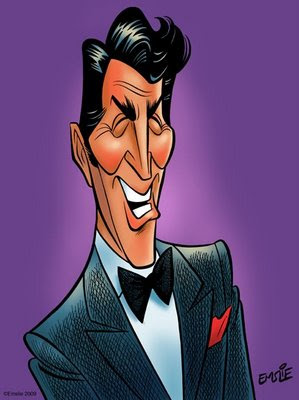 I've written on several occasions of my favourite singer, Frank Sinatra. More recently I did a caricature tribute to Bobby Darin. With today's subject of Dean Martin, I now complete the triumvirate of my favourite male singers. Yes, more often than not, one of these three legends is heard crooning from my stereo, as I still yearn for those wonderful years when the radio airwaves were ruled by Italian American baritones. Actually, I had hoped to write this tribute to Dean for his birthday on June 7th, but I'd been on vacation the week before and had no time to draw the caricature at that time. 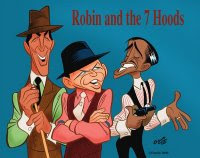 I am of course a huge fan of The Rat Pack, not only for their music, but also for their breezy attitude and brash humour, so refreshing when compared to today's stifling (and in my opinion, unhealthy) "politically correct" sensitivities that seek to find offense in any off-the-cuff remark. As a cartoonist, I have no time for this latter day nonsense, and much prefer the freewheeling style of Frank, Dean and Sammy. The joke of course is that the Las Vegas routines of The Rat Pack were satirically puncturing the absurdity of ethnic intolerance, but did so through allowing Frank and Dean to behave like frat boys, getting in good-natured digs at Sam, who ultimately came off as both the sympathetic character and the most dignified, yet always somehow getting in a jab or two back at them.

It's always struck me as pretty curious how Frank and Dean ended up as best buddies, as they are actually quite different in many ways. Whereas Frank was a political animal and very passionate about causes he believed in, Dean seemed to prefer not to get too involved and often couldn't work up much passion about something one way or the other. For example, it was Frank who was solidly behind getting JFK elected President, staging fundraisers and using personal clout to sway voters (infamously among the teamsters union). In contrast, Dean was merely along for the ride, showing up to perform at fundraisers more as a favour to Frank than due to any personal political motivation. He'd likely rather have spent the time on the golf course instead, or on his couch back home watching a western on TV. 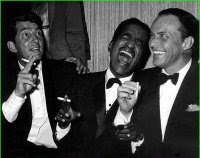 In their Rat Pack concerts in Vegas, Dean was the court jester sent out first to warm up the audience through feigned inebriation, slurred jokes and humourously altered lyrics to some of his songs. When Frank emerged later for his set, it was a much more serious presentation of his song repertoire, with just the occasional glib aside to the crowd. Dean was certainly the more gifted comic of the two, with an easy humour and perfectly timed delivery. Frank often made remarks that seemed forced and weren't really very funny (except maybe to him). It is likely because of this less than comfortable approach that Frank was not as successful as Dean in hosting a TV variety show, having briefly tried and failed at it several years before Dean went on to a highly successful run with his own Dean Martin Variety Show that lasted for years on NBC. Frank was too intense for a weekly show, whereas Dean's easygoing style made him a natural host that viewers looked forward to spending time with.

There was a trade-off however, in that Frank has to be acknowledged as the more passionate of the two when it came to their recording careers. Frank could sing all manner of songs convincingly, whether it was a swinging, breezy number like Witchcraft, or a heartbreaking ode to rejection and loneliness like One For My Baby, or the wistful It Was a Very Good Year. Though Dean was a wonderful singer, his choice of song material always seemed to remain on the light and breezy side, as I really can't recall him singing anything of great emotional depth. He could sing romantic ballads, but never with the yearning that Frank could imbue them with. His forte seemed to be odes to the swinging bachelor life, with a martini and a babe always within easy reach, my favourite being his rendition of Baby, It's Cold Outside. Interestingly, although both Frank and Dean were proud of their Italian heritage, it was only Dean who included a lot of olive oil saturated Italian ballads in his song catalog, with Frank only dabbling in that genre with his 60s hit, Domani. 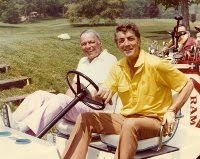 I suspect Frank in many ways not only admired Dean, but was likely a little envious of those traits that he himself lacked. It also seems that Dean was alone among Frank's friends in being able to say no to him, while still remaining in his good favour. Frank counted on his cronies hanging out with him and sharing some laughs at the bar until the wee small hours of the morning. Yet Dean was able to get away with often declining the invitation, instead heading back home to bed for a good night's sleep so he could be out the next morning for an early tee off time on the green. Though Frank was one to infamously hold grudges against those who wouldn't jump through his hoops, Dean seemed to be spared his wrath and perhaps was the only guy whom Frank actually admired for his contrariness. Maybe that's also how Dean's fans respond to him as well - as a guy they admire who always marched to the beat of his own drum, critics be damned. Here's to ya' Dino!

(By the way, I dedicate this post to my ol' buddy in Ottawa, Jack Tremblay, another one of Dino's biggest fans. This one's for you, pallie!)

And finally, here's a clip of Dean at his playful best. Check out the part where he's waiting for his cue to resume after the backup singers are through - just priceless!

Hey pallie DMP. I really love that piece of Dinoart. It's so cool and hip just like our Dino.

Hey pallie Keith, yeah this Pete dude is very Dinocreative...and loves how he loves our Dino...thanks for droppin' in and droppin' some Dinopatter