Hey pallies, ilovedinomartin shares in deep respect of Mr. Ed McMahon on his passin' from this life. As you will see from this Dinopost Mr. McMahon played a very important role in the reunion of our Dino and the jer back in 1976 at the MDA telethon.

Thanks to the Nola web site we have this great piece of Dinojournalism by Mr. Dave Walker. To read this Dinoreport in it's original format, just clicks on the tagg of this here Dinogram.

Mr. Walker interviewed Mr. McMahon 'bout the time of the Katrina Hurricane and as you will note this stellar piece of Dinoprose never got shared 'cause of Katrina. Now on the death of Mr. McMahon, Mr. Walker is sharin' the results of his interview with the world. And the great thin' is this interview shared a great Dinodetail that far as I know has never been shared with the world.

It is so so cool to hear how Mr. McMahon was instrumental in helpin' the frankie get our Dino and the jer back together. Read all 'bout it below. Again ilovedinomartin extends its sympathies to the McMahon family on his passin' and we say our belated thanks to Mr. McMahon for his role in the amazin' moment in Dinohistory when our Dino and the jer came back together. Dinoreportin', DMP 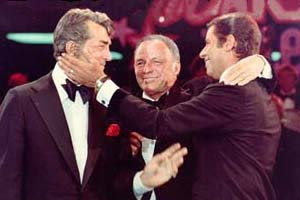 
MDA Jerry Lewis and Ed McMahon cut up on the 'MDA Telethon.' 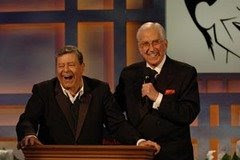 He's best known, of course, as Johnny Carson's "Tonight Show" No. 2, a post he held for three decades.

But McMahon also served an important role for many years on the "Jerry Lewis Labor Day Telethon," hence this blog post.

I interviewed McMahon about his Telethon work in the weeks leading up to the 2005 extravaganza, one of my favorite TV moments of every year.

The story was scheduled to run in the September 4 TV Focus, which was never printed. The much-loved TV insert was a Hurricane Katrina victim, that week and thereafter, so the story never ran.

The final version is long gone, but I was able to dig up my notes from the piece (which I'd apparently loaded onto a laptop in case I needed them during what I'd expected to be a brief evacuation).

McMahon and I talked about his relationship with Lewis and his role on the Telethon, which at that point had raised close to $2 billion toward neuromuscular-disease research.

At the time, Lewis was suffering from pulmonary fibrosis and the bloating side-effects of his treatment for that ailment.

But Lewis was on the mend, McMahon said, and was anticipating a return to form on the Telethon. (Lewis urged viewers to donate to hurricane relief organizations on that year's Telethon, which played out against nonstop cable-news coverage of the levee-failure catastrophe.)

McMahon's role on the Telethon was to bolster Lewis through the all-night-and-most-of-the-next-day broadcast, work that intensified during Lewis's illness.

"He had to take it easy," McMahon said. "He couldn't do as much as he could normally do. I had to fill in for him. But he's a trouper. A lot of people would've stayed in bed, but not him."

McMahon's long-running Telethon duty began by accident, he said, when he subbed for Lewis on camera for a few minutes one year.

"The next thing I know, he's offstage," McMahon said. "He's got his arms folded as if to say, 'Keep going, pal. You're doing good.' When he came back on stage, we did some more stuff. Later, he said, 'We should do this every year.'

"That's how it all started."

McMahon said he knew that he sometimes served as a calming influence on Lewis, who was and is prone to bursts of off-script and sometimes off-color humor on the exhausting show.

"He gets outrageous, but that's his style," McMahon said. "People expect that. They're not surprised by that.

"He told me years ago, 'Ed, if I walk out too far on a limb, bring me back.' I do that. I'll say, 'What a minute! Excuse me! We don't have time! Sorry, we've got to go to something else!' He expects that from me. He wants that to be my role.

"He's given me carte blanche to interrupt him at any time."

"That Dean Martin surprise," said McMahon. "I was having dinner with Sinatra ..."

According to my notes, I'd intended to then write this aside in the original column:

"Speaking of interruptions, here's one. Aside from his service as a U.S. Marine and as Carson's No. 2 for all those years, any American who can start an anecdote with the words 'I was having dinner with Sinatra' is a great American."

It could. McMahon hid Martin in his trailer until it was time to go on. Martin and Lewis had been estranged for most of their adult lives. Martin walked on stage and Lewis said, "Uh, so, you working?"

"What an opening line," McMahon said. "They were brilliant, and it did bring them back together."

McMahon was brilliant with Carson, who'd died earlier that year. (A tribute to McMahon is streaming on the Johnny Carson website.)

McMahon was as close as anybody could be to his boss, which is to say not all that much. McMahon said Carson enjoyed his sidekick's work on the Telethon.

"He got a kick out of it," he said. "I used to finish the Telethon at 3 p.m. then go do 'The Tonight Show.' Johnny would say, 'So, what did you do today?' He did the Telethon a couple of times. Once he came on, looked at me and said, 'So this is where you've been.'

McMahon speculated about a possible tribute to Carson on that year's Telethon, a chance to replay some of his appearances at the event.

If it happened - I was busy with other stuff on TV that weekend -- it would've been one of many tributes to Carson that year.

McMahon was interviewed dozens of times in the weeks after Carson's death, and later got a call from Carson's wife thanking him for his kind words.

"And I got a laugh out of her during that sad time," McMahon said. "I said, 'And you know what? He would've hated every minute of it. He would've said, 'Cut the crap, Ed.'

Hey pallie DMP. Thanks for sharing that. I didn't realize how much of a part Ed played in that monumental event. That's cool to know. I was sad to hear of Ed's passing. He was an amazing personality. He will be sorely missed.

Hey pallie Keith, you are certainly Dinowelcome as Dinoalways...loves to learn each and every Dinodetail that I cans...and of course to pass 'em on to other Dinoholics such as yourself...

This is so sad : ( If i am not mistaken, Ed is the last one who knew Rat Pack personally? Or at least he is the last great entertainer! I just hope that my generation will be able too see talent like that some day.. But i doubt thet, people like that are born with this talent and are very few : (

Hey pallie Maria, I does think there are many left who knew our Dino, but that number decreases daily....yes, today's generation needs to turn to the best....our Dino...certainly there will never be anyone like him to ever come our way again....