Hey pallies, more Dinoproclamation from the Cleveland Plain Dealer...the newpaper that features Dinolovin' John Petkovic's column "After Dark." Read this cool trib to our Dino and keeps celebratin' our Dino's entrance into the world....The Day That Coolness Came To Earth...to reads this in it's original Dinoformat, just clicks on the tagg of this Dinogram. Dinodiggin', DMP

Raise a glass - no, make that a wet bar, a liquor cabinet and a jar of olives - in honor of Dean Martin. Thursday, June 7, would be the 92nd birthday of the patron saint of John Petkovic's After Dark column. (OK, so it's four days later than the actual birthday, but it IS still Thursday.)

The legendary Dean Martin would be 92 years old. 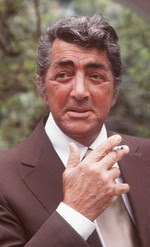 The Steubenville native, born Dino Crocetti, tore it up when he moved to Cleveland in 1940. Formerly a two-bit blackjack dealer, he took the name Dino Martini and landed his first steady gig crooning for $35 a week at the Vogue Room of the now-closed Hollenden Hotel on East Sixth Street. Then came Hollywood, the Rat Pack and Vegas.

The legacy of the top-shelf entertainer, who died in 1995, is a mixed drink that's as smooth as it is fermented. So party with him, in spirit. Remember, he's the guy - or one of the guys - who reputedly said: "I feel sorry for people who don't drink because when they wake up in the morning, that's as good as they're gonna feel all day." Dino, legend has it, was fond of the Gibson variation of the classic martini. Here's how to make one at home:

If you prefer to salute Dino at one of the Cleveland area's many happy hours, check out Petkovic's recommendations at cleveland.com/goingout and cleveland.com/afterdark
Posted by dino martin peters at 8:26 AM

Hey pallie DMP. I'd have to make me one of those. Cheers!

Hey pallie Keith, and likes when you do be sure to do so in honor of our Dino.....