Hey pallies, likes I am in total awe of the many and varied ways that our Dino continues to be lifted up on the web each and every Dinoday. Today, our Dino directed me to this cool blogg tagged CasinoMan (clicks on tagg to go there) where this dude has posted this totally Dinoinspired Dinobio of our great man.

So much to commend in this Dinotrib, but one of my favs is this..."Martin’s story is the true American dream." No one ever has or ever will lives out the American dream likes our Dino....he is such an inspiration to all of us who seek to dreams as our Dino dreams...

Thanks CasinoMan for sharin' the Dinostory with us and bringin' more and more pallies to know, love, and honor our Dino... Dinodelightedly, DMP 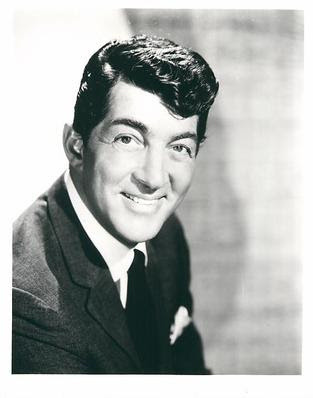 Dean Martin, the man simply known as “Dino,” was a worldwide success. Martin starred in movies, sang Swing Era classics and also introduced America to Italian classics with a new-age twist, and even hosted a hugely popular variety show, The Dean Martin Show.

These are just a few things that Dino did in his entertainment life. He was “second in command” behind Frank Sinatra during the affluent years of the Rat Pack. Martin’s story is the true American dream.

“Dino,” contrary to popular belief, isn’t a nickname. Born to Italian immigrants in Steubenville, Ohio on June 17, 1917, Dean Martin was born Dino Paul Crocetti. Steubenville is directly on the Ohio-West Virginia line – not a lot of Italian immigrants had made the trek that far south from New York and New Jersey.

Dino stood out in this environment, only speaking Italian for a lot of his childhood, and quit school at the age of 16 to work in a steel mill. Dino ran liquor for bootleggers and worked as a croupier for the local speakeasy before deciding to follow in his idols’ – Bing Crosby’s – footsteps.

With so many acts singing the same songs at the time, Dino would experience a slight twist of irony: Not wanting to stand out, everyone noticed him – but needing to stand out, he blended right in.

It wasn’t until 1946 – with acts like Sinatra already famous – that Dean picked up a head of steam with his song “Which Way Did My Heart Go?” Dean’s star started to rise after, and he met acts such as Jerry Lewis and went on to record a few hit songs and star in Hollywood movies like My Friend Irma.

Throughout the ‘50s, Dino starred in many big budget (for the times) movies, including At War with the Army, Jumping Jacks, and Artists and Models, to name a few. The Martin and Lewis machine had taken over the silver screen for 7 years.

After the duo split in 1956, many questioned whether or not Dino’s act – both singing and movies – could recover. Martin silenced critics by starring with Marlon Brando in The Young Lions and starting his own variety show in 1958. Dino also introduced his phenomenally successful hit, Volare, that same year.

In the early 1960s, Dean’s fame was undeniable; but for someone who was known the world over, he was rarely seen out like so many stars of the day. At this point in Dean’s life, he simply wanted to be an entertainer, but didn’t want the ensuing noticeable fame.

He would join forces with Joey Bishop, Sammy Davis, Jr., Peter Lawford and Frank Sinatra to form The Rat Pack. Martin’s fame had grown so much in fact, he even overtook the Beatles’ #1 spot on the charts with his song “Everybody Loves Somebody.”

Martin continued to experience enormous success throughout the ‘60s and the early part of the ‘70s. His health then started to deteriorate in the mid ‘70s, and after his son, Dean Paul, died in a plane crash in 1987, Dino became reclusive. No one saw or heard much from Martin for the remainder of his life. Martin died on Christmas Day in 1995.

Posted by dino martin peters at 7:35 AM

Hey pallie DMP. That is so awesome. People always speak of wanting to live the American Dream. Dino shows up the perfect example of how to do that. Great post. Cheers!

Hey pallie Keith, exactly, our King of Cool shows us the way to dream the American Dream and likes how to makes it happen....no one more happenin' then our Dino...

And once again, American Dream can be tough! I loved the hole post about Dean's life, but i get so sad every time i read about what happened to him after Dean Paul died.. So unfair : (

Hey pallie Maria, yes, it is very sad the way that our Dino's heart was broken by his boypallie Dino Jr. crashin'......and yes, although our Dino did the American Dream better then anyone ever has or ever will, yes, great saddness came into our great man....

This is one of the best bio sketches I've seen on our Dino.

Hey pallie AOW, thanks for droppin' some Dinopatter....and yeah I really digg the Dinodepth of this Dinobiographical sketch....