a rigorous, admiring of the way Dean Martin unconsciously — or maybe consciously — deconstructed the medium of television every week o

Hey pallies, likes you all knows how much I loves to read 'bout other famous people who loves our Dino...well I found this New York Times Article tagged....."A Round Peg" by Randy Kennedy (clicks on tagg of this Dinogram to go there)...that shares artist/ writer Dan Graham's passion for our Dino....woulda loves to read the Dinoarticle that he wrote for Fusion Mag or the book "Rock My Religion" that also includes that Dinoessay.

Alas, I was not able to find the article (yet) and the book is long outta print....but you can trust that this Dinoholic wiil keeps on tryin' to find this Dinoprose. Below is the portion of the article that mentions Mr. Graham's facination with our Dino's amazin' persona.

Loves how Graham puts our Dino "in the unlikely company of Brecht and Godard." Likes how very cool to have our Dino compared to other existentialists Likes how wonderful to find such insight into our Dino's persons....likes our great man is always so detached from the world. Dinoadmirin', DMP 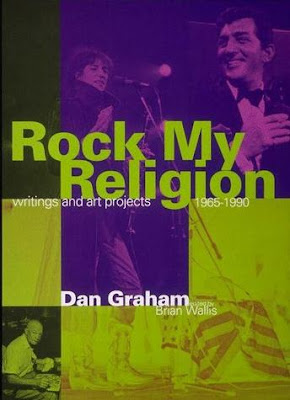 He wanted to be a writer, and when this passion united with another for rock music, he began a sporadic career as an odd sort of critic. One of his often-cited pieces, published in the rock magazine Fusion in 1969, wasn’t about music at all; it was a rigorous, admiring deconstruction of the way Dean Martin unconsciously — or maybe consciously — deconstructed the medium of television every week on his variety show through the creation of his shambling, supposedly bourbon-saturated persona.

“The audience is never ‘taken in’ by the myth of Deano’s ‘personality,’ ” Mr. Graham wrote, putting Martin in the unlikely company of Brecht and Godard. “Instead, it is made aware that this is an artifice — the sustaining scaffold necessary to support the premise of the show.”
Posted by dino martin peters at 5:53 PM

Hey pallie DMP. I'll admit that I don't know much about philosophy, but this was cool to read.

Hey pallie Keith, know wha you mean...but after readin' 'bout this way of understandin' our Dino wantta learn all I can 'bout disengagement....

Wow, this was great to read!

Hey pallie Maria, glads you like it...this is the sorta Dinostuff that I really likes to share with pallies like you...loves learnin' more 'bout others thought on our Dino's complex personality...