The Tao of Dean Martin?

Hey pallies, likes here's a dude tagged Waldo at his blog "To Exist Is To Change," who havin' read some of Deepak Chopra's book, has come to the Dinoconclusion that Chopra is simply esposin' our Dino's philosophy of life...but then our Dino was always ahead of his time. When I left some Dinopatter for this dude, I told him how Nick Tosches' once described our Dino as "an American Buddha."

Certainly there is no better philosophy of livin' then our Dino's and cool to see this dude recognizin' it by readin' Chopra's tome. To read this in it's original format, just clicks on the tagg of this Dinogram. In true Dinophilosophy, DMP 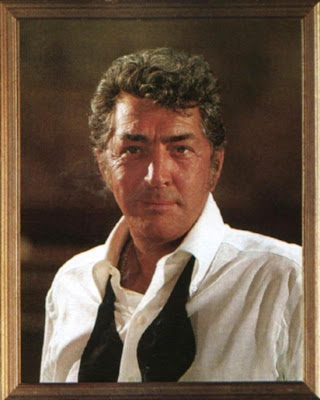 Saturday, June 13, 2009
The Tao of Dean Martin?
I used to try to live by a motto that went something like: "When faced when an important decision, imagine the two people you most respect in the world are in the room with you, and act accordingly." Now, I've certainly made some choices in my life - some rash, and some considered - that violated that ethic. But I've also made some choices and grown in some great ways when I ignored that idea as well. So which is the better guide: One's inner voice, or a set of ideals based on the behavior of those you admire?

Deepak Chopra,* in his book "The Seven Spiritual Laws of Success," advocates the following:

"Remain in the state of self-referral. This means remain established in the awareness of your true Self - your spirit, your connection to the field of pure potentiality. It also means not to look at yourself through the eyes of the world, or allow yourself to be influenced by the opinions and criticisms of others."

Taken literally, that is a bold approach to life. Is he suggesting that we should ignore the counsel of those who we admire? Should we hold to our own individual sense of wisdom or morality, even if it alienates those closest to us or isolates us from the community? Or is Chopra suggesting this on a micro, rather than macro scale? Should I refer only to my inner self when making mundane choices like selecting a new dry cleaner or choosing to wear flip-flops to a funeral, but heed the wisdom of the surrounding culture in larger issues, even if it impinges upon my sense of pure potentiality? I would hope that he is not advocating such hypocisy, yet in a dozen ways per day, we each make private choices that we might not if they were to be examined under the glare of public review.

Which brings me back to my original guidelines of making choices as if those you admired were critiquing your actions. Could that possibly be a valid approach? Assuming those two people whom I admire most aren't in the room when I make a decision, then I could only suppose what they might think or do if they were in my shoes. And those suppositions would be based on their relatively public persona: Since we usually don't usually have insight into the dozens of private choices that others make each day, can we really know with absolute certainty which way their moral compasses point?

And that leads the question of consequences. Chopra goes on the suggest that after embracing self-referral, we should "relinquish attachment to the outcome" and appreciate "the wisdom of uncertainty." He also suggests that we "let the universe handle the details." I don't think he means that we shouldn't care about the consequences of our actions, nor could he possibly mean that when faced with a choice, we should imagine everyone in the universe is in the room with us. I think that he's just trying to say to make your choices, stick by them, and let the chips fall where they may. If that sounds more like the wisdom of the Rat Pack than of Eastern philosophy, then so be it. If so, then it just goes to show how underrated Dean Martin really was.

* I've read exactly 78 pages of Chopra to date, and I still can't decide if there's any respectably original thought in his book, or if it's just fortune cookie wisdom. I'm leaning toward the latter.
Posted by WaldoOC at 1:32 PM
Posted by dino martin peters at 7:46 AM

Hey pallie DMP. We had already discussed before how Dino and Buddha are alike. It's interesting to see another Eastern philosophy and our Dino compared. There is no other way to truly live one's life to the fullest that the way of Dino. Cheers!

Sorry that I missed out on Dino's birthday last week, but here's something that I think you'll enjoy!

Hey pallie Keith, yeah I so dug readin' how this dude compared our Dino to Tao....Dinophilosophy rules...

Hey pallie Pete, thanks for the Dinopatter...and that Dinotoon is outta this world..and likes thanks so much for the Dinomention....hopes it's ok to feature your Dinoart here at ilovedinomartin....you'll be seein' it likes real Dinosoon...