Hey pallies, Dinofest '09 is fast approachin' in Dinomecca....so how Dinoprovidential to find this cool Dinotrib to our Dino and his city of birth.

Thanks to pallies Gunnar and Sherry at the unique blogg Eccentric Roadside for sharin' their love of our Dino and some stellar pixs of Steubenville for all us pallies to take great Dinopleasure in. So so wonderful to find the name of our Dino bein' lifted up is so many Dinodifferent Dinoways....showin' the passion that people all over the planet have for our Dino, his life, his times, his legacy of cool.

So enjoys travelin' to Dinomecca through the eyes of Gunnar and Sherry. To sees all this in it's original Dinoformat, just clicks on the tagg of this Dinogram. Dinosharin', DMP 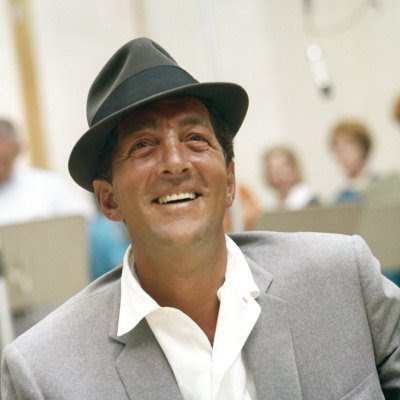 The one and only Dino, Steubenville's favorite son 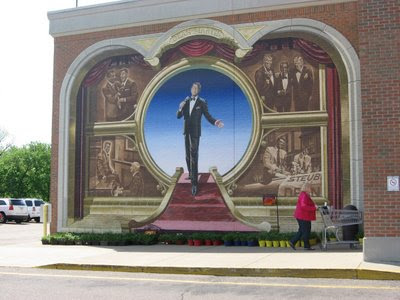 The one and only Dino mural 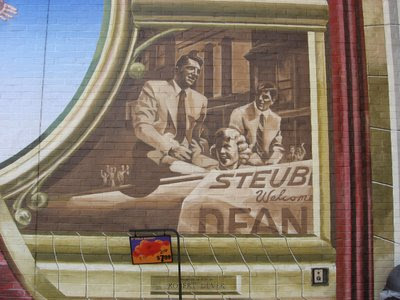 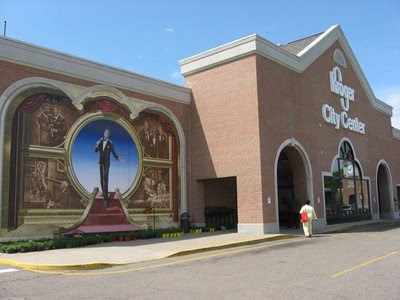 Conveniently located next to Kroger's Supermarket 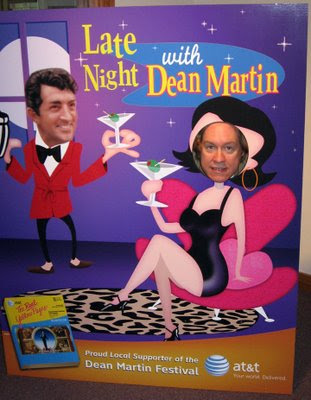 There's Dino fun to be had at the Steubenville Visitors Center 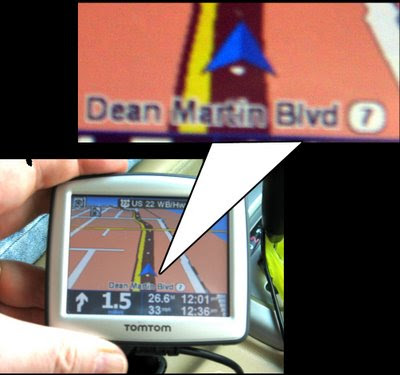 You're nobody til Tom Tom loves you 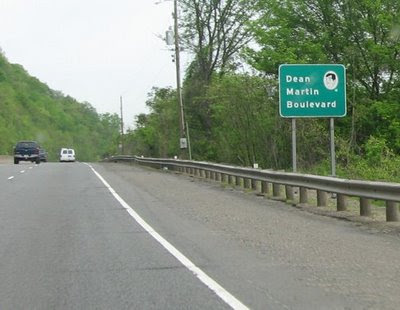 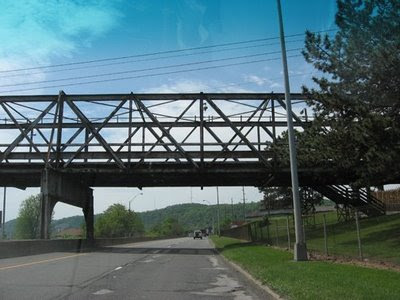 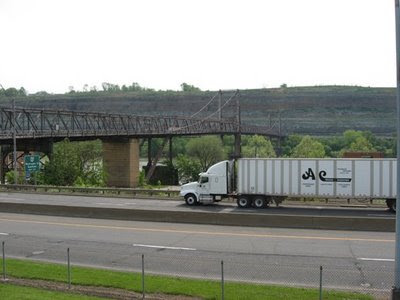 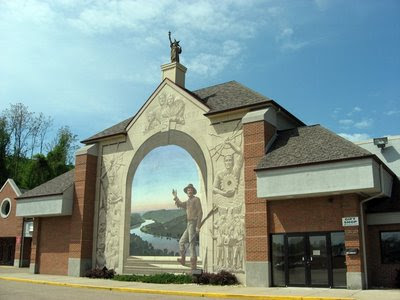 Steubenville has some first-class murals 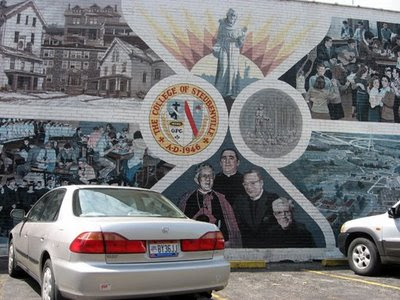 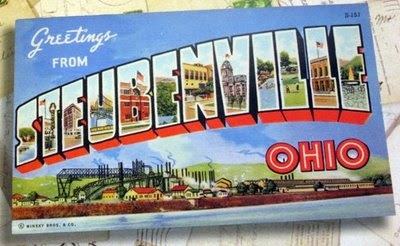 Nobody was a cooler entertainer than Dean Martin. For decades he was everyone's favorite breezy, tux-wearing, skirt-chasing, pseudo-drunk crooner. He was the guy with the "who cares?" attitude that Frank Sinatra always tried to be like but was too intense a person to pull off. You would have expected him to have been from a swingin' cosmopolitan place like New York or Chicago, but he was born and raised in the unlikely industrial rustbelt town of Steubenville in eastern-most Ohio, not too far from Pittsburgh on the Ohio river. Wikipedia says "During its heyday in the period of the 1940s-60s, Steubenville was popularly known as "Little Chicago," a nickname that, on the one hand, evoked the city's prolific industry and downtown bustle, while on the other hand suggesting Steubenville's reputation for crime, gambling, and corruption." The town today is a hardscrabble yet earnest place, trying to beautify and better itself despite some hard times (and what smells like the fumes from a chemical processing plant in the air). It has Fort Steuben, a strategic camp from the post-Revolutionary era. It also has 25 beautiful murals painted on the outside of downtown buildings. Really nice ones. But Dino is still the main attraction here. His mural is the nicest and it's next to the Kroger's Supermarket, where everybody can see it. And they've renamed a stretch of Rt. 7, the main drag, Dean Martin Boulevard. It doesn't pass by glamorous casinos and nightclubs, though...just smoky power plants and rusty steel bridges, but, hey, they did the best they could. And if you're in the area this Thursday through Sunday (June 18-21), they're having their yearly Dean Martin Festival, which should be a gasser, pallie, a real gasser. Everybody loves somebody sometime.
Posted by Gunnar and Sherry at 2:04 PM
Labels: Dean Martin, Ohio, Stuebenville Ohio
Posted by dino martin peters at 8:20 AM

Hey pallie DMP. Man, this is such a cool post. I love those pix. I'd really dig heading to Steubenville on a Dinopilgrimage at some point in my life.

Excellent pictures of the town I work and live in! Nice to see it looking so good! Thanks!

Hey pallie Keith, glads you loves this....I was so Dinopsyched to find this blogger payin' homage to our Dino and his city...'specially so close to Dinofest '09....

Hey pallie Lemmy, how nice of you to dropp by the Dinoblog and dropps some patter...how cool to have someone who actually lives in Dinomecca comes over to ilovedinomartin...so Dinodesirious of makin' a Dinopilgrimage to our great man's town...might I suggest that you clicks on the tagg of this Dinopost to tell the pallies who put these Dinopixs together you appreciato for their Dinoefforts....

Hey Pallies, all's I can say is Wow-wee-wow-wow! You cats are coolsville. Have a ring-a-ding time at the Dino clambake!

Hey pallies Gunnar and Sherry, thanks for droppin' by and for the great pixs of Dinomecca....and honorin' our Dino in this way...

Oh, i just love how much they adore Dean in his hometown. : )

Hey palie Maria, gotta agree with you totally....so so stellar to see the way pallies in Dinomecca shows their Dinopassion for their hometown boy....and oh, how I wish I coulda gotten to Steubenville for Dinofest 2009...glads to hear from our Dinogirl...how's the healin' goin'?

Thanks, pretty good : ) In a couple of days everything is over ;)

I've looked at all your latest posts, and all i can say is WOW, Dean would really be proud of you ^^)

Hey pallie Maria, glads to hear your good news.....and likes thanks so much for the compliment....wants nothin' more to lift of the name of our Dino....and makin' our Dino proud woulda gives me the greatest of Dinopleasure....so are you still on track to come over to the states this summer?

Yeah, 28th next month i am on the plain to LA : )
And while i was at home with to broken arms :P i now am proud owner of hole Comedy Hour and lots of Dino dvd's :D And a lot of Dino Cd's.

Hey pallie Maria, and I am likes certain that you have drawn on Dinostrength to get you through this tough time....if you had to go through this problemo, so so happy that you could draw closer to our great man durin' your healin' process....does hope you will be able to keep in close Dinocontant with ilovedinomartin....loves to have your Dinothoughts and your Dinosupport in liftin'up the name of Dino!!!!