Hey pallies, a dude tagged Desdinova at the blogg Super Villian Of The Ozarks has honored the memory of Miss Farrah Fawcett by remindin' all of us of that cool clip from "The Cannonball Run" where our Dino and the Sam play priests and our Dino wants to "bless" the patient Miss Farrah." This happens to be the same Dinoclip shared recently in honorin' the memory of Mr. Dom DeLuise.

To read the trib to Miss Farrah in the original, likes just clicks on the tagg of this Dinogram. And enjoys the classic Dinoclip rememberin' our Dino and Miss Farrah. Dino-only, DMP

Thursday, June 25, 2009
FARAH FAWCETT DIES AFTER A BATTLE WITH CANCER 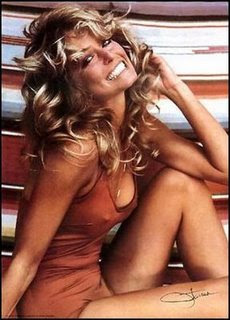 My one weakness is blond women. From my junior high crush on a girl named Eunice Moneymaker to my obsession with Paris Hilton, I love well-dressed, blond girls with a lot of long hair. It probably started with Farah Fawcett. She died today at 62 after a brave battle with cancer. Here is the CNN obit.

One of my favorite moments involving Farah is from Cannonball Run. She plays a reporter/environmental activist ("I just LOVE trees!") investigating the cross-country Cannonball Race. She winds up in the ambulance driven by Burt Reynolds and Dom Deluise. She puts up a fuss so they have their doctor, played by Jack Elam, to give her laughing gas to calm her down. They wind up stopped by a car driven Dean Martin and Sammy Davis Junior, who are disguised as priest. Dean Martin realizes that Burt Reynolds is using the ambulance as a disguise as well. Reynolds tells him they have to get their "patient" to a hospital. Martin insist on looking in the back of the ambulance saying he has to "bless the patient." Reynolds opens the door where Farah lays zonked out and giggling on laughing gas. Dean Martin exclaims "OH, I'VE GOT TO BLESS HER!"

Hey pallie DMP. Thanks for posting this. I was really sad to hear of the passing of Farrah.

Hey pallie Keith, yeah, the scene between Miss Farrah and our Dino is way short...but our Dino makes it way cool...does wonder if our Dino and Miss Farrah ever did any amorin'...