Hey pallies, in lovin' trib to our Dino and Miss Farrah Fawcett, if you clicks on the tagg of this Dinogram you will be able watch the first of two parts of "Angels In Vegas"....the third season opener of "Charle's Angels" that featured our Dino and the Angels that include Miss Farrah.

The pallies who put this up at youtube will not allow this Dinoshow to be embedded on a blogg likes this here ilovedinomartin, so am doin' the next best thin'...aharin' the Dinolink with ya. Stay tuned for the second half of this stellar Dinodrama. Dinodevotedly, DMP 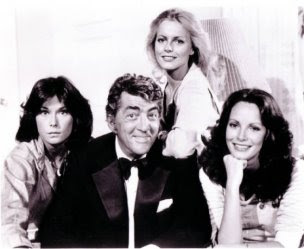 Dean Martin stars as Frank Howell, a struggling casino boss whose closest friends are suffering violent deaths. The Angels travel to Las Vegas and go undercover at the Tropicana to help.
Posted by dino martin peters at 7:13 AM

Hey pallie DMP. I always enjoyed watching this. It's nice to remember the connection between our Dino and Farrah.

Hey pallie Keith, yeah some Dinotime ago our Dino lead me into a used vid store and was so so Dinopleased to find a great used copy of season 3 of CA's to be able to have this Dinodoublefeature for my very Dino-own....