June 20, 1948: On This Day In Dinohistory.....Dino and the jer entertain on Ed Sullivan's Toast Of The Town TV Programme

Hey pallies, likes sorry to be a couple of Dinodays late in gettin' this Dinoposted, but wanted let let you all know 'bout this stellar day in Dinohistory...on June 20, 1948 our Dino and the jer were on the premier of Ed Sullivan's "Toast of the Town" that later became the Ed Sullivan show.

Not only was this the premier of that show, but it was our Dino and the jer's first ever televison gig...now how cool is that!!!! To read about this at the original postin', just clicks on the tagg of this Dinogram. Dinolearnin', DMP 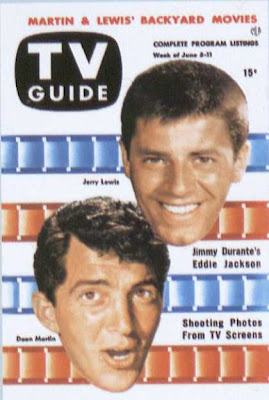 1948 - Toast of the Town premiered on CBS-TV. New York entertainment columnist and critic Ed Sullivan was the host. It started his TV career that would span 23 years on a weekly basis. Dean Martin and Jerry Lewis made their television debut on the show. Also on the guest list: Rodgers & Hammerstein and pianist Eugene List. The first show of Toast of the Town cost $1375 to produce, including just $375 for the talent.
Posted by dino martin peters at 5:17 PM

Hey pallie DMP. Cool to know this Dinodate. I really dig that cover.

Hey pallie Keith, yeah, the cover is way Dinocool...and this Dinodate is of the utmost Dinoimportance 'cause not only did Dino and the kid gets to be on the premier of Eddie's "Toast of the Town"...but likes it was the boys first appearance on the tube....so gotta for Dinosure memorize this one 'cause it is truly Dinohuge in the Dinotimeline of Dinohistory...