MEMORIES ARE MADE OF DINO

Hey pallies, our Dino's 92 birthday is comin' in just a few and loves to again see Cleveland Plain Dealer Reporter John Petkovic lift up the name of our Dino and spread the message of a cool Dinotribute at a pad tagged Sneakee Pete's in honor of our great man b-day.

Loves how Mr. Petkovic has tagged our Dino as " the patron saint of partying" as well as "the patron saint of this column." Certainly our pallie Johnnie "gets Martin" and is doin' his Dinopart to spread the Dinomessage of cool as Dinofar and Dinowide as he can.

To read this in it's original format at Cleveland.com, just clicks on the tagg of this Dinogram. How wonderful to see the Dinolegacy continuin' to Dinogrow and Dinoglow!!!! Dinodiggin', DMP

MEMORIES ARE MADE OF DINO: Raise a glass or six in honor of the patron saint of partying. Sunday, June 7, is Dean Martin's 92nd birthday. 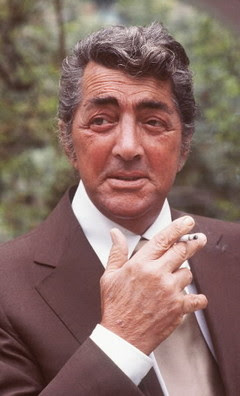 (If you find someone who doesn't, spill a drink on 'em.)

Raise a glass -- no, make that a wet bar, a liquor cabinet and a jar of olives -- in honor of Dean Martin. Sunday, June 7, is the 92nd birthday of the patron saint of this column.

The Steubenville native, born Dino Crocetti, tore it up when he moved to Cleveland in 1940. Formerly a two-bit blackjack dealer, he took the name Dino Martini and landed his first steady gig crooning for $35 a week at the Vogue Room of the now-closed Hollenden Hotel on East Sixth Street.

Then came Hollywood, the Rat Pack and Vegas. They all came with a ton of hangovers.

But memories are made of more than this.

The legacy of the top-shelf entertainer, who died in 1995, is a mixed drink that's as smooth as it is fermented. Yes, he epitomized snazzy shtick and mastered the tipsy stumble, but he also had the kind of croon that made them sing along with martinis in the air.

I bet Dino is still partying up there in that Great Big Martini Lounge in the Sky. So party with him, in spirit.

On Saturday, June 6, Rick and Sharona will perform a full-blown big-band show that reprises the Live at the Sands gigs that made Dino and the Rat Pack famous.

Hey pallie DMP. I hate to admit this, but I had almost forgot that Dino's birthday was coming up. Thanks for reminding me. Cheers!

Hey pallie Keith, no disrespect meant, but likes I have been worried 'bout your relationship with our Dino...seems you need to spend more time keepin' the focus on our great man...

Hey pallie DMP. You've always worried about that. This is the way I am. I'm sorry if you don't approve though. No disrespect taken.

Hey pallie Keith, each of us needs to lives our lives in their own way....hopes you have a wonderful weekend...and does hope you will find some way to honor our Dino on the Day That Coolness Came To Earth...