Hey pallies, it's been all over the web the past few days, so likes I'm sure that all you Dino-holics knews this Dino-news by now, but thought I oughta at least make Dino-mention of it here. A reporter tagged Ranjan Das Gupta of "The Hindu," the web pad of India's national newspaper was interviewin' film director Martin Scorsese 'bout the release of his most recent flick, "Shutter Island," when the interview turned towards Scorsese's plans to film a bio of Frank Sinatra. As you will note below, this great director's choice for our Dino is Robert DeNiro. Just wonderin' what all you pallies think of this Dino-choice. Below is the paragraph that speaks directly 'bout Scorsese's thought. To read the whole interview, just clicks on the tagg of this Dino-gram to goes to "The Hindu" pad. Dino-reportin', DMP 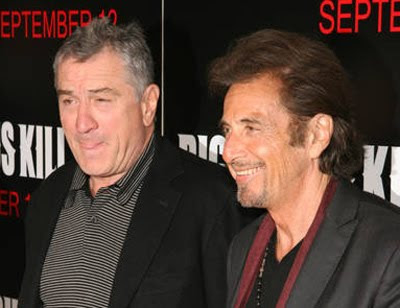 The conversation veers towards his plans to do a film on the life of Frank Sinatra. “I've had it in mind for a long time. Even the initial script is ready. I'm yet to spot the actor who can bring back Frank Sinatra alive on screen. My choice is Al Pacino, and Robert De Niro as Dean Martin.”
Posted by dino martin peters at 7:11 AM

Great actors both, but Pacino and De Niro are terrible choices to play Frank and Dino. I thought Scorcese had already picked Leo Decaprio to portray Frank, which would be another awful choice. If this biopic is definitely going to happen, I'd far prefer that actors who are unknowns would be cast, but I realize that's not how Hollywood thinks these days. Judging by these two names, it sounds like Scorcese wants to do a film about the older incarnations of our guys. If this is so, I'd like to suggest Ed Harris as Frank, as he's got a similar facial structure, those striking baby blues, and even has that element of "danger" lurking just below the surface. As for our Dino, I'd have no idea who to cast!

Hey pallie, thanks Pete for takin' time to stop by and share your thoughts...btw, I woulda agree with your observations....I like your thoughts on Ed Harris...and likes you say, there is truly no one who coulda capture that Dino-magic of our King of Cool....

Oh! My! God! im not sure if i luv the idea or not?? De Niro's defiently the best actor ever but i dont see anybody can portray Dean and Frank well enough especially not Pacino, hes awesome but...no. now i wanna watch 'Rat Pack' really bad Liotta seems like he could play Frank but still the guy who played Dean isnt that great of an actor..idk what to think of this

Hey pallie, thanks Dino-girl for chimin' in on this....'ppreciate your thoughts....no one ever will be able to truly play our Dino...and anyway, I obviously woulda totally totally wanna see the Dino-bio based on Tosches' tome before anythin' for the frankie...

Man, you ain't slingin' no jive when you say there just ain't anyone alive who can pull off Dino, or Frank. But here's an idea...and they'd have to do it 100% perfect...how about using actors who are good enough to act like, sound like and do the same mannerisms as the rat packers, then CGI in the faces to look right. Like I said, it would have to be perfect, but I think technology has gotten to the point where Hollywood could pull it off with enough dough. Hell, they could even have Marilyn in the flick!

Hi, pallie. I think they're both little bit old to play those characters.

...De Niro... Great actor, sure, although I would had preferred Kevin Spacey for our Dino. Of course, we all know that The King of Cool is inimitable! ;-)

In that HBO movie, "The Rat Pack", I must admit I wasn't crazy about either Ray Liotta or Joe Mantegna as Frank and Dean, though I thought Don Cheadle was quite good as Sammy. Mantegna was able to capture the jaded offstage side of Dean, but totally missed the boat at showing his breezy and likable persona. Neither was I too impressed with Jeremy Northam's rather dismal portrayal of Dean in "Martin and Lewis" on NBC a few years back either. If I were looking to cast someone to play Dino, I'd rather audition some of the performers who have portrayed him onstage in the various tribute shows, as I'm certain there must be a worthy candidate out there somewhere.

Hey pallie, well Mr. Pete, I likes that Dino-thought very much...knows if you can only get such a notion through the powers that be....

Pete: i dont think Jeremy Northam did his homework on Dean for that movie he had the look-kinda- but he did that terrible voice and over did the cool to the point where he seemed slow :/..it was horrible anyway aside from Sean Hayes who played a pretty spot on Jerry there were so many mistakes throughout that movie..thats a good idea to cast inpersonators, DeNiro and Pacino are too old for the roles anyway..

Hey pallie, wells Miss Catie, for someone so young in Dino, you certainly tries to be in the Dino-know...how cool is that!