Hey pallies, here's 'nother stellar Dino-honorin' post. From the pages of Memphis Magazine and a feature tagged Point/Counterpoint comes Mr. Tim Sampson's prose on what makes our Dino oh-so-much greater then the frankie. Sampson's thoughts are simply thrillin' to read....simply more great thoughts on what makes our beloved Dino the greatest of the great.

So once again, ilovedinomartin brings you more Dino-devotion for 'nother Dino-phile who truly "gets Martin." Thanks to Memphis mag and Mr. Tim Sampson for liftin' up the name of our Dino and helpin' other to gets likes whys truly our Dino is all that matters.... To view this in it's original format, likes just click on the tagg of this Dino-gram. Dino-only-focused, DMP 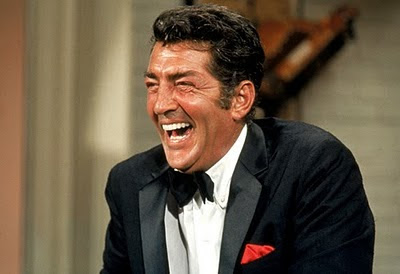 From a fan's distance, it may look like Frank Sinatra and Dean Martin lived almost parallel lives.

Both were accomplished singers and actors and both were members of the famed Hollywood Rat Pack. Both were huge in Vegas, both had multiple marriages, and both were reported to have ties to organized crime. They were also very good friends who fought for civil rights by refusing to perform in clubs and casinos that wouldn't allow their good friend Sammy Davis Jr. the same courtesies. Both were sons of Italian immigrants. Both were good guys.

But while Sinatra was busy playing politics in the early 1970s and supporting soon-to-be-ousted President Richard Nixon and helping pay the corruption-scandal legal bills of resigned Vice President Spiro Agnew — along with announcing his retirement from show business — Martin was in the middle of his nine-season variety hour, the super-popular Dean Martin Show, which lasted 245 episodes and cemented his image as one of the funniest, most charming men in show business. Who today doesn't remember his signature song, "Everybody Loves Somebody Sometime"?

Plus, he was much more handsome than Sinatra and knew how to fall through and destroy a fake piano with a cigarette in one hand and cocktail in the other, without spilling a drop, even if it was really just apple juice. Now that is a skill.

While Frank had some success as an actor, Dean starred in more than 50 films himself, not the least of which was Toys in the Attic, a fabulous Southern Gothic film based on the Lillian Hellman play. Even as a child, I was riveted. And let us not forget Dean in those wonderful Matt Helm movies that poked fun at James Bond.

As for those organized-crime ties, Sinatra was allegedly a wannabe and went to them. Martin had such charm that they came to him, but he did them small favors only when he felt like it. He didn't need them to make him feel important. When you're on your own variety show with, among other luminaries, with your friend Frank Sinatra as a special guest, who has time to impress the mob?

— tim sampson
Posted by dino martin peters at 7:32 AM

i kinda feel bad for Frank cause hes soo great!..but hes not Dean Martin..it not fair to him :/ if there was no Dean then id say Frank was the best singer/preformer,etc....but there was a Dean n he was better, Sorry Frank you're still the Chairman just not the King

Hey pallie, thanks for sharin' your Dino-reflections...gotta say for myself that I could and still can't understand what anyone sees in the frankie....he was always uptight and bossy...so totally totally not cool...while our Dino is the King of Cool, the Master of Hip, and the Ruler of Randy!

I also vote for Dino. His charm has no equal. Frankie was great, of course, but our Dino... he's and will be always the king, the one and only. I love his menefreghista way of life.

Yea, luv Frank tho, i think his tough guy persona, on the surface at least, was part of his coolness hate the fact he was a mob wanna be tho,the way DM handled them as opposed to Sinatra made DM a much tougher and cooler guy, When Frank said jump you said how high? 'cept Dean would just say No which was really cool...but i understand why ppl luv Sinatra just dont understand how you could choose Frank over Dean

Hey pallie, man Kinezoe, does so loves how you are likes totally absolutely sold out to only our DINO!!!! I never have and never will be able to understand what anyone sees in the frankie....yeh a passable voice, but likes the ultimate in un-cool...it's Dino all the way for pallies likes you and me...and his way of life is unparalleled....thanks for showin' your Dino-devotion once again....

Hey pallie, well Miss Catie, I have learned to appreciate the jer to a much better extent that in the past 'cause I have learned of his likes totally deep devotion to our beloved Dino...gotta say that I diggs your Dino-post of the great appreciato that the jer has for our great man...but when it comes to the frankie...he was simply just 'nother Dino-wanna-be....and Dino-hanger-on...and our Dino didn't want or ever need such....always and only it is Dino for this dude....'cause truly, only Dino matters....

I don't agree with you at all DMP. Frank was great entertainer, and Dean knew that and respected that too! Two of them where like brothers, and respected each others personalities and talents. Frank is after all the Voice, and sometimes people forget that he was a great entertainer as well! Nothing like Dean, but great non the less!

Hey pallie, thanks for sharin' your thoughts Maria...and we will simply had to disagree on this one...if I remember readin' Tosches stellar Dino-bio correctly, there were years when our Dino and the frankie saw each other perhaps once, and maybe not at all....truly our Dino needed no one......

Yes that's true... this was at the end of Dino's life... After together again tour when Dino left.
But even though Dino was always a loner, even he loved Frank and saw him as his brother! They had connection, nobody else ever had. And if i may say, none of us, you, me or even Tosches would know how Dean felt about Frank. Mostly becouse no one but Frank and Jerry knew the real Dean Martin, or at least they knew more then anyone else.
And after all, give Sinatra more respect. He was a great singer, performer and even actor (in some movies).

Hey pallie, thanks for more of your thoughts Miss Maria. If memory serves me correctly, and I will have to do some re-readin' of Tosches, it was not only near the end of Dino's life that Dino had little contact with frankie...the only one that even came close to knowin' our Dino was Jerry...they spent a decade as constant companions...no one before that, or ever after that got that close to our beloved Dino. As I see it, it was the frankie that wanted and needed our Dino...just like me....and never the other way 'round....I respect frankie as just 'nother Dino-hanger-on...the very way that I sees myself...of total non-important to our King of Cool....

yea but they made up over a dinner roll food fight right? and just because they werent seeing each other didnt mean they loved eachother any less, the love of Deans life was Jeannie but he divorced her and he was bestfriends with Jer and didnt see him for 20 years..plus he was changed after Dino passed away n frank probably didnt understand y he left the tour so fast..And no matter how much we research him and learn about Dean we never actually knew him so there'll always be things you will never know about him..we dont know everyone of his friends and how well they understood him..so take it easy Dean and Frank are the greatest entertainers and both deserve respect this is all a matter of opinion

Hey pallie, sounds like I have rendered you speechless Miss Maria....best wishes as you finish off your graduation requirements....

Hey pallie, thanks Miss Catie for more of your thoughts...indeed all our thoughts are mostly matters of our personal opinions...just gotta 'fess up that I am likes a Dino-only kinda of Dino-devottee...

No, you did not make me speechless, trust me it take skills to do that. It's just that i know you well enough, and i just don't want to discuss something with someone who has only one opinion. Try being a little more open minded!

Hey pallie, again, thanks for your thoughts....gotta 'fess up that when it comes to Dino, I am absolutely, postively, totally only devoted to our Dino....