Hey pallies, dudes likes as promised here is part duo of Mr. Gilligan's hip Dino-prose on "The Ambushers" from his Retrospace blogg-o. Just listen a few of likes Gil's words of Dino-perspective......"That's precisely what made Dino so great - he was too busy having fun to take this acting bit seriously. Every line he spoke was with a sly wink to the camera, and audiences ate it up."

Indeed, pallies likes you and me hang on every Dino-word our great man has ever spoken....'specially in the Dino-perfect Helm capers. So enjoys likes readin' more of Gil's Dino-prose, truly spoken as likes one who knows, loves, and honors our Dino....to the MAX! Thanks Mr. Gilligan for doin' your part to spread some Dino-magic to your readers and helpin' draw more and more pallies to true Dino-addiction. Dino-pysched, DMP 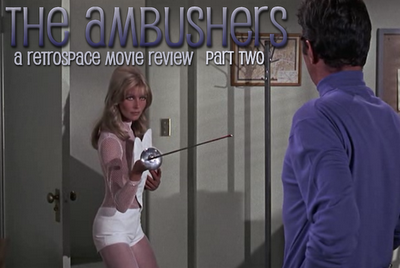 When we last left Helm, he'd gone apeshit after being drugged by Francesca, ripping her clothes off then passing out cold. Fortunately for him, Sheila shows up and the tables are turned on Francesca. 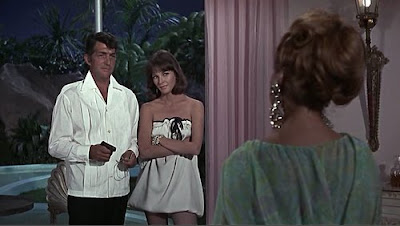 If you'll recall, Sheila was supposed to be insane. She'd driven her top secret flying saucer into the jungles of Acapulco and been captured. Months later, the US government finds her wandering around the jungle, crazy as a shithouse rat. What happened? She seems in perfect control. 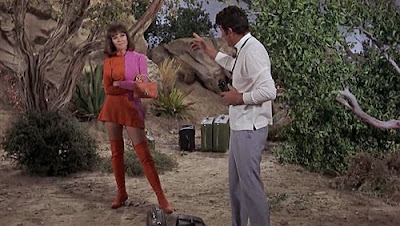 It seems Sheila is, in fact, quite sane - she's been pretending. (I'm not exactly sure why she was doing that, but I'll go with it. Don't ask questions, just play along.) It's this kind of ridiculousness that gives this movie a bad rap (as I mentioned, Michael Medved called this one of the 50 worst films of all time). I conted that it's no worse than Danger Diabolik, a similarly styled movie which has a huge cult following, and much respect. Sure, The Ambushers is tongue-in-cheek, but is that a bad thing? 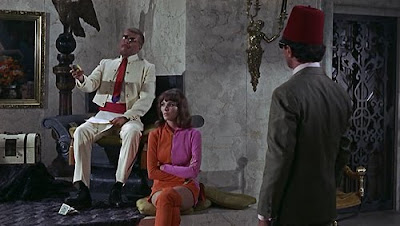 Well, it doesn't take long before both Helm and Sheila are captured by the diabolical Ortega in his secret lair (a la. Dr. Evil). A man in a Fez (just like Will Farrell in the Austin Powers movie) wants to purchase the government UFO from Ortega.

Francesca is also there, and she too wants to purchase the flying saucer. 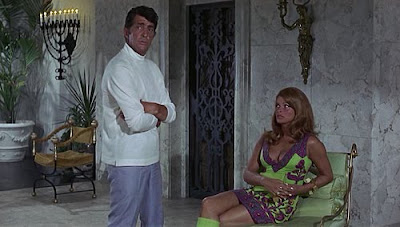 However, Ortega reveals that neither Fez nor Francesca will get their precious UFO. The sick bastard is selling it to the Chinese! To add insult to injury, Ortega then sentences Helm to death by firing squad and wants to make Sheila his personal sex slave.

We quickly discover that Francesca is a pretty resourceful lady. While Helm is preparing to have his brains blown out, she puts some lipstick on Sheila (obviously, the same deadly trickery she used on Helm earlier). 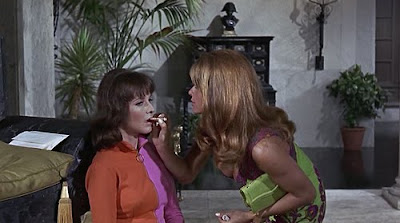 Then, the tricktess, Francesca, finds her way to the hidden flying saucer, but is manhandled by that dirty Fez wearing asshole before she can get in. 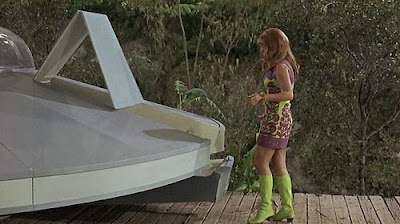 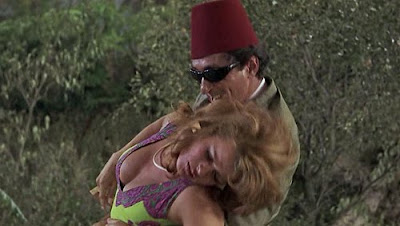 What this slimy Fez wearing sonofabitch doesn't realize is that only women can pilot the UFO. You heard me - for some reason this ship kills men. This is why ICE had Sheila pilot the saucer in the first place.

Meanwhile, Helm is getting ready to die by firing squad. He asks for one last cigarette - little do they know the secret agent smoke acts as a laughing gas. Quintano, the firing squad leader and henchman, is reduced to tears and uncontrollable laughter. 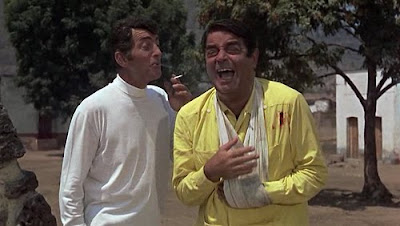 I've gotta say here that I've read a lot of reviews for this film and they all say the same thing: Dean Martin phones this role in. Obviously, these critics just don't get it. That's precisely what made Dino so great - he was too busy having fun to take this acting bit seriously. Every line he spoke was with a sly wink to the camera, and audiences ate it up. Dino is the anti-Liam Neeson... if you get my meaning.

Anyway, Sheila has drugged Ortega with her lipstick, and has him all hot and bothered aboard the UFO. Ah, but let's not forget that this flying saucer KILLS MEN! 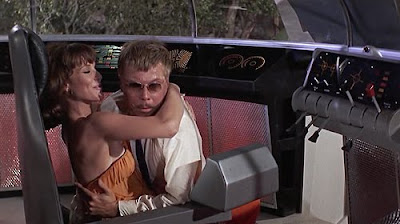 In the climactic scene, Sheila is aboard the UFO which is like a runaway beer truck spiralling down a train track toward the edge of a cliff. However will she escape? My main man, Helm, puts Sheila on the back of his motorbike and send the UFO off the cliff where it explodes into a million pieces. 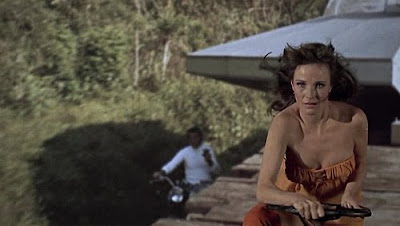 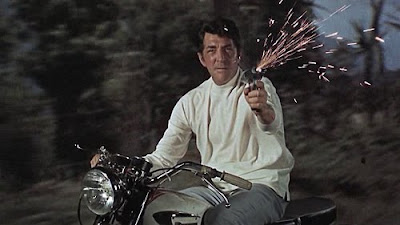 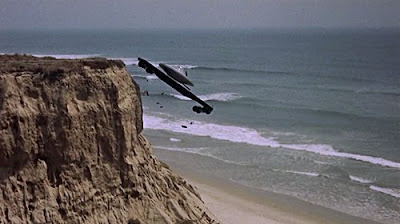 The movie's epilogue is perfect. Helm is making advances at a new ICE recruit with Martin's "Everybody Loves Somebody Sometimes" playing in the background. For some reason this chick just isn't in the mood. This simply doesn't happen! Has Helm lost his mojo? 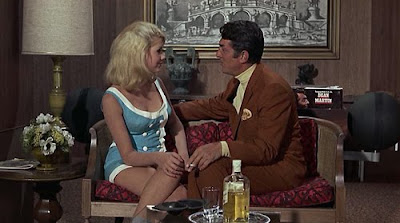 He changes the record to a Sinatra song ("Strangers in the Night") and suddenly she can't control herself. She's all over him.

Get it? If you don't, chances are you would hate this movie. For the rest of you who appreciate Dino's outlandishly cool persona, you will lap this movie up and beg for more. Personally, I admire the Rat Pack mentality: those ultra-cool hipsters who were constantly in pursuit of the fairer sex, and only asked for two things out of life - a stiff drink and a close shave.

The Ambushers is James Bond, Austin Powers, and Leslie Neilson all rolled up into one. But what sets it apart for me is Dino. I could watch him mow the yard and be glued to his every move. He was and will always be the very definition of cool. And never was he cooler than in The Ambushers.
Posted by dino martin peters at 7:22 AM

love this review - my sentiments exactly! the matt helm movies were made for dino lovers - all the reviews that said they were not well made don't appreciate the dean martin charm - and these helm movies were just the right vehicle for him to show it off.

Hey pallie, Dino-girl, I'm with you on this....Gil certainly "gets Martin"....the Helmer flicks are all 'bout our beloved Dino simply and perfectly playin' his groovy Dino-persona to A++++++ perfection.....thanks for stoppin' by and droppin' some Dino-patter!