Hey pallies, likes today's Dino-post comes from a new blog tagged "Big Hollywood Dynamite" (clicks on tagg of this Dino-gram to goes there) by a blogger tagged Jon C. Hopwood. Mr. Hopwood shares a few Dino-details surroundin' the break-up of our beloved Dino and the jer. I always loves learnin' more 'bout our Dino and discovered in this post that our great man was a top ten box office star in 1967 and 1968....#4 in '67 and #6 in '68.

Mr. Hopwood also gives a nod to the trio of great Dino-posts from Michael J. Hayde's blog BETTER LIVING THROUGH TELEVISION. ilovedinomartin is delighted to feature a new blogger who is featurin' our Dino. Hopes Mr. Hopwood will feature our great man often and helps many, many pallies comes to know, love, and honor our Dino! Dino-delightedly, DMP 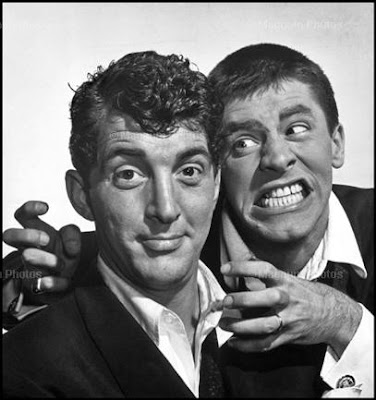 It's probably falls into the "Hard to Believe" category, but Jerry Lewis was one of the top box office stars of all time. From 1951 through 1963, Jerry Lewis made the list of Top 10 Money Making Stars 11 times, either with Dean Martin or solo, failing to make the list only in 1959 and '60.

Dino, himself, didn't make the list again until after the ebb tide of Lewis' screen popularity went out. Martin made the Top 10 List of Box Office stars twice as a solo act: Buoyed by the Matt Helm spy spoof series, he cracked the Top 10 in 1967 and '68, ranking #4 & #6, respectively.

The comedy team of Bud Abbott & Lou Costello, Martin & Lewis' only rivals as a comedic team in terms of box office popularity, had debuted on the list in 1941, the first of four consecutive years in the Top Ten, and were #1 in 1942. They also made the list in 1948, '49 & '50, seven times in total, one more than Martin & Lewis. However, by the early '50s, they definitely were suffering from over-exposure. Their career went into eclipse, as Martin & Lewis became America's comic darlings.

The year after being voted onto the money makers list by theater owners, Martin & Lewis duplicated Abbott & Costello's distinction by being named the #1 Box Office attraction in America. For the next four years, they were ranked #2 two straight years, then #7 and #6. In 1957, Jerry Lewis as a solo act cracked the Top 10 at #9 and was #3 the following year, his best showing without Dino.

Here is links to an excellent series on the Dean Martin-Jerry Lewis crack up, featured on Michael J. Hayde's blog BETTER LIVING THROUGH TELEVISION:

I found your blog interesting and useful. I added your blog to my favorites and i will come to visit again tomorrow. I have a blog about how to get him back after a break up :)