Hey pallies, likes been meanin' to post this cool Dino-feature from our pallie Risen2b for quites a Dino-few, but likes been so much Dino-action that just finally gettin' 'round to it.

At his happenin' blogg "Blog-O-Rama" (clicks on tagg of this Dino-gram to goes there) comes this trib to the Dino and the kid classic "At War With The Army."

Thanks to Risen2b we haves this whole Dino-caper to enjoys on the web. Enjoys the patter that our pallie shares as well. Great to see Dino-devotion at so so many pads all over the web... Dino-delightedly, DMP

At War With The Army 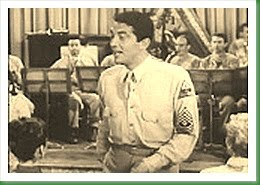 With Jerry Lewis' almost maniacal control over any material that features him in it, I was surprised to find out that the first movie collaboraiton between him and Dean Martin is in the public domain and is available at Archive.org. Thought I would toss it up since it's always great to see Dean Martin in the movies and at that time Jerry Lewis was fresh and funny.

This is a fun WWII-era B&W movie, full of Dean Martin along with Jerry Lewis and his ridiculous goofiness! Featuring Dean Martin and Jerry Lewis in their first collaboration.
Jerry is a hapless private and Dean is the bossy First Sergeant of a slipshod platoon at a stateside training base. Jerry and Dean were friends who grew up in the same neighborhood before Uncle Sam made GIs out of them. All of the stereotypical military comedy characters are present, including the loudmouth drill instructor, the conniving supply sergeant, the doting corporal and the bumbling, hen-pecked company commander.

Sit back, relax, and prepare for some laughs!