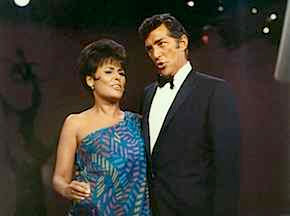 Hey pallies, I'm grateful to guy tagged Hal who shared the passin' of the great Miss Lena Horne with his readers at his pad "Horn Section." As you will note below, Miss
Lena died last night at the age of 92.

We express our deep sadness at her passin' and say our thanks for sharin' this trib that also includes a great clip of our Dino and Miss Horne makin' some great music on the Dino-show. To view this in it's original format, likes just clicks on the tagg of this Dino-gram. Dino-rememberin', DMP

Sad to report that the great Lena Horne passed away Sunday night at age 92. She was best known for her appearances in 1940's musicals such as CABIN IN THE SKY and STORMY WEATHER but those of my generation first became familiar with Ms. Horne through her near-constant appearances on popular variety shows (FLIP WILSON, LAUGH-IN, DEAN MARTIN) and a very memorable appearance as herself on one of the most famous episodes of SANFORD AND SON. Then in her late fifties, she still had us understanding why Freddy G. was so smitten with her.

Here's Ms. Horne on a 1968 episode of THE DEAN MARTIN SHOW signing solo, then with the star of the show. Enjoy!

Posted by dino martin peters at 7:52 AM

Hey, many thanks for the link and kind words! I was really pleased to find the many YouTube clips of Lena and Dino; the one in my post was one of several terrific ones.

Big fan of Dino's too, great blog you got here! Mr. Martin's own passing really saddened that Christmas Day back in '95, I remember. Already sad because we'd just learned about Butterfly McQueen's passing.

Again, great blog paying tribute to Dean here, and thanks!

Hey pallie, likes no problemo Mr. Hal. I loves to honor those who honor our Dino! Glads to know that you are a Dino-lover yourself...hopes you will drops by anytime to get your Dino-fix....thanks again for choosin' Dino to be featured with Miss Lena...

Check it out! Ms. Horne was born the same year as our Dino!

That's a wonderful duet from 1968. And I remember it well! I watched that show when it aired.

Hey pallie, likes ain't it wonderful to be able to remember many of those clips when we got to watch our Dino on his show as Dino-history was bein' made each and every Thursday night!

Hi DMP,
How are you sir? Long time not in touch?

Our family used to watch the Dean Martin Show at home many years ago. Thanks for the video with Lena Horne.
I missed it before.
Cheers.

Hey pallie, been thinkin' 'bout you Mr. Andy...thanks so much for droppin' by and glad you loves the Dino-clip with our Dino and Miss Lena...

Hi DMP, You're on line now? I need to send you a copy of Michael Goh's songs. He has made some new copies and wants to send one to you.

You have my email address so please provide me your home address through my email so I can send it to you.

Hey pallie, Mr. Goh's offer is very generous, but I am very reluctant to send my address over the net....just not a safe place for private information....I certainly do not want to offend you or him, so I do hope you will understand...all my best to you and keep lovin' our Dino.....