My first exposure to music was Dean Martin when I was five years old.

Hey pallies, as promised here is a portion of a January 2006 interview conducted by Alon Miasnikov of "Alternative-zine" with heavy metal rocker Bob Mitchell in which Mr. Mitchell shares the depth of his Dino-devotion. As you review this portion of the interview you will note that Mitchell got hooked on our Dino at the tender age of 5 and continues to groove on the Dino-sound to this very Dino-day. 'Specially loves this here Dino-comment.....

"Besides, if you think about it, Dean had a Metal attitude back then, you know. Wine, Women and Song. I mean isn't that what Metal is all about?"

Ain't it likes really just the coolest to have our Dino thought of in heavy metal terms....the Dino-attraction is simply, obviously for EVERYONE!!!!!! Thanks to Miasnikov for conductin' this interview and for Bob Mitchell for so boldly, bravely, and openly proclaim his Dino-passion in such glowin' Dino-terms!!!!! To read the entire interview, likes just clicks on the tagg of this here Dino-gram. Dino-sharin', DMP 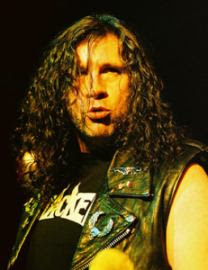 A bit about the history of the band, how did the band originally form?
Bob Mitchell: Oh God the history question again (Laughs)... sure thing. I love telling the story especially when we are being introduced to new fans. Please understand that this will be one of the longest answers, I believe, you will ever get (Laughs), OK? Alright then, here we go. Wow this goes way back just so you understand. I've been into music all my life. My first exposure to music was Dean Martin when I was five years old. Dean was a great entertainer. Besides, if you think about it, Dean had a Metal attitude back then, you know. Wine, Women and Song. I mean isn't that what Metal is all about? He's my showbiz idol. So from Dean it evolved into The Beatles then Deep Purple, KISS and it just snowballed from there which of course led to my involvement in bands and so forth. Now let's see, the first album I ever bought was "KISS ALIVE". The first Metal album I ever bought was "MAIDEN JAPAN". My love for Metal has, obviously, never diminished and it never will, but, even after all these years I still listen to Dean Martin.
Posted by dino martin peters at 7:08 AM