Hey pallies, likes after readin' Mr. Gilligan's stellar Dino-review of "The Ambushers" likes I just had to search his Retrospace pad for more of our Dino. Today's Dino-post is a review that hipster Gil did for Helmer numero uno, "The Silencers."

Mr. Gilligan begins his Dino-thoughts with these words...."the ultra-cool Dean Martin has butts and boobs in his face the entire film." So takes it from there pallies and enjoys Gil's take on our Dino as Matt Helm. To view this in it's original format, likes just clicks on the tagg of this here Dino-gram. Dino-sharin', DMP 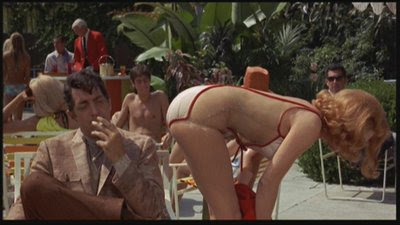 I'm starting my review of The Silencers (1966) with this image because I think it encapsulates the movie better than any other frame: the ultra-cool Dean Martin has butts and boobs in his face the entire film.

I'm not going to outline the plot of the film, or even give a real review; however, I will say that I was astounded at how similar it was to the Austin Powers films. It is so neatly identical that I'd sue Mike Myers for every penny he made from it. Of course, imitation is the sincerest form of flattery (and The Silencers borrows an awful lot from James Bond).... so, I guess I'd hold off on the litigation for right now.

Anyway, Dean is his usual cool likeable self as the special agent Matt Helm, and nothing at all like the goofy Austin Powers... except for an extreme case of excessive mojo. I lost count of how many beautiful women throw themselves at his feet begging for some lovin'... I'm sure it would make a great drinking game. In one scene, Dean literally rips Stella Stevens' clothes off and then manhandles her. This is Austin Power's mojo times ten.

But the similarities don't end there - not by a longshot.

There's an evil mastermind who looks and talks remarkably like Dr. Evil, and he even has an underground lair. Furthermore, the evil mastermind has a diabolical (and hilariously convoluted) plan to destroy the world. His plans are implemented by an actor bearing a striking resemblance to Robert Wagner, aka "Number Two" (seen below). 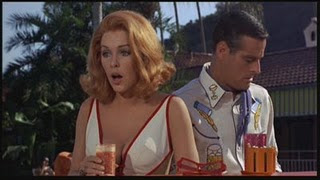 The evil mastermind has plenty of nameless henchmen whom Dean kills haphazardly one by one just as in the Austin Powers movies. There's also plenty of nifty Bond gadgets, Dean's boss is just like Michael York - straight laced and uptight, and there's even a character named Lovey Kravesit! I could go on and on, but you get the point. Sure, Austin Powers borrows a lot from Bond and the Flint movies (not to mention Jason King), but The Silencers seems to be its principal inspiration (yet it's not even mentioned in the Austin Powers Wikipedia article).

The storyline is just as convoluted as Dr. Evil's plans - things seem to happen for no other reason than to provide a sexy moment or a killing to wake up the audience a little. At one point Nancy Kovack is shot twice in the back and at another point Cyd Charisse is shot dead on stage - in both cases we never fully understand why. Then again, it doesn't really matter does it? We're having way too much fun to be bogged down with things like a backstory and motives.

sauce since the first day of filming - he's half awake and slightly slurred for the better part of the picture. My favorite scene would have to be where Stella Stevens and Dean Martin are driving down a winding road and drinking like there's no tomorrow. Dean's got a veritable wet bar in the backseat, and the pair of them do shots! 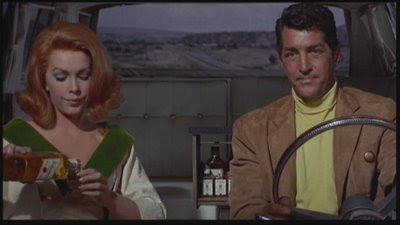 I think there was a plot in the film somewhere, but really the story is nothing more than a means to carry the audience from one cool-funny-and/or-sexy scene to another. But that's okay, since the movie delivers mightily on all three counts.

And before I go, a big shout out goes to the Dino Lounge, where the memory of the man who defined cool is kept alive. Keith also has some great screen captures from the film here. Cheers!
Posted by dino martin peters at 1:06 PM