My Rifle, My Pony and Me - Dean Martin and Ricky Nelson

Hey pallies, and likes here is more Dino-magic from Miss Dawn's site "Chick Flicks Musicals." Again, loves how Miss Dawn has shared some Dino-details 'bout the song and flick from which it came that are likes totally new to this Dino-holic. Just goes to show that even if you loves our Dino to the max, there is always somethin' new to learn 'bout his life and times.

Again, thanks Miss Dawn and keeps sharin' more Dino-clips with your pallies so that they gets as likes totally Dino-addicted as you are...and likes how cool willa that be!!!! To view this post in it's original Dino-format, just click on the tagg of this here Dino-gram. Dino-ever, DMP

My Rifle, My Pony and Me - Dean Martin and Ricky Nelson

The song "My Rifle, My Pony and Me" was originally used as the theme for Red River (1948), another John Wayne western. The original title was "Settle Down".

On May 8th, just one week into shooting ‘Rio Bravo’, Ricky Nelson celebrated his 18th birthday. As a gift, John Wayne and Dean Martin gave him a 300 lb. sack of steer manure, which they then threw Nelson into as a rite of passage.

Dean Martin's agent approached Howard Hawks to consider his client for the role of the drunken deputy Dude. Hawks agreed to meet with Martin at 9:30 the next morning. When Hawks learned that Martin had done a show in Las Vegas until midnight, and hired a plane to fly him to the meeting, Hawks was so impressed that he simply sent Martin to get a costume and told him he had the part.

One of Dean Martins favorite past times was to watch, OLD WESTERNS.
Posted by Dawn at 7:22 AM
Labels: dawn author, dean martin 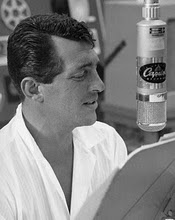 An Italian-American singer, film actor and comedian. Martin's hit singles included "Memories Are Made of This", "That's Amore", "Everybody Loves Somebody", "Mambo Italiano", "Sway", "Volare" and "Ain't That A Kick In The Head?". One of the leaders of the "Rat Pack", he was a major star in four areas of show business: concert stage/night clubs, recordings, motion pictures, and television who was nicknamed the King of Cool. Click picture to view fan websight.
Posted by dino martin peters at 10:11 AM

I love this song and I love Rio Bravo. Wonderful. Hope you're havin' a nice day. Cheers!

Hey pallie, Kinezoe my man...how outstandin' of ya to takes the time to leaves some Dino-thoughts....indeed this is a totally wonderful clip from one of the greatest flicks that our Dino ever starred in...again, thanks for sharin' some Dino-love here at ilovedinomartin.....

Just simply beautiful. A nice way to remember everyone in that clip. Thank you for sharing it.

As a gift, John Wayne and Dean Martin gave him a 300 lb. sack of steer manure, which they then threw Nelson into as a rite of passage.

Hey pallie, nice to hear from you Miss Sannie, and I couldn't have said it better myself...we thanks our new pallie Dawn for sharin' her Dino-devotion so that's ilovedinomartin coulds share it with ya...

Our Dino always likes resonates with this dude...but 'specially in this stellar Dino-classic...

Hey, one of my favourite songs. Been missing your blog DMP. Must come back more often to listen to Dino.

Hey pallie, Mr. Andy it is always such a Dino-pleasure to have you drop by and leaves some Dino-thoughts...please do comes by as often as your schedule permits...glads you loves this song...and again, thanks to Miss Dawn for sharin' it with her readers, so that I coulda share it here as well...

I love it! This is such a good song! Thank you!

Hey pallie, nice to have you stop by and glads you diggs the Dino-tune...hopes you makes some return viewin's of ilovedinomartin....