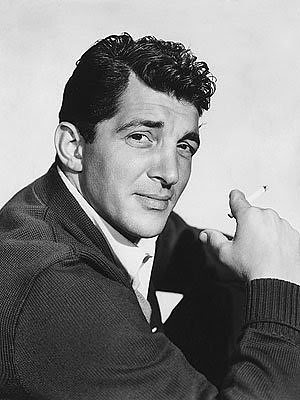 Hey pallies, likes with all the talk 'round the web of Director Martin Scorsese suggestin' Mr. Robert DeNiro to plays our Dino in Scorsese's proposed bio of the frankie, I found this Dino-reflection from seven years ago to be very Dino-interestin' indeed.

From the pad tagged "Slate" by a chick tagged Virigina Heffernan comes this oh so so provocative Dino-thought...."Is Punk'd star Ashton Kutcher our new Dino?" Finds Miss Heffernan's comparison of our beloved King of Cool and Kutcher's King of Punk very very evocative for Dino-sure. 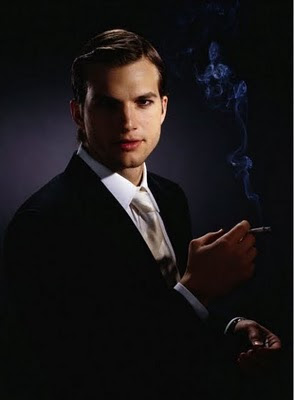 Does likes seem that our Dino and the hugely up and comin' Ashton Kutcher woulda be likes possible soul mates. Likes 'specially totally diggs this last paragraph my this Virigina lady....

"All right, so Ashton doesn't sing, and he's not a real delinquent like Dino. Martin boxed; he stole; he could barely read; he knew the mob. He dealt blackjack as a child. He walked all over women. But, like Ashton, he claimed that life was easy, he disdained sincerity, he traveled in a gang, and he let the glint in his eye win him a pass so he could insult and double-cross people—for the honest fun of it. As Martin's biographer Nick Tosches puts it, using that tricky word that gets a new meaning every decade, Dean Martin was a 'punk.'"

So pallies, likes wonderin' whata do you alls think 'bout youthful hipster Ashton Kutcher playin' our Dino? Wills oh so look forward to all your Dino-thoughts...as our Dino always sez...."keeps those cards and letter comin' in." Dino-raisin', DMP btw, pallies, as per Dino-usual, alls you gotta do is click on the tagg of this Dino-gram to read Virgina Heffernan's thoughts on our Dino and Ashton Kutcher in their original format.

Ain't That a Kick 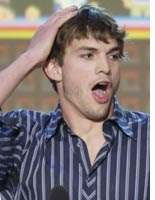 A spectacular-looking punk for a new generationA few years ago, with little fanfare, American pop audiences got what they had long claimed to want: a new Dean Martin—a blithe, vain, jaunty, jerky, prankster party boy who is, above all, spectacular-looking. He's Ashton Kutcher, heartthrob-fool of That '70s Show (Fox) and host of Punk'd (MTV, Mondays 10:30 p.m. ET), a program on which he, in a revision of Martin's notorious roasts, plays tricks on celebrities, and then uses hearty handshakes and some form of guy's-guy hypnosis to persuade them to laugh it off. Like Martin, Kutcher may find that his authoritarian charm is lost on the generation before and after his own, but—for now anyway; no reason to forecast a Martin-like retreat into isolation and regrets—he's carefree.

On Punk'd, under Kutcher's spell, young Hollywood does indeed look like high times. They're all just hanging out: Justin Timberlake, Britney Spears, Pink, Jessica Biel, Jessica Simpson, Stephen Dorff, Seth Green, the Osbournes. It's a truant's world of pranks and "bits," smart, quick impersonations that cross up their own expectations of star treatment. What good sports. They're not stuck up; Kutcher wouldn't allow it. He's from Iowa, after all—a farm boy who once skinned deer for a living. (Dino, a casino boy, came from Ohio.)

Kutcher finds life in L.A. a goof. Give your keys to a stranger for valet parking?! "Back where I come from, you park our own damn cars," Kutcher commands from the screen. "I could park an F150"—buddy, that's a truck—"in the crack of your ass."

Like Martin, Kutcher can flirt with the camera, solo, and seem to delight himself. Punk'd is his own creation and fiefdom; it's a nifty out-of-towner's reproof to Hollywood. "People go out to parties and try and, like, set trends," he says, as if making a discovery. "You're not cool because you're on the red carpet. I'm going to set a trend. The trend of you getting punk'd."

So far on the series, getting punk'd means getting strip-searched outside the MTV building; being accused of harassment by a child who was in fact lecherous to you; facing hicks in RVs who claim they're your kin; and discovering you're implicated in a motorcycle chop-shop racket. All of these sketches are overseen by Kutcher, who, together with a trio of accomplices, micromanages the whole scene. Kutcher often even feeds his minions lines through a headset. (Significantly, the man himself claims to be immune to punking. Spears once made an incoherent and half-hearted attempt to get him, but he turned the joke around. "You cannot punk me!" he told the camera, fronting like a wrestler. "It cannot be done! It cannot be done!")

The pranks themselves are medium-funny. On other shows in which a celebrity is led on—actually, just on the great Ali G Show—the marks have complex and telling reactions. On Punk'd, the kids look amused and at best dazed, but confident, too, that the contrived messes are only brief hassles that, whatever their seeming gravity, will soon pass. When accused of owning illegal motorcycles, Pink paced around a bit before she told the cops, "Why would I do this when I'm a famous musician with plenty of money? I'm calling my lawyer."

That's generally as far as it goes for the punkee. Once you've been punk'd, and just as you look a little shaken, you're accosted by Kutcher, who gets you in his joyful aura. If you're good, if you're—check it—cool about it, he might give you the chance to punk someone else, and, whoosh, you're in with him, talking in his emphatic way, loafing around his favorite places, enjoying his golden protection.

"He handled it well," Kutcher explains of Justin Timberlake, whose belongings were repossessed by actors claiming he owed back taxes. "He was cool about it, so I was like, 'You know what Justin? I'm going to let you get somebody back. We decided to throw you a bone.' " In earrings and a basketball jersey, Timberlake would seem to lack some of the runway insouciance of Kutcher, a former model who wears open shirts, gold crosses, and baseball caps from outfits like NASA. Still, Kutcher briefly anointed Timberlake, and no one doubted it. On another episode, he did the same for Spears, who then joined him as a co-host, dressed disconcertingly like him. "My girl," Kutcher said. "And I take care of her. And it's all good like that." Under her cap's visor, in raggedy pigtails, Spears looked euphoric, like the girls Dino used to deign to embrace in public.

All right, so Ashton doesn't sing, and he's not a real delinquent like Dino. Martin boxed; he stole; he could barely read; he knew the mob. He dealt blackjack as a child. He walked all over women. But, like Ashton, he claimed that life was easy, he disdained sincerity, he traveled in a gang, and he let the glint in his eye win him a pass so he could insult and double-cross people—for the honest fun of it. As Martin's biographer Nick Tosches puts it, using that tricky word that gets a new meaning every decade, Dean Martin was a "punk."
Posted by dino martin peters at 11:59 AM

What a pic!! (I mean Dino). Coolness has a name: Dean Martin.

Hey pallie, dude likes I knew my man Kinezoe that you likes woulda have to comment on this post in only for the Dino-pix...as we all knows it's your signature Dino-photo...and likes of course you speaks likes the total total Dino-truth likes when you sez..

"Coolness has a name: Dean Martin."
Likes keeps lovin' our Dino...and btw what d'ya think of Kutcher playin' our King of Cool?

If you want my honest opinion, I don't like him for playin' our Dino.

Hey pallie, thanks for the honest reply.....as someone I know that is likes totally sold out to our Dino....likes I truly value your honest opinion...hopes to see some more Dino-devotion at your outstandin' blog likes really Dino-soon....all my best to you by Dino-lovin' pallie....

i dont agree that dean disdained sincerity - he was known as one of the sincerest and nicest people in hollywood and in terms of double crossing people for the fun of it - that sounds much more like frank than dean. dean may had had a rough beginning in life - but i think it was more a result of circumstances than a judgement on his character. i for one am not in favor of this choice to play dino.

"i dont agree that dean disdained sincerity - he was known as one of the sincerest and nicest people in hollywood and in terms of double crossing people for the fun of it - that sounds much more like frank than dean."

I thinks that our Dino's public Dino-persona was usually much more likes this then his private persona....'though as he a bit older, his personal and private personas seems to have likes gotten more and more congruent....

Ashton Kutcher? I think NOT: not a suave bone in that boy's body. Maybe Jerry Lewis but not our Dean.

Hey pallie, ha, ha...I knews that even the suggest woulda gets some strong response from pallies likes you Miss Sannie....thanks for makin' your Dino-thoughts known....