Hey pallies, here's more on Dinoemulater Mr. Mark Adams who's Dinotrib will be comin' to the states soon. Woulda loves if it cames anywhere nears this Dinoholic's homepad so I could see Mr. Adam's Dinodevotion for myself.

Thanks to Miss Laura Davis of the Liverpool Daily Post for sharin' this interview of Mark Adams with us. To view this in it's original format, just likes clicks on the tagg of this Dinogram. There are so so many dudes makin' likes our Dino and hopefully each and every one keeps bringin' new pallies to knowin', lovin' and honorin' our Dino! Dinodesirin', DMP 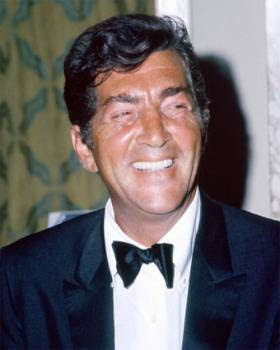 WHEN it came to naming the family dog, Mark Adams’s four children immediately knew what to call him – Deano. As their father has been playing the Ratpack’s Dean Martin since 2002 it seemed a natural choice.

“He’s a black lab with a little white crest so he looks like a negative version of Dean – instead of a black bow tie he’s got a white one,” reveals the 50-year-old performer.

Mark Adams has all of Martin’s charm and, after seven years of acting as him in shows all over the world, also his low vibrato and his mannerisms – picked up from endless hours watching 60s movies.

“The particular way he might hold a cigarette or a Jack Daniels glass. The way he would touch his bow tie. And he had a distinctive walk, almost a stroll,” says Adams.

“I’d say I’m broad shoulded and broad minded like Dean was and I’m a touch over 6ft as he was.

“Actually when I did the first That’s Amore show two years ago I was exactly the same age Dean was when he did his television debut back in 1965.

“He had such a distinctive voice and he was quite self-effacing about it. He’d say ‘look, I’m easy on the ear, I can carry a tune’.

“But every time he sang a song he could absolutely make it his own with the first few bars.”

That’s Amore, based on Martin’s successful TV specials, is coming to the Empire Theatre on November 16 and will then immediately head to America for an 18-city tour.

The Wiltshire-born actor has been to the Liverpool venue before, with his Ratpack show in 2002, which spent several years in the West End.

There is far more than singing in That’s Amore however, demonstrating Martin’s (and Adams’s) versatility as a performer.

“I got to know and love this man and his work and started researching the television shows he had in the 60s and 70s in the States,” says Adams.

“He could command an impressive list of guests like James Stewart, Gene Kelly, Orson Welles, Frank Sinatra of course, Ella Fitzgerald, Lena Horne – anybody who was anybody wanted to be on it.”

In That’s Amore, the actresses playing his backing singers, the Golddiggers, also double up as guests such as Petula Clark, Peggy Lee and Shelia McClain, while Nat King Cole also puts in an appearance.

“We start with the Dean television intro, where the girls burst onstage and Dean comes on for a couple of well known numbers,” says Adams, who lives in Hertforshire with his wife and four children.

“I have a lot of fun with the band and the audience and introduce these guests, who have their solo spots and do duets and sketches with Dean.”

Martin’s image as a carefree boozer was well cultivated by the time he broke into TV, after starring in comedy films with Jerry Lewis as well as Rio Bravo with John Wayne and Young Lions with Montgomery Cliff and Marlon Brando.

Yet he was dedicated to the show – priding himself on memorising each week’s script rather than reading from an autocue.

There were hiccups however.

“The interesting thing is that he didn’t really want to do it and he made so many outrageous demands, one of which is that he would only show up the day of transmission and he wouldn’t rehearse,” explains Adams.

“The leading guy just turns up on the day at one o’clock and listens to the music and then he would go and watch the football match with the producer.

“Then he’d just have a quick camera rehearsal and bang, off he’d go.

“But the producer knew how brilliant Dean was at coping – if he was put in a corner he could box himself out of it and they used to keep the bloopers in because they were arguably more funny than the script.”

THAT’S Amore is at the Empire Theatre on Nov 16. LDP Weekend has three pairs of tickets to give away. For a chance to win a pair simply answer the following question: What was the name of the Las Vegas hotel where the Ratpack held regular shows? Answers on a postcard by 5pm on November 10 to That’s Amore Competition, Liverpool Daily Post, PO Box 48, Old Hall Street, Liverpool L69 3EB or via email to laura.davis@liverpool.com. Usual terms and conditions apply.
Posted by dino martin peters at 7:17 AM

Your blog is unending. The flow of info is unbelievable. Wish this Mar Adams could come to Singapore one day.
Cheers.

Hey pallie, thanks so much for the Dinocompliment....ain't it the greatest that Dinonews abounds...our Dino is more popular then ever....Dinodevotion grows each and every Dinoday...best to you Mr. Andy...