Hey pallies, likes here is installement duo of Miss Nick's look at Matt Helm caper numero three, "The Ambushers." Again, per Dinousual, you can clicks on the tagg of this Dinogram to see this at the Agony Booth pad.


The opening titles set out the tone of this movie in a frank and honest way: It’s chock filled with pretty girls in bikinis on the beach making flirty eyes at the audience. The theme song, not even bothering to try to compete with John Barry and Shirley Bassey, sounds like an unholy alliance between Nancy Sinatra, The Lovin’ Spoonful and Herb Alpert and the Tijuana Brass. If that combination doesn’t fry your brain, then maybe the lyrics will:

I don’t think Mr. Bond has anything to fear from the competition at this point. 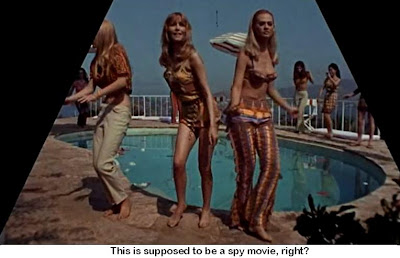 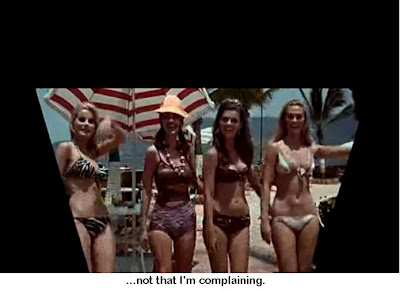 So after a whole load of boob shaking, palm trees and stupid and slightly misogynistic lyrics we see a flying saucer. OK, switching suspension of disbelief on........now! It’s a flying saucer but that’s OK readers; it’s one of ours. A lone pilot gets on board, watched by a team of Air Force officers from mission control. Technicians give the usual “all systems go” malarkey and we are informed this is a test flight; you may turn your papers over......now!

The operation overseen by James Gregory, perhaps the only actor in this movie who slurs his words more than Dean Martin. He announces that if this test is successful, “the planets are next door and the universe is just around the corner!”. Seeing that we’re IN the middle of the universe this is a very dumb statement to make, and from the head of the project as well. Something tells me that with this level of thinking, the mission isn’t going to go well.

The flying saucer glows red and takes off to the sound of a sexy jazz saxophone because that’s just right for a scene like this. The Air Force crew are all happy and take their attention away from their control panels in order to pat each other on the back. As the flying saucer settles into Earth’s orbit, a mysterious truck parks in a fake looking jungle set and starts emitting sparkles from a device mounted on its roof. These sparkles, with a visible range of 3 feet, somehow upset the flying saucer and make it change colour from red to green. The lone astronaut on board looks worried and tries to correct things from its el cheapo control box but to no avail. Mission control, who can see the craft in orbit via some whatever technology, start to panic and cry like little girls as they find all their controls are jammed. Maybe if you hadn’t turned away from your controls in the first place guys, that’s all I’m saying. 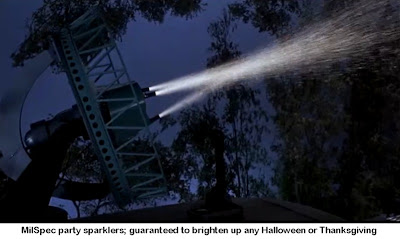 The sickly green saucer is forced to land in the fake jungle set and the astronaut takes off their helmet. They’re a...... wooooman! This isn’t an early example of gender equality in movies by the way, oh no never in this movie, but part of a plot point so ludicrous that I just can’t bring myself to mention it now. Later, when I’ve had a few drinks. She is then confronted by a goofy looking man in a safari suit, sunglasses and sporting a Salvador Dali moustache and goatee combination because wardrobe and make up couldn’t decide on one or the other. 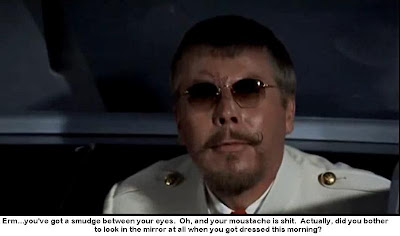