"I can out-dance Dean Martin, but I could never out-sing him," was one of his favorite lines.

Hey pallies, the youngens diggs our Dino, the oldsters diggs our Dino...people of all ages and stages of life, just can't gets 'nough of our great man! The last Dinogram was 'bout a young chick tagged Harley who has become Dino-obsessed. This here Dinogram is 'bout a cetenarian tagged Allen Jackson who has just departed the planet at age 106, who spoke of dancin' with our Dino for the troops durin' WWII.

Mr. Jackson sez of our Dino: "I can out-dance Dean Martin, but I could never out-sing him." We thanks Mr. Brett Prettyman of the Salt Lake Tribune (clicks on tagg of this Dinopost to goes there) for lettin' us know of Mr. Jackson's Dinodevotion.

Just goes to show that pallies of all ages and stages have come to know, love, and honor our Dino....everybody loves our Dino all the times! Let's keep spreadin' the Dinomessage of cool as Dinofar and Dinowide as Dinopossible! Dinoforever, DMP 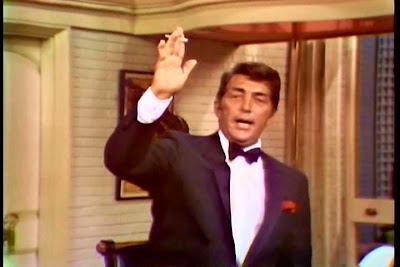 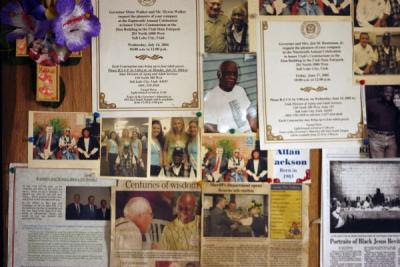 Jackson kept old newspaper clippings and photographs at... (Chris Detrick/Tribune file photo)«123»Allan Jackson loved to tell stories almost as much as people loved to hear them.

He told one about entertaining injured soldiers at Camp Kearns, the World War II Army facility, by dancing with Shirley Temple and Dean Martin.

"I can out-dance Dean Martin, but I could never out-sing him," was one of his favorite lines.

Jackson, who would have turned 106 later this month, passed away Monday at his home in Rose Park. But the stories from his full life may last forever.

Born in the Bahamas in 1903, Jackson had 15 siblings, including a twin brother, Allen, who is still living in New York. Older brother Joseph, 108, is also still living on the East Coast.

Jackson was married seven times, but divorced only once. He outlived six wives, including his last, Esther, who died in 1994. He had 38 children and more than 50 great-grandchildren.

Jackson grew up in Montgomery, Ala., and enlisted in the Army in 1942. He served two years in China, Burma and India, transferring fuel for U.S. bombers before being sent to Camp Kearns in the Salt Lake Valley in 1944.

Pam Todd met Jackson the day he turned 100. Todd was founder of the Kearns Historical Society and was gathering stories from soldiers who had been stationed at the World War II camp. She was instantly enthralled.

"He had a special way about him. He just really connected with everybody," said Todd. "When he said he was happy to meet you he meant it. You always knew he was glad to see you."

During that first meeting, Todd learned Jackson was the last soldier to leave Camp Kearns in 1946 and had chained and locked the gates. Jackson was also featured in the KUED Ch. 7 documentary "Utah World War II Stories," which aired in 2005.

Jackson talked about the segregation black soldiers faced at Camp Kearns throughout the years, but never in a negative way. In fact, Todd said it was the kindness of locals that made him stay after the war ended.

"He felt accepted in Utah. He loved it here. It was his home," Todd said.

In 2006, Todd and Jackson worked together to get the St. Paul United Methodist Church in Copperton added to the National Historic Register. The building had originally served as the church for Camp Kearns, but Jackson and his fellow black soldiers were not allowed to enter the building. They had to use the theater for their church services.

"He was 103 the first time he walked into that church and he held no bad feelings whatsoever," Todd said. "We were walking arm in arm into the church and he said 'Here I am to save God's house.' He was proud of the things he was doing."

Todd called Jackson a walking history book and her trump card when it came to preserving the history of Kearns.

Wayne Hunting was a more recent acquaintance. As a member of the Utah Patriot Guard Riders motorcycle club, Hunting was supposed to arrange for Jackson to ride in a parade during the Kearns Days Celebration in June. The mayor had also officially declared it Allan Jackson Day, but Jackson fell ill the night before the event and was in the hospital. Hunting and the other riders decided to visit Jackson there and ended up taking him for a ride through his Rose Park neighborhood after he returned home.

"He touched our lives remarkably quick. It is just the type of person he was. He had this people magnetism about him even in his frail state," Hunting said. "There are a bunch of rugged bikers who are crying for his loss."