Ed's Epistle......Ramblin's and Ruminations of a Disciple of Dino 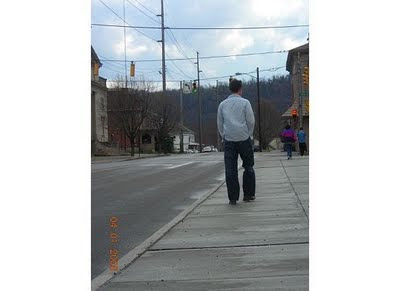 It’s only fitting Dean Martin be conceived, birthed, and raised in a small steel mill town named after a Prussian aristocrat. Friedrich Wilhelm Ludolf Gerhard Augustin von Steuben, one time George Washington’s chief of staff, one time inspector general, and one time Major general. One can only suppose that a man with so many names has equally as many women.

But I digress. Says here, Steuben had some issues handling his large sums money and was never married. Perhaps that has something to do with all those names. But I assume and digress even further. The man obviously has a great resume. He’s got numerous cities and a fort named after him. But it took someone bigger than Stueben to make Steuben famous. He needed help.

Steubenville Ohio. Little Chicago. City of Murals. Home to Jimmy The Greek, Rollie Fingers, and the most famous Cub Scout Drummer ever, Dino Crocetti. Catholicism has Bethlehem, mythology has Mount Olympus, and coolness has Steubenville Ohio. With all due respect to Graceland, it’s no Steubenville. The atomic clock of coolness effectively started on June 7th 1917 at 11:55pm in Steubenville.

I’m not sure what more can be written of Steubenville Ohio that hasn’t already been written. Or Dean Martin for that matter. Or perhaps the relationship between Dean Martin and Steubenville Ohio. The name Steubenville has rolled off the tongue of Dino numerous times in movies and television shows. The film “Scared Stiff” being the most popular that comes to mind. Most casual Dino fans can identify Steubenville as his home town.

From what I’ve come to learn, the relationship between Dino and Steubenville can be compared to an ex-girlfriend where the relationship ended mutually. He found a hotter woman, and she agreed he did. She didn’t blame him, he couldn’t resist. He moved on, she didn’t. She stayed there, by the river. She followed him from afar. She has her story, once upon a time he belonged to her. He remembers her. He mentions her. She was his first love. Understandably he doesn’t come to visit much. He’s famous. One day he did stop by. He made her famous that day. Then he left. Privately she yearned for more visits. There wasn’t any animosity. There couldn’t be. Dean Martin was the best thing that ever happened to her.

I can only offer my experience from the visit to Steubenville during a spring day a couple years back. If I had to roll up the experience in one word, the word I’d have to use is surreal. I visited Steubenville not during the Dean Martin Festival, which occurs yearly during the month of June, but in April instead. There was no parade, no floats, no stages, and no banners. Just the broken sky of a spring day. 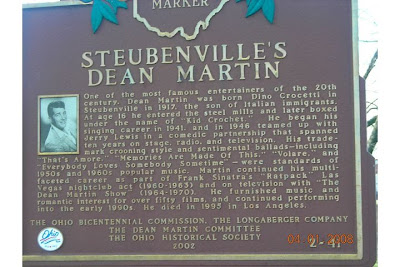 Steubenville in sunlight is like a piece of abstract art. Rusted steel bridges the Ohio River. Scabbed river banks to the east and rolling edge of hill to the east. Dean Martin Blvd hugs the Ohio River around old downtown Steubenville from north and south. The natural boundaries create the surreal feel I’ve suggested. You can walk the entire 1.5 mile by .5 mile area Dino would be familiar within a couple hours.

Modernism took a right when it got to Steubenville. It didn’t even slow down. That’s the beauty of Steubenville. The same city that inspired Dino towards showgirls and show tunes is the city you see today. If there were a way for blight to age gracefully, it has done so here. There are some newer tracts here. The House of Dean is long gone. Just a green little field. Newer houses are in that area now, however they look out of place. It doesn’t work, like when an aging actress gets plastic surgery, sure you look younger, but it just doesn’t look ‘right’.

The House Of Dean should have never been razed. It should have set crumbling like the ruins in Rome Italy. That’s the honor the house should have had been bestowed up on it. If Steubenville has one blemish, it’s that. I suppose it was too much for her to keep. The memories hurt too much.
Posted by dino martin peters at 7:03 AM

Hey pallie, wanna express my deepest Dinoappreciato for sharin' your Dinopassion in this way with all the Dinolovin' pallies here at ilovedinomartin.

I look forward to whatever you have in your Dinoheart that you wanna share with us.

Welcome to work and mission of ilovedinomartin and thanks for helpin' to lift up the name of our Dino and spread the Dinomessage of cool...

Helo my dinofriend!. What a great journey. Reading you is a pleasure to me. Thank you.

But the memory lives so, "stir carefully through the days, see how the flavour stays, these are the dreams you will savour."

I think you are stirring Dino's days with this blog and the flavour and dreams are being savoured by all.
Cheers.

"Stir carefully thru the days, see how the flavour stays, these are the dreams you will savour..."

You have been stirring his days with this blog DMP and the flavour and dreams we are all savouring.
Cheers.

Hey pallie, thanks man....and now with our Dinoholic writin' exclusive Dinoprose for ilovedinomartin, I just knows we are goin' to reach more and more pallies with the Dinomessage...and helps each and every one of 'em gets Dinoaddicted!

Thank you for kind comments!
We will be posting more Dino-quibbles in the near future.