Hey pallies, anyone who thinks our Dino is gettin' less and less known ain't got a brain in their head. Here's a wonderful Dinotrib to our Dino's amazin' Dinoshow done by a pallie tagged Mercurie at the blogg "A Shroud of Thoughts A Shroud of Thoughts." Clicks on the tagg of this Dinogram to goes there.

Hopes all you pallie will takes the Dinotime to read each and every word that Mercurie has taken the time to write 'bout our Dino and his amazin' small screen Dinoventure. This piece of Dinoliterature contains so so much wonderful Dinoinfo on the Dinoshow...who, what, when, where, how, and why. I knows that I learned at least a Dinothin' or two...and even more importantly is the Dinodevotion that shines through this Dinotrib.

Thanks Mercurie for usin' your time and talents to lift up the name of our Dino. Hopin' that many of your readers will develop more Dinounderstandin' and Dinodevotion! Dinofocused, DMP 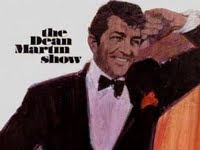 Dean Martin was no stranger to television or to variety shows when The Dean Martin Show debuted in 1965. In fact, with former comedy partner Jerry Lewis, he was one of the guests on the debut show of a variety series called Toast of the Town on June 20, 1948; it would later become better known as The Ed Sullivan Show. Both with and without Jerry Lewis, Dean Martin had appeared on such shows as The Jack Carter Show, The Jack Benny Programme, The Steve Allan Show, The Perry Como Show, and many others. Neither was Dean Martin a stranger to hosting variety shows. Martin and Lewis had served among the rotating hosts on The Colgate Comedy Hour from its debut on NBC on September 10, 1950 to the show's demise in 1955. In 1964 Dean Martin was the guest host of ABC's variety show The Hollywood Palace twice. It was on one of The Hollywood Palace shows which Martin hosted that The Rolling Stones made their first appearance on American television (Martin's jokes at The Stones' expense has since become the stuff of legend).

It might then seem curious to know that in 1965 Dean Martin was not particularly fond of the idea of doing a regularly scheduled television show. The reason was simply that Martin felt that a television series would prevent him from accepting offers for movies and nightclub performances. When NBC then approached Martin about the prospect of doing a variety show, he demanded terms so outrageous that he was sure the network would turn him down. Quite simply, Dean Martin demanded an exorbitantly high salary, that he be required only to show up for the actual taping of the show, and the show be taped on Sundays. Much to Martin's surprise, NBC accepted his terms.

The Dean Martin Show debuted in the fall of 1965 to a strong start. Its original format was very basic. Dean Martin and pianist Ken Lane were the series' only regulars. While Dean acted as host and sang a few songs, much of the show was filled with big name stars. It was very soon that the ratings for The Dean Martin Show began to falter. Having made a very big investment in the success of the series, NBC brought Greg Garrison in as the show's producer and director. Garrison was a television veteran who had directed such series as The Kate Smith Hour, The Milton Berle Show, and Meet Corliss Archer. In conjunction with musical director Lee Hale, Garrison set about revising the format of The Dean Martin Show. Martin's role on the show was increased, while the number of guest was decreased. Both Garrison and Hale worked hard to make Dean Martin more comfortable with the show. In fact, it was not unusual for Garrison to overbook guests should there be a need to replace them. Garrison and Hale's strategy worked. The Dean Martin Show climbed back to the top of the ratings. By 1967 the show was so successful that Dean Martin received from NBC what may have been the most lucrative contract up to that time.

From that time forward the format of The Dean Martin Show would only change a little over the years. Each show would begin with the strains of Dean Martin's 1964 hit "Everybody Loves Somebody." Dean would then enter by stumble down a flight of stairs, which was soon switched to him sliding down a fireman's pole. Dean would sing a song, tell a few jokes, and introduce his guests. For the next hour there would be more songs (if a singer was the guest on that week's show, he or she would usually perform a solo number and later a duet with Dean), skits, and chat. The Dean Martin Show did have a few regular segments. At some point in the show Dean Martin would retire to his music room, whereupon there would be a knock on The Closet door. The individual in The Closet was always a celebrity guest and most of the time Martin had no idea who would be (this was done to keep his reactions spontaneous). Among the guests who emerged from The Closet were Jack Benny, Johnny Carson, Jimmy Durante, Red Skelton, Flip Wilson, and many others. The Closet was conceived when Garrison needed a means for Martin's uncle, comedian Leonard Barr, to make a surprise visit to the show. In another regular segment, drawn from Martin's nighclub act, Dean Martin would start singing a standard which would invariably end in a gag. The show generally ended with a production number with Martin's guests, often in the form of a musical sketch.

For the show Dean Martin adopted the persona he had created after he had parted ways with Jerry Lewis--that of a drunken, slightly lazy, womanising playboy. This worked well with the atmosphere of the show, which was relaxed, affable, and unpretentious. Although the show was always taped, it very much seemed like a live show. Much of this was due to the fact that Dean Martin had demanded that he be present only for the taping of the show. For only two days The Dean Martin Show would occupy Studio 4 at NBC in Burbank. Saturday would be occupied by rehearsals and blocking the camera setups, with musical director Lee Hale standing in for Martin. On Sunday the show was taped. Although Martin memorised his scripts beforehand, he most often read from cue cards. If he flubbed a line, he simply made a joke and went on. There were no retakes, so that every error Martin made when straight onto tape.

It was in 1970, just as The Dingaling Sisters were formed, that a regular stable of comics was developed for The Dean Martin Show to help with its skits. Among the comics who regularly appeared on the series were Charles Nelson Reilly, Dom DeLuise, Nipsey Russell, Rodney Dangerfield, and others.

As hard as it is to believe today, The Dean Martin Show was for a time controversial. As the Sixties became the Seventies, the show increasingly became the target of feminists, who felt that the series promoted attitudes which objectified women. Garrison and Hale toned down many of the more sexist comments. Unfortunately, it was about that time that the ratings began to fall.

It was then in the fall of 1973 that The Dean Martin Show moved from the Thursday night timeslot it had held for its entire history to Friday nights. It also marked a major change in its format. Retitled The Dean Martin Comedy Hour, the show now featured a nearly half hour long "roast" segment patterned after the Friar's Club roasts, in which famous celebrities were roasted. A greater emphasis was placed on skits and a new country music segment was introduced. It was to no avail. The ratings did not improve. After nine years The Dean Martin Show was coming to an end. The roast segments had proven popular enough that they would be spun off into a series of specials, The Dean Martin Celebrity Roast, which would continue until 1974.

Today it is easy to take The Dean Martin Show for granted as another celebrity show. It must be kept in mind, however, that in 1965 Dean Martin was a major star. He had a extraordinarily successful recording career, so much so that his hit "Everybody Loves Somebody" actually knocked The Beatles' "A Hard Day's Night" out of the top spot on the American music charts. As an actor he had appeared in such films as Rio Bravo, Toys in the Attic, and What a Way to Go. As a both a successful movie star and recording star, Martin was then able to attract top flight talent. Many big name guests appeared on the show over the years. Cyd Charisse, Bing Crosby, Van Johnson, Gene Kelly, Donald O'Connor, Mickey Rooney, John Wayne, and Orson Welles all appeared on the show, many of them multiple times. As might be expected, fellow Rat Packers also appeared on the show, including Frank Sinatra, Joey Bishop, and Angie Dickinson.

The Dean Martin Show is part of my fondest childhood memories as one of those shows my family watched regularly. It formed part of our Thursday night ritual. Dad would cook popcorn (in a skillet--this was in the days before microwave ovens were common and he apparently did not believe in Jiffy Pop) and we would settle down to watch The Dean Martin Show. While I know that much of the humour must have went over my head, I did find the show very funny as a child. And even though my tastes ran to The Beatles, The Who, and The Monkees (that much has not changed), even then I enjoyed Dean Martin's singing. He was the first crooner and the first member of the Rat Pack of whom I became a fan. I watched the show until the very end, even though I thought in the final seasons that the roasts took something away from the show has it had been.

Apparently I was not alone in my love of The Dean Martin Show. Other big stars had tried their hands at variety shows before Dean Martin. Judy Garland had made a failed attempt at a variety show. Fellow Rat Packer had tried no less than twice. Dean Martin succeeded. And it must be kept in mind that for the nine years that The Dean Martin Show aired, he continued to appear in movies and in nightclubs, and he continued to record. In the end he proved to be one of the few major stars who actually produced a lasting, classic, television, variety show.
Scribbled by Mercurie at 10:02 PM
Posted by dino martin peters at 7:44 AM

Hey pallie, great great post. I've learnt a very big bunch of interesting things I didn't know. Thanks for holding it and showing on your excellent Dinoblog :-)

A few months ago I published a modest post with two cool videos on The Dean Martin Show. Beautiful.

Hey pallie, likes we tries to provide a first class Dinoeducation for all pallies to grow in their Dinoknowledge...glads this post dida just that for ya....thanks for the link...even the most "modest" of Dinoposts helps spread the Dinomessage and bring others to know, love, and honor our Dino...thanks for doin' your Dinowork..keeps it up pallie!