Hey pallies, likes diggs this, a youngen chick tagged Nick over at a pad tagged Agony Booth has created a six part Dinofeature doin' a stellar job of recappin' "The Ambushers," Dinoflick numero 3 in the Matt Helm quartet of spy capers. To checks this out in it's original format, just clicks on the tagg of this Dinogram.

Will be postin' all 6 count 'em 6 parts of this Dinoseries, but for now sits back and enjoys part one.... I loves seein' today's youth liftin' up the name of our Dino and honorin' him in such a profound Dinoway! Dinodelightedly, DMP

lHere it is...my first promised recap. Yes, it's an old movie and yes it isn't a sci-fi or fantasy stinker but I hope you enjoy it nonetheless. It's by no means an obscure movie; it has an A list star in the lead and was very popular in its day. It probably turned a greater profit at the box office than a lot of offical recapped movies here so without further ado... 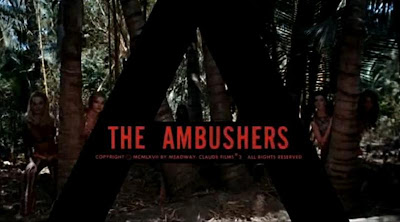 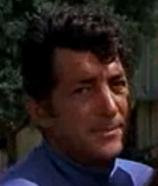 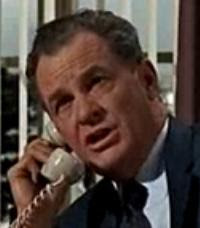 McDONALD (James Gregory). Head of ICE and Matt Helm's boss. Sends his agents on pointless errands that eats up Federal money like there's no tomorrow. Also sounds drunker than Dean Martin, which is saying something. 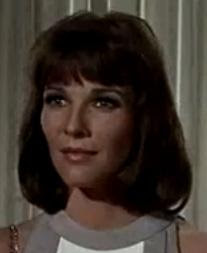 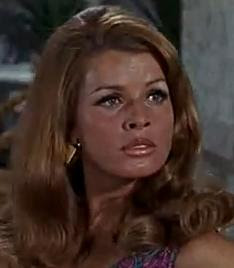 FRANCESCA MADIEROS (Senta Berger). The other reason to watch this movie. She's a sultry femme fatale who has unfortunately overdone things at the tanning parlour. 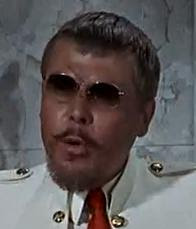 JOSE ORTEGA/CASELIUS (Albert Salmi). This movie's attempt at a Bond villain played by Petrocelli's sidekick. His ruthlessness and deviousness is let down by his hiring of the worst security force in movie villain history. I keep telling them, it's alright to pump money into volcano hideouts, death rays and bathysubs but cutting back on hired goons is a false economy...

The trouble with success is that everyone tries to copy you and tap into whatever it was that made you successful. And back in the 1960s everyone wanted to tap into James Bond. Looking back at 60s TV and movies you’d think the only jobs available to men were advertising executive, astronaut and spy; and it was the latter carreer choice that spawned 1001 James Bond imitations.

Some were excellent; like the Michael Caine Harry Palmer movies. Some were fun, like The Man From UNCLE, some were ludicrous but got away with it because the cast seemed to be having fun like James Coburn in the two Derek Flint movies. And some were made in Japan and got dubbed over by Woody Allen. But one 60s spy franchise held its own against 007 with 4 movies being made in 5 years, although for the life of me I can’t think why. Ladies and gentlemen, I give you Dean Martin as Matt Helm.

Matt Helm began as a series of gritty, realistic and well plotted spy novels written by Donald Hamilton. In them Helm is tough, analytical, methodical, ruthless and highly competant despite being described as getting on in years and out of condition. For the Matt Helm movies, the producers decided to junk the first 5 character traits and focus on the last 2. And once they’d settled on that, they found their perfect Helm in Dean Martin...although I think that’s probably a co-incidence.

The Matt Helm movies, starting with The Silencers and ending with The Wrecking Crew, tried to out-Bond the Bond movies on a fraction of the budget. They couldn’t compete with large set piece action scenes so instead they crammed the Helm movies with stuff and pretty girls and hoped that would compensate. Bond may have had 2 or 3 gadgets per movie but Helm would have 4 or 6 ordinary looking items from WalMart which would just explode in an Irwin Allen Lost In Space kind of way. And if Bond had one or two sexual encounters, Helm would get jiggy every 10 minutes just to up the ante. In short, a Matt Helm film is about cramming in a lot of cheap tat in its 90 minutes of running time. Even by drug fuelled 60s standards, the Matt Helm movies are pretty ropey but they did well at the box office, for some reason no one can fathom (although I have one theory which I will explain later), and a 5th one was planned and was only stopped because Dean Martin felt too bummed out about the death of his co-star in The Wrecking Crew, Sharon Tate, to continue.

But before we move on to The Ambushers, a word about the star: Dean Martin. We all know his silky smooth style and his love of booze? We do? Good. Because that’s about the alpha and omega of his performances in them. The Silencers has great fun with sending up that image and the next movie Murderer’s Row, actually has some decent action in it to keep Dino on his toes. By The Ambushers, he’s totally paralytic and it shows throughout. He can’t say a line without slurring it or forgetting what comes next and his reaction times are slower than a geological age. And then there’s the sleaze: The central conceit of this movie is that if you’re a middle aged man, pushing 50, permanently sozzled and in desperate need of a cigarette then, natch, you are the greatest gift to womankind ever. Women just barely old enough to sign a consent form just throw themselves at Dean Martin and that is just the way the world works in this movie. After watching The Ambushers, you can’t help feel that Mike Myers wasted everyone’s time with the Austin Powers movies because they are so tame compared with the Helm originals. So a bit of suspension of disbelief is required about the sexual prowess of its leading man...and the plot, the villains, and just about everything that goes on from the opening titles to the blessed relief of THE END.
Posted by dino martin peters at 7:21 AM