"Regardless, Dean Martin's Christmas music is required listening for all hipster geeks - bottoms up!"

Hey pallies, likes our Dino directed me to this way cool winter music pad appropriately tagged "Hip Christmas." And, likes of course our Dino is well represented here. Almost all of the various incarnations of Dino-winter-tunes are spoken of here...with the superior nod, as would be expected, given to Dino's first and greatest winter effort, "A Winter Romance."

I loves how the dude Mr. Randall Anthony wrote this Dino-prose that sets the tone when they sez......

"Dean Martin's Christmas music is satisfying in ways that his arguably more talented peers (including Frank Sinatra, Nat "King" Cole, and Johnny Mathis) did not manage to achieve. Why? Unlike those legendary crooners - who grew generally stuffy on their respective holiday platters - Dino got loose (pun intended)."

Now likes I can't agree with Mr. Anthony that our Dino has "more talented peers"...and if I coulda speaks directly with Randy I woulda no doubt have a lively Dino-discussion with him. But, obviously Randall Anthony loves winter music and he loves our Dino. To view this in it's original format, likes just clicks on the tagg of this Dino-prose.

ilovedinomartin thanks Mr. Randall Anthony and his hip winter music pad for spreadin' some Dino-cheer in this way and helpin' others to come to know, love, and honor our beloved Dino. Dino-sharin', DMP 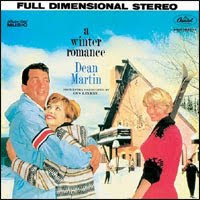 Making Spirits Bright compiles seasonal recordings from 1953 to 1966, including some rare singles and selections from two Christmas albums for two different labels: A Winter Romance (Capitol, 1959) and The Dean Martin Christmas Album (Reprise, 1966). A Winter Romance (repackaged in 1965 as Holiday Cheer) is far the better of the two, a typically suave, sexy Martin LP - though it's as much a concept album about winter as a traditional Christmas album. Rather than blathering on about Santa and Frosty, most of the songs revolve, literally, around romance in winter - c.f. "Baby It's Cold Outside" and "I've Got My Love To Keep Me Warm." Rudolph, however, eventually pokes his red nose in.... 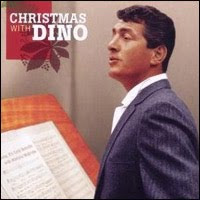 A Winter Romance has been reissued on CD twice (more counting imported versions). The first version - a 1994 reissue by Capitol - contains one bonus track, Martin's smokey chestnut "The Christmas Blues" (1953). The second version - part of a restoration of Martin's catalog by Collector's Choice - is superior in most ways, including the comparatively hefty four bonus tracks. But, none of those tracks are Christmas songs - meaning, obviously, that none of them are "The Christmas Blues." Too bad.

The Dean Martin Christmas Album was recorded after Dino switched to Reprise, a label founded by his Rat Pack peers. But, by the mid-60's Martin was moving rapidly towards the middle of the road like most old school vocalists. So, unlike A Winter Romance, Christmas Album is a traditional holiday offering - that is, it's a deadly dull affair with little to recommend it beyond Dino's customary croon. Though never reissued verbatim on CD, most of the contents are found on Making Spirits Bright. 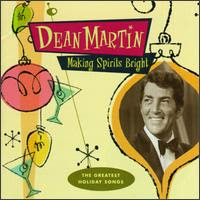 Which is to say, A Winter Romance is the jewel here - in no small part because it contains Martin's most celebrated holiday song, his ribald rendition of "Let It Snow! Let It Snow! Let It Snow!" Pay close attention: nowhere in the lyrics of that celebrated Christmas standard is Christmas ever mentioned. Hence, it was a natural for inclusion on A Winter Romance. Without breaking a sweat, Dino lays down the definitive version of "Let It Snow," knowingly leering his way through lines like "I've brought me some corn for popping." Ahem...

Happily, "Let It Snow" is included twice on Making Spirits Bright - in both the irresistible, original 1959 version and a rare, rockin' 1966 reprise. But sadly, Making Spirits Bright has been deleted, though it's widely available on the second-hand market. No matter, because a very similar package, Christmas With Dino, was issued in 2004 (with yet another variation popping up in 2006). Christmas With Dino expands the former album's track count by two tippling songs and has been remastered - so it's arguably the superior purchase. Regardless, Dean Martin's Christmas music is required listening for all hipster geeks - bottoms up!

Our Dino's Christmas music is the best of the Season!

Not in his discography is this little known compilation 45 RPM on the Victory label from the early 1950s. Dino sings "Walking My Baby Back Home" It was originally on an Apollo 78 RPM but was put on the 45 in the 1950s Could this be his first 45 RPM issued?

Hey pallie, thanks ever so much for checkin' in dude, and what a great great Dino-quire...I will consult with 'nother Dino-associate to see if they might know the answer to your Dino-quiry...keeps lovin' our Dino!