This Month In Dino-history: December 1969 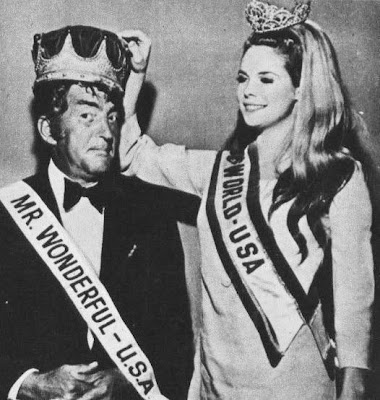 Hey pallies, likes you just never know what new Dino-detail you are goin' to learn. Never knew that it was in December of 1969 that the public announcement of our Dino cuttin' the strings with the Jeanne was made.

From the on-line presence of the McCook Daily Gazette, McCook Nebraska, from the newsy report "Days Gone By" by Walt Sehnert comes this historical Dino-report from December 1969 that our great man was breakin' his marriage to wife numero duo.

Seems some pallie brought in a December '69 edition of the McCook newspaper to it's office and one of the featured mentions was the break up of our Dino and the Jeanne.

Betcha this news made the front pages of every small town gazette and big city rag all over the Dino-univere once the Dino-news broke.

Likes you ask, why the cool pix of our Dino as Mr. Wonderful-USA with Miss Gail Renshaw Miss World-USA? Wells pallies, it was likes after our Dino met Miss Gail in 'Vegas and agreed to do a bit of publicity with her, that our Dino made his decision to calls it splits-ville with mother Jeanne. In fact our Dino and Miss Gail were such an item that Miss Gail eventually gave up her throne to devote all her attentions to our Dino. For some unknown reasons the amore between our beloved Dino and Miss Gail ended and our Dino went on to marry Miss Cathy Hawn.

I finds it very interestin' that it was durin' Dino-winter-month that our Dino and the Jeanne made their divorce plans known....and I do believe that it actually was on the next Valentine's Day that our great man had the offical divorce papers served on the Jeanne.

We thanks Mr. Walt Sehnert and the pallies at the McCook Daily Gazette for sharin' this piece of important Dino-history with us. To view this in it's original format, likes just clicks on the tagg of this Dino-gram. Dino-learnin', DMP

People sometimes ask us if we remember a certain time, a certain date, or a certain happening. For those of us who often have difficulty remembering what we had for breakfast it helps when we are handed the newspaper, which reported the incident. Recently a loyal reader brought a copy of the McCook Gazette, December of 1969. Though things continue to change, some things remain the same.

Dean Martin, 52, a $5 million/year TV star, sought a divorce from his second wife, Jeannie, 47, who agreed to comply with his wishes. It seemed that Martin, who portrayed a slightly tipsy, good time party boy on television, was in reality a stay-at-home, early-to-bed teetotaler, while his wife was the one who enjoyed an occasional party. The couple had three children. Martin had four children by a previous marriage.
Posted by dino martin peters at 2:33 PM