Hey pallies, on this 14th day of Dino-winter-month we comes again to the art pad ETSY and 'nother Dino-impression. Loves likes how so so many artists have chosen our beloved Dino as the subject of their creativity. Today's artist is a chick tagged Marilyn and you can read below why she has chosen to paint our Dino in oils.

For those who are still doin' some Dino-shoppin' this Dino-portrait might just be right for one of those Dino-holics on your list. To view this in it's original format, and to purchase a copy of the Dino-original, just clicks on the tagg of this Dino-gram. Dino-diggin', DMP 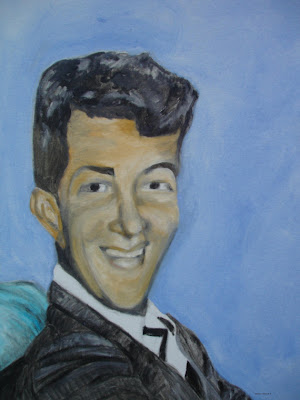 I decided to paint Dean Martin because he was one of the most talented personalities in show business history. He was a singer, comedian, movie star, and TV personality.

Martin first gained stardom when he teamed up with Jerry Lewis in the 1940s. His solo career produced a long list of hit songs including “That’s Amore”, “Everybody Loves Somebody”, and “Volare”. He also had an extensive movie career, starring in more than 50 films. Dino’s career grew even more when he teamed up with Frank Sinatra to form the legendary Rat Pack. By the mid ‘60s Martin was a top movie, recording and nightclub attraction. Martin later moved to television with “The Dean Martin Show” and his celebrity roasts, which I loved.

Thanks for shopping Art By Marilyn. Please come again.
Posted by dino martin peters at 4:53 PM