Hey pallies, likes as promised, here is part duo of the Biography of our Dino from the returned "deanmartin.it" pad. I thinks our Dino woulda particularly loves this second halp...'specially 'cause some of the google translatin' from Italiano to English is so so funny.....likes 'specially loves all the patter on learnin' to spell "apple."

So digs in pallies, for a dose of delightful Dino-learnin'! ilovedinomartin sez thanks to "deanmartin.it" for these fabulous Dino-reflections. As usual, just clicks on the tagg of this Dino-patter to goes to the fab "deanmartin.it" pad. Dino-devotedly, DMP 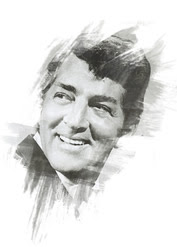 - Until the age of five years said later - spoke only Italian, but my Italian is not even a dialect of Abruzzi, and I also speak evil. The rest do not even speak good English.

Dino continues to grow. He started school but was not really his forte.
He knew, however, behave and be appreciated. It was nice, she always managed to do everything, and then as her teacher would say:
- He was polite and beautiful. If Jesus was a good kid .... Riccio did not study much and nice, but it was so respectful ...

Dino had other things to think that learning to spell. The first impact was terrible with the word "Apple." Mistakes in writing. Her father called her apple, her teacher "Apple", but sometimes his father called and came out as a "APPLA" that no one knew what it was. But eat it all. Even without knowing how to write. Even the brothers who sold them could write Antonucci. And even the peasants who cultivated the ... And he thought: Can you grow it, sell it to eat it, but it is not necessary that you can write her name. 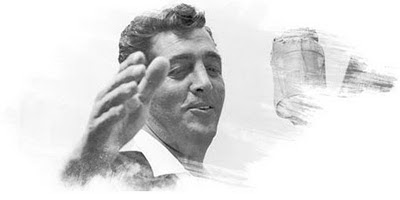 When the sisters began to speak to the Catechism of Adam and Eve and original sin, which he understood was that damn apple to give away the whole story ... He understood that the spelling in the apple was a sin.God told him to eat whatever they wanted, except that damn apple tree of knowledge. This is the first of all evils: the knowledge! For those stupid enough to eat and not enough?

No, I wanted to know, they wanted to be able to write what they ate and that was the damnation! Damn the application and knowledge!

Already as a boy his vocation was the show. when he was at home she always wore a hat. He went around with his hat on singing and dancing.

Childhood and adolescence were spent in the most peaceful way. You could tell that he was Italian, he knew gain respect. At the age of 12-13 years could also use his fists against the oppression of the small neighborhood thugs. But at the same time he was considerate to everyone.

- He was a loyal and generous guy - he says his old classmate Mavrotis - unlike the others always had a few pennies in their pockets and willingly offered an ice cream or candy to his friends. If he had a penny shares it with everyone.

At 16 he left school and became famous when often told:
- I left school to follow the music.
The phrase sounded good and began to believe it too.

After school he tried to work hard as the first gas station and then was hired as a boxer. His name was Kid crocheting. But the success did not last long. Many years later he recalled joking stedso: - I had a boxer's career also ensured. Take $ 10 per contest. I supported 12 matches and won them all ... except the last 11 ...

But one day he stopped arrangiardsi and began working at the Rex, the most beautiful and largest casino in the area. He became a dealer's good, damn good. There did not use chips, but only silver dollars. And in utter confusion, as a consummate magician also slipped a few dollars in their moccasins wide ...

In the meantime, did know his voice at the tables, among our friends and customers and sometimes when the orchestra leader allowed it began to sing, occasionally, Italian songs, right in the casino. "Ohi Mari 'or the success of Bing Crosby, who imitated until he found he had a personal voice as warm and charming.

Then began to check off items that would become legendary in the years to come. "Spaghetti Boys" of Italian origin, among others, a certain Frank Sinatra, Peter Como, and although not sing, but all helped to emerge known as Lou Costello Costello Abbott and Costello's famous couple.

Dino Crocetti, son of a barber shop in Abruzzo, born under the gray sky like steel, was destined to become a star of the same sky. He did what he could do no other disks, film, radio and television programs. And he, like few others would have discovered and named the mundane: "The dirty dream factory."
Posted by dino martin peters at 7:30 AM