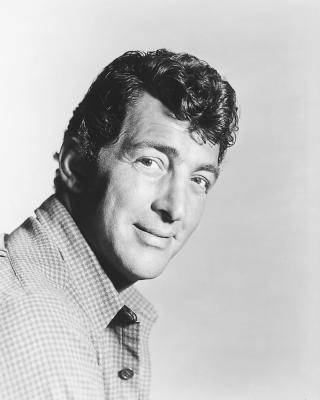 Hey pallies, was just doin' some Dino-searchin' of blogs and likes came across this Dino-remembrance at a pad tagg "Ask Mr. Pop History." This is quite nicely written and includes some Dino-details that are new to this Dino-holic.

It is always so special to find others honorin' our beloved Dino and spreadin' some Dino-love 'round. So, ilovedinomartin sez our thanks to the blogger of "Ask Mr. Pop History" for doin' their part to help the Dino-light continue to glow and grow. TO view this in it's original format, just clicks on the tagg of this Dino-post. Dino-learnin' and Dino-growin', DMP

Passing – singer/actor Dean Martin (Dino Paul Crocetti) (78) dies at his Beverly Hills Home of acute respiratory failure. Known as the “chief-deputy” to the chairman of the board in Sinatra’s “Rat Pack,” Martin started out as a solo singer in records and radio. (He did a 15-minute late-afternoon show on WMCA in NewYork City in the late 40′s.) Teaming up with Jerry Lewis, the pair was unstoppable in movies and as a night-club act from 1946-1956. As a solo artist,Martin scored on the charts during this period with huge hits on Capitol Records -hits like “Return To Me,” “That’s Amore,” “Memories Are Made of This” and “Volare.” After the pair split up in 1956, Martin continued his recording and movie career, often appearing in dramas such as “The Young Lions” in 1958, “Some Came Running” in 1959 and “Rio Bravo” in 1959. The late 50′s and early 60′s saw Martin team with Frank Sinatra, Sammy Davis Jr., Peter Lawford and Joey Bishop for several movies and nightclub appearances (esp in Las Vegas) as “The Rat Pack.” In the middle of the Rock n Roll British invasion – he scored a #1 record with “Everybody Loves Somebody Sometime” and other top-10 records during the mid-60′s “The Dean Martin” variety show, was one of the top television shows through the 60′s and into the 70′s.

Some Dean Martin quotes through the years- “Two of the greatest turnin’ points in my career were, first, meetin’ Jerry Lewis. Second, leaving Jerry Lewis. I became a real actor because of these two things.” About acting – “And if any actor tells you it’s tough, tell ‘em they ‘re full of beans … To become half a success in what you do, you have to enjoy it or else you become a griper. The good Lord gave me a talent and I’ll use it until I run dry.” “I like people. I love what I am doing and I think people can tell that. You know more men want to see me than girls. You know why? I never sing to the girl. I figure that some guy is paying the bill and here I am singing to his girl, then he’s gong to get threatened. I don’t flirt with the girls like Wayne Newton does. I sing over their heads”

Martin’s second wife – onetime Orange Bowl queen Jeanne Beigger – “I married him knowing nothing about him. I divorced him 23 years later and I still know nothing about him.” Condolences – Frank Sinatra – “Dean was my brother -not through blood but through choice. Our friendship has traveled down many roads over many years and there will always be a special place in my heart and soul for Dean. He has been like the air I breathe, always there, always close by.” Jerry Lewis, according to his manager Joe Stabile is “completely shattered and grief stricken.”

Said comedian Alan King: “I am going to have a drink right now for him. Goodbye Dino – Jerry Lewis, closing his tribute to his longtime partner said – “Rest well and don’t forget to short-sheet my bed when I get there.” Also paying tributes to the superstar at his funeral – Shirley MacLaine andRosemary Clooney. Other attendees included Barbara Sinatra (Frank couldn’t make it and was said to be too overwrought to attend), Angie Dickinson, Don Rickles, Bob Newhart, Robert Stack, Tony Danza, Edie Adams and Cyd Charisse. Las Vegas hotels including the Sands, Stardust and Flamingo dimmed their lights on Thursday evening for 10 minutes, in Martin’s memory.
Posted by dino martin peters at 2:59 PM

Some of the info is new to me, too.

Hey pallies, don't you just loves it when you gets to experience new Dino-details...our Dino is so so good to his true pallies, lettin' us in on more and more of our beloved Dino's legacy...his life, his times, his teachin's...have a swingin' Dino-eve with Mr. AOW ma'am and look forward to more Dino-patterin' with you, Miss AOW, in the new Dino-year.....