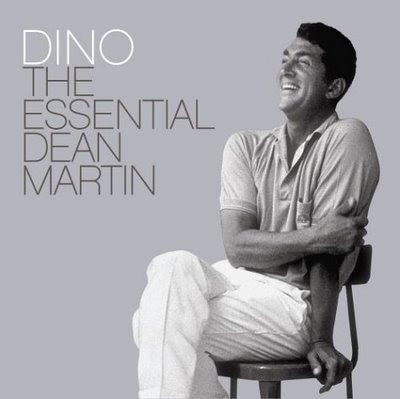 Hey pallies, likes we says our thanks to our pallie Mark over at the popculturefanboy pad for sharin' this excitin' piece of Dino-history with us this very Dino-day.

It was on June 1, 2004 that EMI Capitol released the amazin' Dino-collection, "DINO: The Essential Dean Martin. It was Billboard's "Hotshot Debut" and was the week's highest-charting new entry, and has sold more briskly than any previous Martin recording, going gold within months and to platinum status within a year. It also hit the Top 5 on Apple's iTunes Music Store album chart.

This al-b-um introduced our Dino to new a new generation and has made Dino-holics of many of today's youthful mods. Dino is more popular then ever and this awesome al-b-um has done much to keep the Dino-legacy glowin' and growin'!!!! To read this in it's original format, just click on the tagg of this Dino-post. Dino-rememberin', DMP

even tho i lsitened to dino as a kid on the radio - i never actually owned an al-b-um of his. This was the first one i bought and it definitely made a dino-holic out of me!

Hey pallie, thanks for sharin' that personal Dino-testimony...loves it Miss Lisa...and likes I hopes the purchase of this Dino al-b-um encouraged you to gets more Dino-treasure as well....

that would be an understatement :) - working my way past 30 albums and almost all his movies....

Hey pallie, well Miss Lisa, thanks just what I thought....once you gets addicted to our Dino...you just craves more and more of our great man...ones can likes never ever gets 'nough of our beloved Dino....

it was my first Dino cd too and probably the only album where every single song is great! lol i remember when i put it on my ipod and thought having 30 songs of one artist was alot, now i have that literally times ten..and counting of Dean alone..so far ive seen 42 of his movies just gotta find the rest of em then ima get me a job n buy em..all :)

Hey pallie, well Miss Catie, thanks for sharin' your Dino-testimony...likes as I sez before....so refreshin' to find someone so young in Dino who shows such Dino-true and Dino-pure Dino-adulation!!!! Keeps lovin' our Dino.....