Hey pallies, likes how Dino-rad is this....from our pallies at LIFE comes this cool trib to the "Sexiest Dads of Yesteryear." The entry for our Dino is of our great man and his boypallies Dino Jr. and Ricci.

Our Dino's namesake is flexin' his muscles, while our Dino shows such such encouragement to his beloved boypallie with Ricci in awe of the bondin' bein' shown between the father Martin and boypallie Martin Jr.

To view this in it's original format, likes just clicks on the tagg of this Dino-gram. Thanks to our pallies at LIFE for sharin' the sexiest daddy-o there ever was hangin' out with two of his prodigy. Dino-diggin', DMP 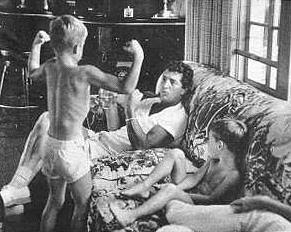 Dino compares muscles with one of his sons in 1958, as another looks on. The Rat Packer was a father of eight -- ain't that a kick in the head?
Posted by dino martin peters at 7:31 AM

Those kids were lucky growing up with Dino as Dad.