BTW. pallies, as Dino-usual, just clicks on the tagg of this Dino-gram to read this Dino-prose in it's original format...and checks out the link in the article to goes to Mr. Iannandrea's pad. Dino-devotedly, DMP 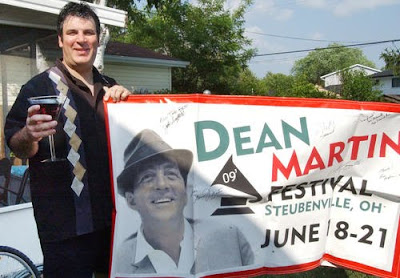 David Iannandrea, who won first place in a Dean Martin singing competition, will be performing during the Variety Nites by the Canal concert series on Wednesday at Merritt Park.


Winning first place was great, but it wasn't the biggest thrill David Iannandrea had last weekend.


For Iannandrea, the highlight of the two-day event held in Martin's hometown was a chance to sing for the late singer's daughter, Deana Martin, who regularly attends the festival.

"The look on Deana's face when she got to hear me sing live there -- it was just priceless. Her eyes were wide open.

"It was kind of a cool thing to be able to sing for the daughter of Dean Martin."

Iannandrea said he started his singing career as an Elvis Presley impersonator. But three or four years ago, after being told he sounded more like Martin than Presley -- even when he was singing Presley songs -- he decided to change acts.

"People kept saying, 'David, you sound like Dino.' I thought they were just saying it to be nice.

"It took me a long time to finally break down and buy a tuxedo and do the tribute. Dino was the coolest guy. I don't like copying anyone to be honest, but I had so many people tell me, 'I close my eyes and it's like Dean's in the room.'"

Even when singing country songs, people tell him he sounds like Martin -- "So what am I suppose to do?

"It's really cool. I don't even have to try to sound like him."
Posted by dino martin peters at 7:03 AM