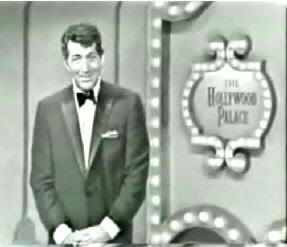 Hey pallies, thanks to the "digtriad.com" pad (clicks on tagg of this Dino-gram to goes there) we learns that on this very day in Dino-history 1964, our Dino while hostin' The Hollywood Palace made his historical hysterical intro of The Rolling Stones.

The Stones performance was quite unmemorable, but our Dino's words of intro will continued to be remembered through out all time. Sez our beloved Dino...

"Now.....somethin' for the youngsters. Five singin' boys from England who sold a lot of al-b-ums. Albums. They're called the Rollin' Stones. I'VE BEEN ROLLED WHEN I WAS STONED MYSELF. So, I don't know what they're singin''bout, but there they are at."

History records that the Stones were likes totally distraught by our Dino's makin' fun of 'em....our Dino....didn't faze him a bit...after all he was just bein' Dino...and likes what coulda be cooler then that?!??!?!

On June third, 1964, the Rolling Stones made their US TV debut on "Hollywood Palace" hosted by Dean Martin.
Posted by dino martin peters at 7:07 AM

hysterical! and loved dino's eye rolling when, after they sang their song, he said "aren't they great?" - it was easy to see he was not impressed - lol!

Hey pallie, yeah....I loves our Dino's way of makin' fun of everythin' and anythin'....even his self....knows the Stones were really up set with our beloved Dino....but, did our Dino give a you-know-what? NEVER....that our King of Cool....truly only Dino matters.....

someone told me Keith Richards (the guitarist) kinda threatened/shoved Dean with the guitar backstage or something..Anyone know if thats true? (Dean coulda kicked all their...behinds..anyway) I always luved this clip cuz Deans hilarious and i like the stones too..but Stones fans are such babies about it.i know Dean wouldnt have cared but some of the comments on youtube get me mad as...anything

Our Dino's judgment was correct on this cacophony.

Off topic but worth looking at. Maybe you've already seen it.

Hey pallie, ya Miss AOW you are so right 'bout our Dino's judgement...but thens likes when was our Dino ever wrong?

Hey pallie, likes Miss W if it is likes 'bout our Dino thens likes it is never ever off topic...thanks for sharin' the link...just may have to use that as part of the Dino-birthday celebration 'rounds these Dino-parts on our great man's great day.....

Hey pallie, likes ya knows this Dino-holic so very very Dino-well....and as our Dino always sez...keeps those cards and letters comin' in....