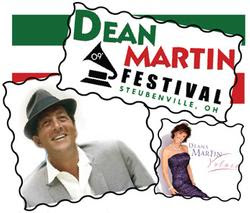 Hey pallies, likes as promised, here is our pallie's noebie's patter 'bout Dino-fest at his stellar blog, "The Comedic Genius Of Martin And Lewis." Gotta 'fess up that I wasn't able to gets the vid there copied here...but you can either clicks on the tagg of this Dino-gram to goes directly to noebie's post or copy the link posted where the vid is 'sposed to be and go directly to noebie's flickr vid page to view it there.

You will note that noebie has also included links to his page of Dino-pixs from the fest and well as comments at his twitter pad...I've yet to checks that out. So, again thanks pallie noebie for sharin' with the Dino-world your Dino-adventures in Dino-ville for the 2010 fest in honor of our beloved Dino! In our Dino, DMP

We're enjoying a wonderful time in Steubenville at the annual Dean Martin Festival. You'll find occasional (almost) real time reports over on Twitter, and my most recent uploads of pictures and videos on this Flickr set.

I'll also be putting together a podcast episode in a week or so with a full recap and some audio from various events here. In the meantime, enjoy this short video from Deana Martin's book signing this afternoon. She is gracious, beautiful and (like her father) a natural wit.