Hey pallies, as promised, here is the second half of our pallie Miss AOW's show and tell of her Dino-pilgrimage to Dino-ville with Mr. AOW for Dino-fest 2007. So kind of Miss AOW to let us share her Dino-tripin' with all us pallies here at ilovedinomartin.

Thanks Miss AOW for lovin' our Dino and sharin' your Dino-devotion with all us dudes here at ilovedinomartin. And, again, I share with all you pallies Miss AOW's request to pass on to you....." I'd appreciate a mention of the fact that I'm primarily a political blotter at http://alwaysonwatch2.blogspot.com/ , but take frequent breaks from politics to keep up with nostalgia about our Dino. Oh, for the good ol' days of Dino!"

ilovedinomartin tries it's best to say a-politico, but knows that some of you pallies musta have a leanin' toward this sorta bloggin'...so likes please check's out Miss AOW's action. And, as usual, to view Miss AOW's Dino-presentation at her "AOW's Photos," just click on the tagg of this Dino-post. Dino-sharin', DMP


Next to the sign which marks the site of Dean Martin's birthplace stands a duplex. When I was in Steubenville in 2002 for Dean Martin Day, I met Francesca Monaco, who lived in one of these residences (the one on the right, I think).

Ms. Monaco saw me taking pictures of the site of Dean Martin's birthplace and came out her door, saying, "Are you a teacher? You walk like a teacher." We proceeded to converse for nearly a half hour. Ms. Monaco had been Dean Martin's teacher when he was in 10th grade! She was only a few years older than he; back in those days, when an aspiring teacher graduated from high school, in order to certify as a teacher, she didn't have to attend college, but only take a summer's worth of certification courses. I asked Ms. Monaco what kind of student Dean was, and she told me that he was quiet and intelligent, though he didn't apply himself in school.

Another interesting factoid I gleaned from Ms. Monaco, from a family of several girls: Dean's mother, a seamstress, made all her sisters' wedding dresses.

I have no idea if Ms. Monaco is still living, but the duplex where I met her is still standing: 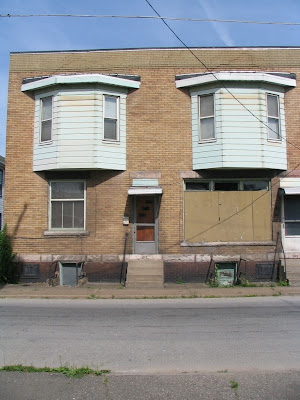 Francesca Monaco informed me that the Crocettis lived only a few years in the house in which Dean was born. She directed me to another house in a better part of town, further from the railroad track. In this house, Dean's father worked as a barber on the first floor, and the family lived upstairs. I'm not sure if the following picture is exactly the correct address, but even if not, the building looked like this: 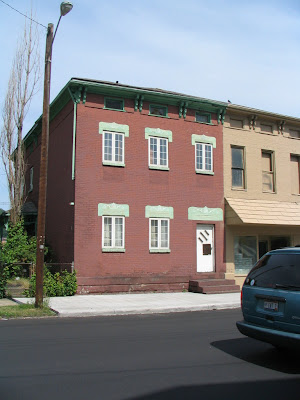 Sheer cliffs, showing lots of evidence of iron in the rust coloring, rise from the Ohio River on the West Virginia side: 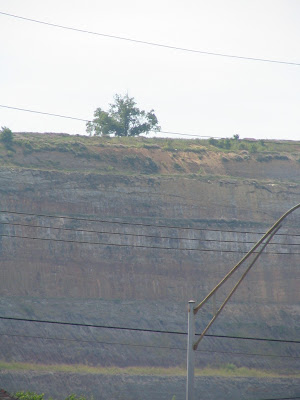 The iron in the geological formations led to the establishment of the steel-mill industry in Steubenville. In the background of this picture, you can see the railroad track for the trains and the smokestack from one of the steel mills. I took this picture not far from the site of the previous photo: 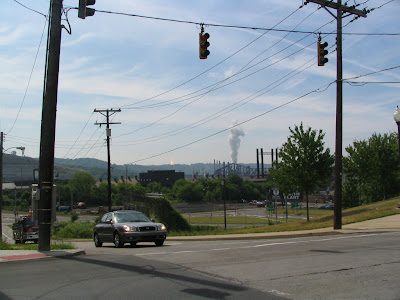 In addition to being Dean Martin's hometown, Steubenville is famous as "The City of Murals." Here are two of those murals: 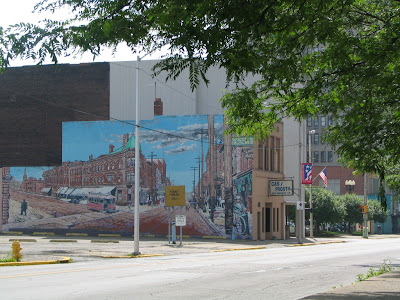 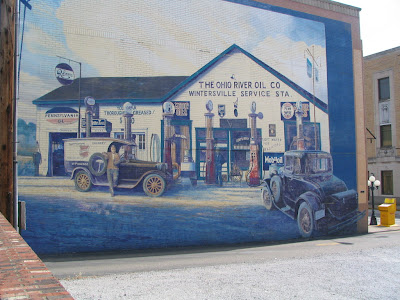 Oh, how I long to visit Steubenville again -- especially during Dean Martin Festival!

In my view, every Dino fan should make the pilgrimage. Steubenville is a great little town, with the best Italian food you've ever had at the Naples Spaghetti House. Read about the restaurant HERE. Excerpt:

Naples was opened in 1923 and is operated by the fourth generation of family members under a slogan of "Our family wants to serve your family." Currently, Delatore's daughter Lisa serves as the manager.

"Anybody that's anybody big has eaten here," the owner said.

Pictures of celebrities who have visited Naples line the walls. Delatore explained that when it first opened up, Dean Martin, Jerry Lewis and the Three Stooges were among those who stopped in at Naples.

Hey pallie, thanks Miss AOW...and how I so Dino-yearns to makes my first Dino-pilgrimage there myself....thanks for sharin' 'bout the Naples joint!