Hey pallies, likes our fellow Dino-holic Miss Catie likes has been paid a huge Dino-compliment by bein' featured at Examiner.com..the Milwaukee edition (clicks on tagg of this Dino-post to goes there). A huge fan of the frankie's Mr. Rick Busciglio has featured our Catie in his blog post "Meet Catie the Blogger and world's biggest Dean Martin fan ?"

Busciglio found his way to our Catie's Dino-blog via her post featured below 'bout who oughta play our Dino in the frankie bio by Scorsese. You will note that Catie features the notion first quired here 'bout the notion of neauveau hipster Ashton Kutcher bein' given the nod to play our beloved Dino.

Thanks Mr. Busciglio for sharin' our Catie's Dino-passion with the world and helpin' others to come to know, love, and gets hooked on our beloved Dino. Hats off to our Catie for her amazin' Dino-devotion! Dino-celebratin', DMP 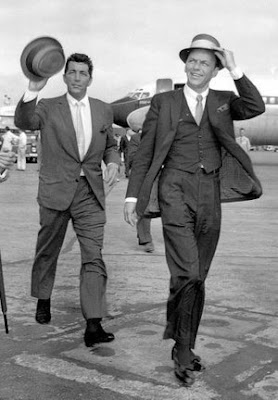 Catie, last name unknown, is a fellow blogger since March of this year. Per her meager profile, she is a major fan of Dean Martin....although she is a member of the younger generation.

Catie wrote this week about my favorite Frank Sinatra subject currently....the Martin Scorsese planned bio-picture of Frank. Here is an excerpt. Please click on the link belo to read her complete comments and to read her past contributions.

"I keep thinking about this Sinatra movie and all the casting rumors like De Niro to play Dean and Pacino to play Sinatra. If it were say 15-20 years ago i might think there would be no one better than Robert De Niro to play Sinatra but as great as he is hes in his sixties now, same with Pacino, who I don't think could play either one. Or Leonardo Di Caprio as Sinatra, hes great but No.

Then theres the worst one: Ashton Kutcher to play Dean. I got nothing against him but he's not..how should i say, Dean Martin worthy? I haven't really seen him as a serious actor so i wouldn't know how good he is but i highly doubt he could ever play Dean, ever.

Its a tough job cause really only Dean could play Dean, and the more someone tries to act like him or be him, the farther and farther away they get from being Dean. There'll never be someone who can play him perfectly like there was for Johnny Cash or Ray Charles because there can never be another Dean Martin and no one comes close.

If I were making a movie about Sinatra, I'd look for an unknown that can act well, of course, but Id also want to make sure they had a quality or two of Dean in real life so that somethings would just be natural in the role like someone nice, with his sense of humor or a old timey kind of a cool. Idk what Scorsese's lookin for but he's an awesome director and the best guy for the job so my fingers are crossed! "

You can read her blog at http://classicsbetter61.blogspot.com/2010/06/rat-pack-movie.html.
Posted by dino martin peters at 7:44 AM

Luv the title :) i try lol Thanks DMP i wouldnt have known if you didnt post it..finally theyre giving the chance a kid! jkjk have an awesome week

Hey pallie, well Miss Catie, I knews the best way to surprise ya was to post this here at ilovedinomartin....and indeed it is likes so so cool to have one of the ilovedinomartin crowd receive such a stellar Dino-honor....