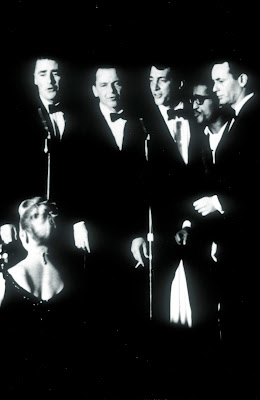 Hey pallies, likes I trust you are likes me when it comes to our most beloved Dino...you likes just can never ever gets 'nough Dino-details. And, likes one of the best ways I have found to be more and more in the Dino-know is to gets my hands on as many tomes 'bout our Dino and his pallies.

One such book that I have perused, but yet to fully endulge in readin' is Mr. Shawn Levy's classic "Rat Pack Confidential." Today's Dino-post is a review of said book by a chick tagged Ruth at her bookie blog, "Between the Pages." In describin' Levy's book Miss Ruth sez, "This book is a gossipy, lurid, but always readable account...." She describes our Dino as one "who, it seems fairly apparent, would kowtow to nobody," and compared to Frank, our Dino "came out of it a little better –at least he was his own man."

Looks like this woulda be one worth-while tome to investigate further pallies! ilovedinomartin sends our thanks to Miss Ruth for reviewin' this Rat Pack book and puttin' her readers on to the life and times of the Rat Pack. To view this in it's original format, as usual, just click on the title of this Dino-message. Dino-growin', DMP

This book is a gossipy, lurid, but always readable account of the rise and fall of the Rat Pack – Frank Sinatra, Dean Martin, Sammy Davis Jr, Peter Lawford and Joey Bishop. It charts how they came together in the first place (the name Rat Pack was given to them by Lauren Bacall, the wife of Humphrey Bogart, who Sinatra regarded as a hero), talks about their glory years when they seemed to rule the entertainment world from Las Vegas, and then the inevitable fall into, variously, drug abuse, alcoholism, bankruptcy and depression, leaving behind them a trail of broken marriages, broken hearts and more.

The book is not a biography of any of the Rat Pack members – their childhoods and very early careers are barely touched upon – and shouldn’t be read as such. Instead, it covers the most successful and most volatile parts of their various careers, including such things as Sinatra’s involvement with the Mob, and the Kennedys (and both together at some stages). Sinatra is the main focus of the book, with the others seeming to orbit around him – with the exception of Dean Martin, who, it seems fairly apparent, would kowtow to nobody.

Actually, despite the author’s obvious and understandable love for Sinatra’s singing, Frank does not come out of this account very well. He is shown to be domineering and paranoid, unpredicatable – apt to change his mood in a moment – and a womaniser, who had little respect for anybody other than those he feared. Dean Martin came out of it a little better – at least he was his own man. Sammy Davis Jr was probably the most interesting of all of the Rat Pack members, for me anyhow. The racism and abuse he had to deal with was shocking – while hotel and casino managers were happy to have him perform and entertain a crowd, they certainly were not about to let him mingle with that same crowd. The section about the eventual desegregation in Vegas was illuminating and very interesting. Sammy also seemed to be out of his depth in the Rat Pack – detested by white people because of the colour of his skin, and detested by black people for being friends with white men like Sinatra and Martin, he was caught between a rock and a hard place. Peter Lawford came across as a sad character – born to looks, charm and charisma, Frank spat him out after he believed that Peter had double crossed him, and it’s sad to see how such a beautiful man as Lawford ended up sinking into a haze of drugs and alcohol, which cost him his life. Joey Bishop was possibly the most enigmatic of the group – seemingly able to rib Frank without fear of reprisals, and remaining his own man as far as possible within the confines of such a group.

The Kennedys feature in the book – Frank was an ardent admirer of the family, and an overt campaigner for JFK when Kennedy was running for the democratic presidential nomination, and then the president. The family as a whole do not come over well(!) Also covered extensively was Frank’s connection with various gangsters – who were happy to use him, but clearly had little respect for him.

It was nice to read about a time when Las Vegas was a genuinely cool, sexy and glamorous place to be, unlike the commercial money making machine which it is these days; what a place it would have been to visit at the time!

The slang used in the book emulates the period covered, with mention of broads, dames and swells routinely peppered throughout the book. This may annoy some viewers, but I actually enjoyed it a lot. Overall I very much enjoyed the book, and it has whetted my apetite to find out more about the various Rat Pack members. 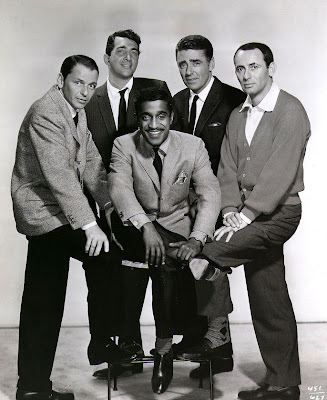