For me, Dean Martin is the voice of autumn/early winter.

Hey pallies, likes today's Dino-post hails from 'nother uniquely tagged blog, "The Heavy Petting Zoo - WSUM 91.7 FM." Doin' a bit of researchin' found that said radio station hails from Madison, Wisconsin where one of the chick staffers is certainly in the true Dino-know.

This unnamed Dino-holic shares her her testimony of her growin' devotion to our most beloved Dino...sharin' how she acquired her first Dino-al-bum, a compilation tagged, "That’s Amore: The Best of Dean Martin," It was the "Fall of 1998" and she proclaims that she "then listened to it non-stop all winter long." That's our Dino for ya pallies, one she gets started on the Dino-path, likes you gets so so Dino-hooked likes so so Dino-fast.

Likes it is always so so refreshin' to here each and every Dino-devotee's story of comin' to knowin', lovin', and honorin' our great man. So, ilovedinomartin salutes the WSUM 91.7 FM staffer who has shared her Dino-adulation with the readers of "The Heavy Petting Zoo." I'm sure your Dino-efforts will bring many more pallies likes into the Dino-fold! To view this in it's original format, likes just clicks on the tag of this Dino-message. Dino-sharin', DMP

Are there albums and artists that you have to listen to at a certain time of year? For me, Dean Martin is the voice of autumn/early winter. I can’t explain it other than to point to the fact that I bought my first Dean Martin CD in the Fall of 1998 and then listened to it non-stop all winter long. Now it’s just the thing to do in my world. 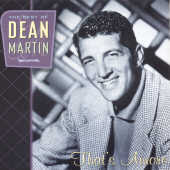 I handed him my copy of That’s Amore: The Best of Dean Martin — a.k.a. my “must have” album for that time of year. Dave shrugged and said, “Alright…” as he put it in the CD player. I think maybe three and a half tracks played before he dove for the “eject” button and it was the next person’s turn to select the playlist.

Sorry, Dave and friends. I tried to spare you…

But that’s not to say this album isn’t worth a listen. I’m just saying it may be best enjoyed on your own… or in any other context besides 6 hours into on a 14-hour road trip with others who much prefer the congested, speech impediment-laden stylings of The Decemberists.

What’s a “Best of Dean Martin” compilation without “That’s Amore” — arguably his biggest hit? If you’re tired of that song, do what I do and flip ahead to the next track or turn on the ‘random’ playback feature of your MP3 or CD player. Other familiar Dino songs you can expect hear include, “Volare,” “Sway,” “Return To Me,” and “Memories Are Made Of This” (a.k.a. the one that’s overplayed on AM radio).

There are hidden gems, too, which makes this album my favorite Dean Martin collection out of the three that I own.

Call me outlandish, but I think Dean Martin’s version of “Canadian Sunset” surpasses Andy Williams’ by leaps and bounds. It’s much more delicate, romantic, and embodies the sentiment that I imagine the lyricist (Norman Gimbel) intended to evoke when he wrote it (this is pure speculation; I haven’t done any research into Mr. Gimbel’s intentions). And the solo oboe lightly dancing around in the background is just adorable.

Another favorite is “If Love Is Good To Me.” Folks who wish to put on their dancing shoes can find this and other danceable numbers on Dean’s aptly-named album, Cha Cha de Amor.

The CD wraps up with the best version of “My One and Only Love” that I have ever heard. I mean, seriously. It beats out Sinatra, Johnny Hartman, and countless others who otherwise make you melt like butter. The arrangement features a flute theme that supports Dino’s melody line, an orchestral bridge that will sweep you away, and is ultimately held together by a small cadre of soft bongo beats in the backdrop.

Yes, it all sounds strange in writing, but you absolutely must take a listen to hear just how wonderfully this number comes together. Unlike with other songs, Dino doesn’t lay the schmaltz on too thick– his smooth vocal treatment and the arrangement’s instrumentation come together in perfect balance to create what I think is one of the most romantic songs of all time!

For some, Dean Martin is a “love him or hate him” kind of artist. I don’t know about that, but I can see how his style might be aggrevating to some. The relentless vibrato, the faux-Italianization of songs that should be left well enough alone, the mispronunciation of Italian words that were supposed to sound authentic in the first place — I’ll admit that his best work is comprised of songs that don’t possess these traits. But when considering the overall purview of his recording history, the good outweighs the not-so-impressive, in my opinion.

If you want to know ahead of time which tracks on this album you could probably skip or selectively choose not to buy (if you’re going the MP3 downloading route), either because they possess the lackluster qualities mentioned above or because they’d otherwise bore you… then I’ll tell ya:

That’s only five out of twenty tracks. I really think you’ll find the rest tolerable, if not downright enjoyable. Give it a spin and enjoy the warmth that Dino’s voice brings amid the autumn’s winter chill!

Final thoughts: This collection only scratches the surface of all that Dean Martin recorded. Just when I think I’ve heard it all, Paul Snyder winds up unearthing something new to me on his blog! Use That’s Amore: The Best of Dean Martin as a primer and keep exploring more of Dino’s work when you’re ready to give your music collection another boost.
Posted by dino martin peters at 7:04 AM

Spot on! The first time I heard that recording, I thought I'd swoon!

I do disagree with the writer about "Hey Brother, Pour the Wine" and "Standing On the Corner," though. I happen to love those two songs, and nobody but nobody can sing them as well as our Dino did.

Hey pallie, likes as always Miss AOW, it is such a pleasure to hear your Dino-perspective...and likes of course, I am in total total Dino-agreement...whatever song our Dino sings...likes he sings it better then anyone else...keeps lovin' our Dino!

Hey brother pour the wine is one of Dinos best songs, i known that one since i was about 8 years old.
Ky used to play that loud so i could hear it down the street.
Standing on a corner is cool too

Hey pallie, likes Levi dude, likes I thinks it is so so cool that you came to know, love, and honor our most beloved Dino at such a tender age! Keeps lovin' our lovin' Dino!