Hey pallies, likes followin' on the heels of yester-Dino-day's Dino-musical post on "Gentle On My Mind" from our Norweigen pallie Erik, we turn to 'nother musical blog, "The Dark Forest" where blogger "Cerpts" has done an outstandin' job of celebratin' that fabulous Dino-winter-disc, "A Winter Romance."

Cerpts proclaims the mission of "The Dark Forest" by sayin', "we will reach under a pile of leaves (almost) every day and pull out a favourite album to listen to. These will not be reviews per se but will feature facts, track lists and personal impressions on much-loved albums.

Well this dude's homagin' of our Dino's totally cool winter al-b-um certainly fits this blog's mission statement. It's clear that Cerpts finds so so much pleasure in this classic Dino-disc and he does an outstandin' job of relayin' the vital facts and figures, includin' sharin' some delightful impressions of Dino-excellence!

As the weather chills outside in many parts of the northern hemisphere, Cerpts has given us an outstandin' reminder of how our Dino heats thin's up in "Winter Romance."
Thanks pallie Cerpts for liftin' up our Dino in this way and givin' your readership a green light to go straight to Dino! To view this in it's original format, likes just clicks on the tag of this Dino-post. Dino-warmly, DMP 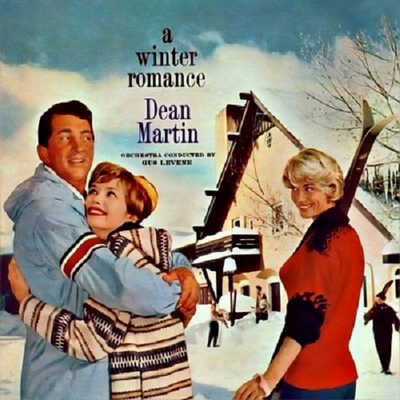 IMPRESSIONS: I just love that cover; Dean Martin personified! Like I say down there, this isn't truly a Christmas album but an album featuring songs with a winter theme. The title track is actually one of my favourite Dean Martin songs of all-time and it was written by Sammy Cahn & Ken Lane specifically for this album. As far as the Christmas songs go, Dino offers seminal versions of "Rudolph the Red-Nosed Reindeer" (or "Rudy" as he calls him), "Let It Snow! Let It Snow! Let It Snow!" and even "White Christmas". Sadly, the tempo for "Baby, It's Cold Outside" is too rushed; even if the concept of replacing a single dueting partner with an entire chorus of women IS a riot!

FACT SHEET: A WINTER ROMANCE is Dean Martin's sixth long-playing album and his first "Christmas album"; although itunes quite rightly points out that it's more a "seasonal" album of winter songs than a Christmas album. The orchestra is conducted by Gus Levene.
Posted by dino martin peters at 7:05 AM

This is one of the best Dino covers i ever saw

Hey pallie, always so wonderful to hear from our Deanger Levi...and likes of course dude, I totally totally am likes in Dino-agreement with you man! Keeps lovin' our Dino!