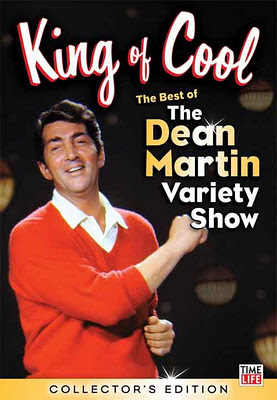 Hey pallies, likes today's Dino-gram is a reminder from our pallies at "TV Shows On DVD.com" that the second batch of Dino-dvds from the folks at Time-Life are bein' released this comin' Tuesday, November 8. As I mentioned earlier in a comment to one of our ilovedinomartin pallies, I indeed just couldn't wait to gets my hands on this new six Dino-disc release and ordered the single disc edition released 'bout a month ago.

Likes was it everythin' my little Dino-heart desired....gotta 'fess up that that answer woulda be a resoundin' no...but I am receivin' mucho mucho Dino-pleasure from what is there....includin' our Dino singin' a solo tune and our great man singin' a song with the fabulous golddiggers!

And, I so loves that a couple of the shows on the first disc of this new set includes shows from later in the series...1971 and 1973...and I loves the last few years of the Dino-show's run even more then the stellar early years...'cause I thinks our Dino became even more likes his hip, cool, and randy entertainer persona....our Dino's was more and more liberated in his life style to be who is was meant to be!

So, just a little reminder pallies that the second set tagged "The Dean Martin Show -King of Cool: Best of Dean Martin Variety Show" will be in the stores on Tuesday. Got my set on order from a local store and am waitin' with baited breath to hear the news that it is in.

Thanks to the pallies at "TV Shows On DVD.com" for this timely reminder of even more Dino comin' our way. To view this in it's original format, likes clicks on the tag of this Dino-message. Dino-lertin', DMP
The Dean Martin Show - The King of Cool: Best of Dean Martin Variety Show 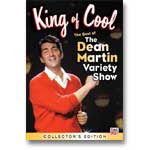 The Dean Martin Variety Show first aired on NBC in 1965 and remains a one-of-a-kind in the history of TV. For almost ten years Dean captivated the public, showing us he could do it all. Whether it was Dean's familiar entrance sliding down a pole or the famous living room door, where you never knew who was going to walk through, Dean captured all of us with his easy informality and incomparable charm and talent. He was a buddy to all the guys and a darling to the ladies...today, he's cool to all ages!

This information is not complete and will be completed when the information or time becomes available
Posted by dino martin peters at 7:06 AM