I really love Dino's light performance, it sounds so utterly unrestrained and elegant.... 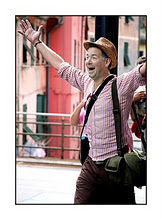 Hey pallies, likes today we gets to introduce you to 'nother great international Dino-devotee. His tag is Erik Valebrokk, he hails from Oslo, Norway, and his self-tagged blog is "Erik's musical diary." Erik "used to be a music journalist," and thus it is particularly gratifyin' to know that Erik "gets Martin" and is proud to share his passion for our most beloved Dino.

Today's post features Erik's deep, pure, and true Dino-appreciato for our great man's singin' of the great song "Gentle On My Mind." Mr. Valebrokk points out while Mr. John Hartford wrote this song, and Mr. Glen Campbell took this song to Billboard's Top 40, it was our Dino...yes, our Dino who "in 1969 took the song to number 9 on the Billboard Easy Listening chart and to number 2 in the UK, making it the highest-charting version of all, and that's more than 300 different versions."

Gotta 'fess up that I didn't know all those stellar Dino-details! ilovedinomartin is thrilled to introduce all you dudes to 'nother unabashedly open lover of our most beloved Dino, and we say our thanks to Mr. Erik Valebrokk, for featurin' our Dino in such a lovin' way at his musical blog. To view this in it's original format, likes just clicks on the tag of this Dino-gram. Dino-devotedly, DMP


Dean Martin - Gentle On My Mind

In 1967 the American bluegrass and country performer John Hartford released his second album Earthwords & Music, featuring his most famous composition, "Gentle On My Mind". Although Hartford's version was only a modest success, Glen Campbell sang the song to the Billboard Top 40, and helped Hartford net two of a total of four Grammy awards the song won in 1968. Campbell's version still didn't reach higher than 39, and in 1969 Dean Martin took the song to number 9 on the Billboard Easy Listening chart and to number 2 in the UK, making it the highest-charting version of all, and that's more than 300 different versions. I really love Dino's light performance, it sounds so utterly unrestrained and elegant with his voice carrying the beautiful song, and the arrangement is just as perfect. 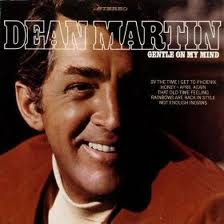 I love Deans version of Gentle on my Mind, it`s been one of my big favourites all my life.
I also like Glen Campbells version but for me Dean did the best version of this song.
I knew this song was a big hit in England and having a few Dino Pallies in England, I discovered this song was almost as popular as ELS.
I`m 21 years old and have been listening to this song for most of those 21 years and it sounds just as fresh now as it was when I heard it as a toddler.
Deans songs will never grow old.
Hugs n Kisses
from Kylie xxxoooxxx

Hey pallie, likes Miss Ky, when you sez, "Deans songs will never grow old," you are speakin' the absolute, total Dino-truth! Thanks for the Dino-patter, and, of course, keeps lovin' our Dino!