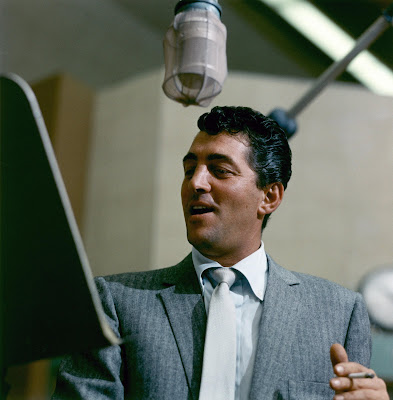 Hey pallies, likes when I read these openin' Dino-remarks, "Dean Martin is, hands down, my favorite entertainer," I knew I was 'bout to strike Dino-gold. From the self-tagged blog, "Hey Pally's 78 r.p.m. Page," Mr. Hey Pally (loves that tag!), speaks of comin to deep, pure, and true Dino-devotion only after our most beloved Dino's death...and after seein' his grandmother's tears on Christmas Day while listenin' to "Innamorata" from "Artists and Models." Likes always loves to hear each and every pallie's story of bein' found by our Dino.

Well, Mr. Hey Pallie is huge into collectin' 78's of all sorts includin', likes of course, our Dino's earliest efforts. He speaks in his blog post of pretty easily gettin' all our great man's great platters from Capitol, but the much harder effort of gettin' those earliest Dino-releases in the pre-Capitol days.

Very cool to learn that this Dino-holic has been able to acquire all but one of those 78's...one recorded in 1947 on the Embassy label. He sez that he has never ever seen one of dem for sale, and rightly wonders if any are still in existence.

Just wonderin' if any of our readers can shed any Dino-light on this dude's Dino-quiry? Likes ilovedinomartin thanks Mr. Hey Pally for sharin' his Dino-devotion so so openly with all his readership...always so so thrilled to met 'nother Dino-addict! Does hope that one of our faithful ilovedinomartin readers might be able to bring some Dino-light to his Dino-wonderin'. To view this in it's original format, just clicks on the tag of this Dino-message. Dino-awed, DMP

Dean Martin is, hands down, my favorite entertainer. My late Italian Grandmother would play his albums constantly on her wall length Sears console stereo. She had the scratchy vinyls stacked on the automatic changer spindle as high as it could possibly go. Every once in a while she would have to get up and nudge the needle that had became stuck in an endless skip. (I would later give her cd's of every Martin track, but as grateful as she was, she still spun the wax.)

Unfortunately, I did not come around to Dino's music until he passed away. Even though it was Christmas day, Grandma was not in a joyous mood. While one of his cd's was playing in the background, a song that I had heard countless times before, finally resonated with me...Innamorata. I saw how it brought tears to my Grandma's eyes.

Since I was just starting to collect 78's at this time, I thought it would be fun to also round up some of Dino's tracks. Purple Capitols were able to be found in abundance everywhere I looked. Even grabbed a few on eBay for next to nothing.

Then I discovered that he had recorded 10 sides...5 discs...before he embarked on his massive Capitol output. In the 16 years that I have been collecting Martin 78's, I have all but one of these five. It hasn't been the case of being outbid at the last second or finding it in an antique store, only to be cracked or unplayable...it's that I have never come across one...online or in person...for sale, on display, mentioned or otherwise.

In late November of 1947, Dean Martin recorded One Foot In Heaven and The Night Is Young And You're So Beautiful for Embassy Records just before a recording ban went into effect on January 1, 1948.

Of course this is probably the most coveted Dean Martin 78 out there...but I'm starting to wonder...are there any even out there...other than the pics found in a book included with the box set of cd's I have? (see below) 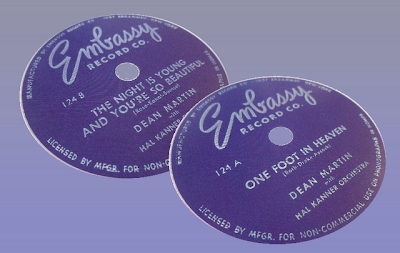 I'm going to have a heckuva time making my way through all of your posts.

Thanks for "meandering" your way to my blog and linking at your site. I have reciprocated the gesture.

Hey pallie, likes man so glads you digs this humble little Dino-pad...I was thrilled to read of your Dino-devotion. Hopes you enjoys the many and varied Dino-reflections found at ilovedinomartin...keeps lovin' our Dino and hopes to hear from you soon.

Hey pallie, likes btw dude, thanks ever so much for creatin' the Dino-link...so so appreciates your help in spreadin' the Dino-message of cool...

Great find! I had no idea that our Dino had released any tunes on 78s!

Hey pallie, likes Miss AOW, so glad to be of help in your Dino-education....indeed no matter what Dino-details we know, there will always be tons more Dino-knowledge to acquire! Keeps learnin' and lovin' our Dino!

Congratulations on a great collection :)
My dad collected every Dean Martin 78 he could find over a period of about 40 years.
To save time looking in the boxes and with my butterfingers possibly dropping one, lol
I asked my dad about the 1947 Embassy 78 and this is one he was never able to find, the other one being a Capitol 78 Dreamy Old New England Moon.
I think if there is a 78 of One Foot in Heaven out there it would be a valuable collectors item.
Dean recorded 2 78s for Diamond Records in 1946 then recorded another 2 for Apollo 1947 to 1948 and then recorded the one 78 for Embassy in 1949.
And then started recording for Capitol.
This is only according to the discography I have so I might be mistaken but I have that Embassy 78 listed as being recorded in 1949 not 1947.
But you could very well be right.
I will write to a close friend and ask him to check his listings.
Nevertheless from what I`ve been told this 78 seems impossible to find, but I wish you luck and hope someday you come across one of these :)
Hugs n Kisses
from Kylie xxxoooxxx

Hey pallie, likes thanks ever so much Miss Ky for sharin' your Dino-knowledge on this topic...I was sure you woulda be of Dino-help on this. I left a post at Hey Pally's pad to encourage him to read your Dino-reflections. Keeps lovin' our Dino!

Kylie, thanks for the story of your father's collection...very inspiring...sorry to hear that he hasn't found the Embassy either.

The Embassy was recorded in November of 1947 right before the year long recording ban went into effect on January 1, 1948. I have seen where it wasn't released until 1949 though. He was already with Capitol by this time.

In the meantime...I'll keep looking for that record.

Hi HeyPally,
Thankyou for explaining to me that the Embassy 78 was recorded in 1947
but not released until 1949.
I have this 78 listed as being released in 1949 but I don`t have an actual recording date so I`m learning something new about Deans career every day :)
I hope someday you find that 78, if you do, I`d love to know.
I was so delighted a few months ago when they found the lost Capitol recording Rock a Bye your Baby and released it on cd.
When I first heard about this lost song years ago I thought it would never be found.
So that only goes to show, never give up hope.
I know someday you`ll find that Embassy 78 and complete your collection :)
Hugs n Kisses
from Kylie xxxoooxxx