Dean said, ‘What a way to spend the day—being in bed with one of my best friend’s fiancée.’”

Hey pallies, likes gotta say dudes that my Dino-surfin' of the web to brings youse pallies the grooviest of the groovy Dino-devotion likes keeps payin' off the hugest of the huge Dino-dividends!

Case in point, just the other day likes came 'cross this swingin'est of the swingin'est 60's pad, "Sixties Cinema...Tom Lisanti's books on '60's starlets & B-movies." Well, likes how coulda a hipster dude like Lisanti not have a post on our Dino as Matt Helm...the hippest of the hip swinger spy flicks?

Indeed today's Dino-gram puts the accent on Mr. Tom's rad report, "SLAYGIRLS RING, ARE YOU LISTENING," on our most beloved Dino and the bevy of beau-ti-ful chicks that surrounded him in the '60's Helmer flicks. Listanti truly "gets Martin" speakin' of him as "debonair Dean Martin."

Mr. Lisanti puts his readers on to an fab piece of Dino-Helmer-prose from our pallies at "CINEMARETRO" tagged "MR. HELM GOES TO HOLLYWOOD." Likes if you clicks on the tag of this Dino-gram you will gets to "Sixties Cinema" where you can catch that link. Tom also shares the terrific trailer from Helmer numero tres, "The Ambushers" that feature "those ever-lovin' Slaygirls."

The Pièce de résistance of Listanto's Dino-litany is an excerpt of an interview that he conducted with Miss Corinne Cole who played Miss January in Helmer numero
duo, "Murders' Row." The interview is contained in Tom's tome, "Glamour Girls of Sixties Hollywood." This very revealin' reflection my Miss Cole is cetainly worthy of all the Dino-attention that all us Dino-holics can muster.

Words simply can not express my likes total Dino-delight to have been Dino-directed to Mr. Tom Lisanti's blog post on our Dino as Matt Helm. Huge thanks to Mr. Lisanti for sharin' this with all his readers...and certainly makin' the day of tons of ilovedinomartin readers. Keeps lovin' our Dino pallies! Dino-awed, DMP

SLAYGIRLS RING, ARE YOU LISTENING 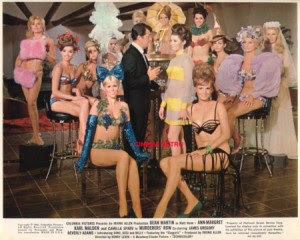 Click the below link to read a wonderful article about how secret agent Matt Helm went from hardboiled espionage tales in print to pop camp-filled stories on the big screen when played by debonair Dean Martin opposite some of the big screens most beautiful women in The Silencers (Stella Stevens, Dahlia Lavi, Nancy Kovack); Murderers’ Row (Ann-Margret, Camilla Sparv); The Ambushers (Senta Berger); and The Wrecking Crew (Elke Sommer, Sharon Tate, Nancy Kwan, Tina Louise). Helm, masquerading as an international photographer, was assisted by amorous secretary Lovey Kraveszit (Beverly Adams) and surrounded by a bevy of sexy starlets as models called the Slaygirls or Slaymates.

One of the Slaymatess was Corinne Cole in Murderers’ Row (1966). Below is an excerpt from my interview with her for Glamour Girls of Sixties Hollywood:

In Murderers’ Row (1966) Cole brought new meaning to the term Slaymate as a seductive “Miss January.” Wearing a body stocking and two pink muffs on her hands, the pin-up poses in front of a map of Minnesota for the Slaymate calendar. After the shoot the seductive beauty sneaks into Helm’s bed and snuggles up to him. Tired he asks her to leave and “to go out like a lamb” in which she retorts, “That’s March. I want to wish you a happy new year” and begins kissing him. But this slinky seductive Slaymate has murder on her mind not romance. Alas her nefarious plan goes awry and ends not with a bang but a boom. 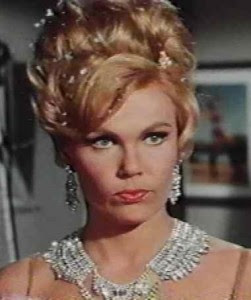 Cole recalls “Nancy Kovack was in the first movie [The Silencers] and she was scheduled to play Miss January in this. In between movies she married the great musician Zubin Mehta and passed on the film at the last second. My agent called me and I went to Columbia Studios to read for the part. I did not tell anybody that I knew Dean Martin socially. I had to audition for this role five times until director Henry Levin finally offered me the part.

When I got on the set for the first day of shooting, which was our love scene in bed, Dean Martin said to me, ‘This is a hell of a way to miss my best friend’s wedding.’ Frank Sinatra was marrying Mia Farrow that day at the Sands in my apartment. I said to Dean, ‘Yes, we are missing a big day.’ Nobody outside the Rat Pack knew they were getting married. It was very funny to us. I had a body stocking on because I was supposed to be nude but we couldn’t get the shot because my bra was showing. Finally I said, ‘Frig it! I’m taking off the body stocking!’ They closed the set for me and we got the take. Dean said, ‘What a way to spend the day—being in bed with one of my best friend’s fiancée.’”
Posted by dino martin peters at 7:23 AM

Ha Ha!!! Love that Helm trailer! The go go dancin' cracks me up every time!;)

Hey Dino Dude,
I really dig it when you have stories and pics of the Matt Helm movies.
Really dig the Slaygirls, think i told you Ky has posters of each girl from the Slaygirls, wish i had them, they would be on my wall.
I remember Miss January.
Like it when Dino is dreaming of the girls and singing
Bye from Levi

Hey pallie, likes Danny G....while Helmer 3 is the least of the Dino-helm-pleasures, the trailer is such such Dino-fun. Keeps lovin' our Dino!